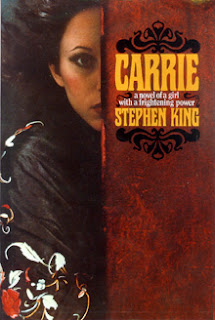 I don't know that I really believe in archetypes in any deep sense.  Peruse Dr. Wikipedia's description:  I think that in any semiformal setting (a class, for instance), the farthest I'd go is the literary archetype that's essentially just a stock character.  I wouldn't argue that these are rooted in much more than convention, and certainly not in a collective unconscious or species memory.

I wouldn't argue that because I'm not intellectually persuaded.  But I'll admit that I'm sometimes emotionally persuaded.  Sometimes I'll encounter a character or a situation in a book or a film that seems so deeply rooted in common human experience as to make me believe that there is such a thing as common human experience, that seems like it's tapping into such a deep and strong vein of feeling that I feel, at least while I'm feeling it, that this feeling must be flowing from some place beyond my own autonomous and cellular self.

Carrie is one of those characters, and King's success here far outshadows whatever he accomplished with the other two books of his that I've read entirely because Carrie is archetypal.  The menstrual blood, the uncheckable rage, the confidential high-school torment, the religious repression - all the factors that go into making Carrie what she is in this book speak to such primal fears and desires, such essential passions, that she seems to have always been there as a character.  She transcends the page.

She is an archetype.  I already loved her before I met her:  I loved her as Willow in Season 6 of Buffy, I loved her as Phoenix in the third X-Men movie.  And, as in both of those cases, I rooted for her.  How can you not?  How can you not root for her when she's finally making the world pay for everything it's done to all women for all time?  It's incredibly cathartic.

Carrie rules.
Posted by Tanuki at 11:26 PM No comments: 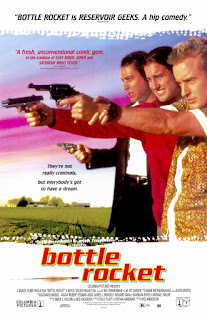 Bottle Rocket, in retrospect, feels like almost a parody of a Tarantino film.  Or if not a Tarantino film, then one of the plethora of Tarantinoesque films that popped up in the mid-'90s in his wake.  There's no way for anybody who wasn't there to imagine how many films about gabby hitmen and quirky small-time crooks came out in the '90s.

Had it been written fresh in '95 or '96, I'd conclude that's what Bottle Rocket was (among other things).  Check the poster - that's how it was marketed.  But the small-time crook kernel of the film can be found, intact, in the 1992 short that the feature grew out of, and I think '92 was a little early for a Tarantino parody.  Which means that there really must have been something in the water in the early '90s.  Why the sudden renaissance in the heist flick, however loosely defined?  Was it a grunge thing?  A post-Cold War thing?  I was there - Anderson's my age - but I confess I never understood it.

Yes, I missed this at the time, too.  I saw it now in an effort to catch up on the Wes Anderson I missed - I came in at Royal Tenenbaums.  This one, maybe you had to be there for.  The acting is fine, the writing fine, the characters reasonably subtle and pleasantly offbeat, but the small-time crooks motif feels so dated now that I found it off-putting.  I definitely think Anderson only came into his own when he surrendered to his inner Salinger and started making every film a secret adaptation of part of the Glass family saga.

The best parts of this, after all, are Anthony's very Holden Caulfield-like scene with his little sister Grace and his early scenes with Ines:  like Seymour in "A Perfect Day for Bananafish," with the water, the innocent girls, and the shell-shocked young man.
Posted by Tanuki at 11:25 PM No comments: