Machida Kō 町田康.  Kiregire きれぎれ.  2000.  Co-winner of the 123rdA-Prize, for early 2000.  The title story was the winner.  The title could be translated as “Fragments,” and rarely was a story more aptly titled.  Kind of painfully obvious, actually.  Not the only thing painful about this story.
This is one that, I think, makes best sense in terms of authorial biography.  The author, in 2000, was already a celebrity:  an ex-punk rocker who had gone solo and branched out into acting (TV, film, commercials) and then writing.  He published a couple of books of poems before turning to literary fiction.  He wasn’t necessarily a youth-culture figure in 2000 – he was 38 – but he was already a cult figure, and his prose was, evidently, building up something of a buzz.  And now’s the time to confess that I never noticed any of this personally:  with my spotty-at-best knowledge of Japanese rock history, I never heard of him, and never read him until my A-Prize spelunking took me back to early 2000. 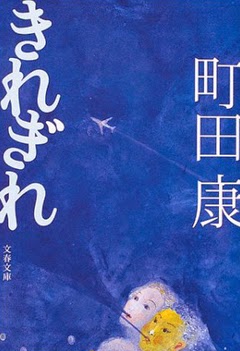 It’s cynical to say that giving the prize to him was an attempt by the Prize committee to stay relevant.  So I’m not going to state that categorically.  But I will say that this is the only way I can wrap my head around it.  Because (echoing what some of the committee members themselves said) I can’t see the attraction of this story otherwise.
Yes, it’s fragmented.  Plot summary is not going to be real helpful here, but it basically seems to be about a failed/failing painter and the mess that is his personal life.  Poverty, unhappy marriage, dissolution, rivalry.  It’s hard to make sense of it all on a plot level, though, because it’s narrated (by the painter) in such a, well, fragmented, stream-of-consciousness way.  Not in and of itself a bad thing, or a good thing, just a thing.  It’s all in what you do with it.
What Machida does with it is, essentially, indulge his fondness for wordplay.  “Wordplay” seems to promise too much, though.  He’s amusing himself with words, surely;  but as a reader (one who normally delights in wordplay, I assure you!), I seldom felt much joy in it, much sense of play.  I wasn’t amused, dammit.  It’s all very clever, smart, whatever, but the reading experience – hacking through this writer’s digressive, distractable, attention-grabbing style to try to get a handle on what the hell he’s actually trying to say – was dreary where it should have been fun.
Maybe it didn’t have to be fun.  Wordplay isn’t always about pleasure, of course.  Kuroda Natsuko gave me similar headaches through her relentlessly inventive/destructive use of language.  But as hard as I found it to admire Kuroda I could at least see, or imagine, what she was aiming at.  I could recognize something worthwhile there, and occasionally appreciate some of her more baroque constructions.  (I’ve taught her, in small doses, a few times since writing my review, and I’ve mellowed on her considerably in the process.)
I don’t see anything like that with Machida.  He’s not fun, but neither does all his language-twisting seem to be aiming at some radically new mode of expression, so that he can get out something that needs to be gotten out.  The loser failed artist who makes life miserable for himself and those around him is a pretty hackneyed literary trope, after all – a Naturalist chestnut, really, but he doesn’t seem interested in any of the edifying excoriation of self that they brought to the idea.  The impression is of a bored narrator playing with the reader’s head for no reason other than because he can.
Reading that makes it all sound very punk, right?  But no:  it’s far too self-indulgent for that.  “Self-indulgent” is a word I try not to throw around lightly:  I believe most art is profound self-indulgence, and that’s a good thing, since the road of excess leads to the palace of wisdom, etc.  But self-indulgence was one of the critical terms that punk (and its champions) used to define itself against the stuff that had come before.  ‘70s classic rock was about excess, about self-exploration, about drama, while punk was supposed to be a return to basics.  Discipline was at the heart of it, even at its most corrosively antisocial:  attitude as a weapon, musical fun subordinated to power of statement.  But I don’t get that here:  no big artistic statement, no rebellion against society.  Just boredom, and wanking.  Punk is supposed to be anti-wanking.

Anyway.  I don’t get this story.

I don’t get the other one in the volume, either:  Jinsei no hijiri 人生の聖 (“Saint of Life”).  There’s no point in summarizing.  It’s more of the same, essentially.  This one revolves more around worklife;  at some points the narrator seems to be working, or remembering working, as a salaryman, while at other points he’s a janitor, and then sometimes he’s begging.  But like the first story it displays a combination of wilful pointlessness and resolute tediousness:  it’s literary nonsense, but with none of the delight that term promises.  Your mileage may vary, as they say.