If you're a film buff at all (and I make but the modestest claim to that title) you know this story.  It's 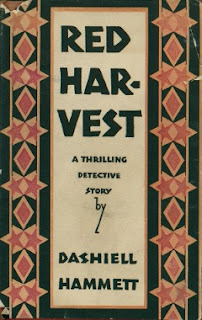 an archetypal set-up:  free-agent-provocateur comes to town and plays both sides off each other.  But it had been a long time since I read the real thing, and as much as I love Kurosawa and respect Leone (let's leave Hill out of it), the real thing's still untouchable.  And it's because the specifics are as important as the archetypal set-up.

Maybe it's just because I've been paying a lot of attention to Erik Loomis's occasional history of American labor, but the prominence of labor-capital tensions is what really impressed me about this book, this time through.  I mean, first of all, a thriller that even acknowledges these issues, even as a subtext, seems unthinkable today in America.  The labor point of view has been all but banished from our popular culture.  But in Red Harvest it's there;  not that the Continental Op himself is much more solid with the working man than his myriad action-hero successors, but the corrupt fiefdom he's there to topple, or at least stir up, is so clearly meant to be a stand-in for the authoritarian, exploitative early-20th century model of American capitalism.  Which, of course, is looking quite familiar again today.

That's another thing that makes Hammett literature, in my book.  He doesn't just assume, unargued, a corrupt system against which his hero is counterposed;  he argues it, depicts it in full menacing flight.  This isn't "a thrilling detective story," for all the quaint claim of the original cover.  It's a carefully-framed and -focused view of a whole society.  All of America (all of humanity, I guess, given the on-the-nose place name) as Personville.
Posted by Tanuki at 10:20 PM No comments: