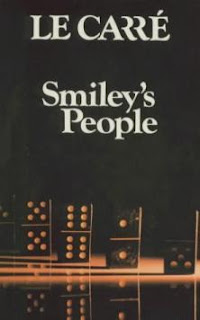 The missus' reading of the film version of the first book, suggesting that we could suspect Smiley himself of being the mole, turned out not to be tenable in the book itself.  But she was on to something, of course, because by the end of the third book, the parallels between Smiley and Karla are almost painfully inescapable, and at the end of the third book we're forced to think that, for all intents and purposes, they're no different.  Or maybe Smiley's worse.

In other words, this book is just as full of that intoxicating Cold War pessimism as the first two were.  Stings like whiskey going down.

But of course what Le Carré gives us is more than just trenchant commentary on the Cold War.  What we realize at the end of this book, when the man we all assume to be Karla (itself an assumed name) walks out of East Berlin, is that this enemy, this nemesis, this namesake for the trilogy, has been entirely unglimpsed until now.  All we've "seen" of him is a single encounter, shrouded in mystery, buried in the past, given to us only in Smiley's deadened memory.  Everything we (i.e. the Circus) "know" about him is speculation - worse, deduction.  Karla is as much as anything a construction of our minds, based on ambiguous clues and tortured logic, and suspicion.  Which isn't to say any of it is wrong - after all, he does come walking out of East Berlin, and he does have Ann's lighter - but a correct guess is still a guess.

Schrödinger, Heisenberg, Derrida:  all the ontological nyets that haunt the modern solipsistic consciousness.  Le Carré gives them all to us in Smiley and Karla.  But the genius of it is that this isn't a piece of navel-gazing, ennui-ridden literature - following Vonnegut's advice, the characters all want their own glasses of water - there are stakes here.  It matters whether or not the cat is dead.  The popular fiction nature of it demands it, but more than so does the urgent emergency of the modern world (that's why the second book is so important).  Smiley, or Karla, ponder silently in London or Moscow, and another bomb goes off in Vientiane.
Posted by Tanuki at 12:12 PM No comments: 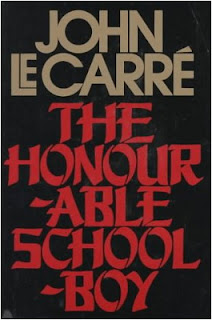 The old BBC adaptations of these books skipped this volume, and it sounds like the new film series will too.  I guess I can see why, if you see the project as a star turn for Smiley/Alec Guinness/Gary Oldman.  Smiley's certainly a major character in this book, but he doesn't dominate it like he does the first and third books of this not-really-a-trilogy.  Here he divides our attention with a field agent, Jerry Westerby.  Who's almost as interesting a character in his own right - Le Carré's people are just as compelling here as they were in Tinker, Tailor.

But really Westerby is just a vehicle, a set of eyes, to get us, the reader, into the field.  The first and third books are mostly armchair spycraft - almost all the work takes place in Smiley's head.  Here we're thrust out into the world.  A world that's falling apart:  Southeast Asia in the wake of the US debacle there.

That's the overriding impression this book leaves with me.  Actually most of the field agenting parts of the book take place in Hong Kong, which gets echoes of the war but not much else, but it's the tour of Cambodia, Vietnam, Laos, and Thailand in the last third of the book that really sticks with you.  We don't actually see many Americans - they're conspicuously absent, busy getting airlifted out of embassies.  Nor do we really see much of the actual killing fields.  We get a lot of bombs, random bullets, junkies, casual corruption, and violence just around the next bend.  In other words Le Carré is giving us the feeling of touring a war zone, rather than fighting in it.  That's scary enough, and allows us to preserve something of the journalist's objectivity (back when there might have been such a thing).  No room for obfuscation:  look at what the US did.  Look at the world we made.
Posted by Tanuki at 11:58 PM No comments: