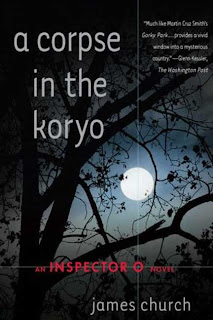 The Tanuki is focused exclusively on Japan now, but it so happens that as an undergrad he was a Japan/Asian Studies double major. Never studied Chinese or Korean language, but took his share of classes about them. Was firmly committed to trans-regionalism.

One of the most interesting classes he took was one on Korean politics. This was fascinating for a number of reasons. First there was the savory weirdness of being the only Japanophile in the room: the rest of the class was Koreanists. Americans who study Asian languages and cultures tend to internalize the prejudices of the culture we study, meaning I was getting cold stares from all these white Korean-studies kids for having the temerity to study Japan - didn't I know what Japan had done to Korea? Weird...

But that was the least of it. The instructor was the real trip. He was not an academic, but a recently-retired government guy (I forget which branch) who had spent most of his career observing North Korea professionally. So part of the time he'd lecture on orthodox topics, South Korea over the most recent couple of decades, its transition to full-fledged democracy, and how that democracy worked and didn't work - this would have been 1995 or 1996.

And part of the time he'd bring in printouts of the latest State (I think) Department updates on the situation in North Korea, presumably nothing too secret but definitely more detailed than what CNN was feeding us (and this was back when CNN actually tried to report news). And then tell us What It All Meant. Like, the fact that this particular military unit had been spotted moving around up by the Chinese border probably meant that thus and such a faction's fortunes were on the rise, or the fact that the regime was admitting to X amount of crop failures probably meant that the actual failures were 3X. He had old Kim Jong Il's number, it sounded like. Again, this was '95 or '96, the height of the famine, but very little news was getting out. Based on what he was telling us (and he had this very intense, knowing, worldly air about him, almost as good as Donald Sutherland in JFK), we were all sure that the regime was going to fall by the time finals rolled around, and we were going to have a front-row seat for it, as it were.

Assuming that "Church" is better informed than the guy the Tanuki studied with, this is an amazing portrait of that country. He succeeds in humanizing his characters, without either downplaying the oppressiveness of the system they live under or resorting to making any of them martyrs for a resistance movement. That would have been easy; instead, he gives us people who have their grievances against their government, and sometimes yearn to be elsewhere, but still recognize North Korea as their home. I say he humanizes the North Koreans, and really I think that's the book's greatest accomplishment. The Kim dynasty have been such cartoonish dictators, and the Arirang Festival is such a bizarre and creepy spectacle, that in a world of unfathomable complexity the temptation to seize on North Korea as a simple enemy has been basically irresistible. People talking about mass insanity and stuff like that. Right. That's not what Church gives us. He gives us ordinary people living under pressures most of us can barely imagine, and then acting pretty much like we would.

Empathy is still the hardest thing to achieve.

As a thriller, it's pretty good. It doesn't really give you the standard thrill of putting together a puzzle as a case is gradually, or even suddenly solved - most of the time we're in the dark, right along with the protagonist Inspector O (that's not an initial: that's his name). It's more spy novel than crime novel, really; it's all about how people protect themselves in a situation where nobody can be trusted. O's paradox - how to solve crimes in a climate where knowing anything, learning anything, can potentially damn you - is one I found moving.

Tea. Church takes a page out of somebody's textbook on how to construct a thriller and gives his character a mundane want that is never fulfilled. O wants a cup of tea, and spends the whole book looking for one. As a ploy for constructing suspense and revealing character it does feel a little mechanical, but it is effective, and the choice of tea as the elusive object of desire is a good one: tea being so abundant in East Asia, its scarcity in O's North Korea is particularly resonant.

Turns out there's a minor, possibly abortive, attempt at an Internete meme surrounding Pyongyang's traffic girls. Sign me up. They're very cute.
Posted by Tanuki at 9:39 PM 4 comments: