We have a little colony of middle-aged manga readers here in the Wetwang, and one of the things we've been passing around among ourselves lately is this series. Hyouge-mono へうげもの, by Yamada Yoshihiro 山田芳裕. It's been going on since 2005, and it's up to the eleventh volume. I've read ten.

(The title itself poses interesting problems. Based on how it's pronounced, standard romanization would be Hyôgemono; the publisher romanizes it Hyouge-mono, following the romanization system taught in schools in Japan, which doesn't use macrons or (or the circumflex, the poor man's macron). But that's not what's interesting: it's that the Japanese title uses old orthography. In modern usage, the word would be written ひょうげ者, but the author has chosen to use the old-old-fashioned へうげもの, which does have a certain pungency. I deal with a lot of of old orthography in my day job, and I'm always tempted to romanize it as-is, to reproduce the old flava. So we could think of this as heugemono. The problem is it wouldn't be pronounced that way, any more than people would have actually said "ye olde" with a y sound. ...I really ought to leave this kind of thing to No-sword-san, though. He's better at it.)

(Oh, yeah, the word itself, what does it mean? Ye Buffoon, maybe?)

Heugemono is about Furuta Oribe, a late 16th-century warlord and tea master. Thus, this is approximately the three-millionth pop-culture retelling of the Nobunaga-Hideyoshi-Ieyasu era. A tired subject, to say the least, but Yamada manages to breathe a little life into the old triple corpse.

The gimmick is that this is a history manga, yes, but also essentially an educational manga. That is, by tracing Furuta's interest in tea and its culture, the manga is doubling as a crash course in Famous Tea Bowls, their manufacture, appraisal, and collection.

That goes a long way to explaining why Mrs. Sgt. T, the art historian, loves this manga. I love it for different reasons.

First of all, the art. Yamada has a wonderfully thick, bold line, simultaneously giving his characters solidity and volume and also knocking you out of the story a little bit so that you get stuck on their poppish perfection. Meanwhile, his mise-en-scene - what he chooses to show you and how - is masterful, making use of inventive panelization, closeups, beautiful detail, and an excellent design sense. All of th 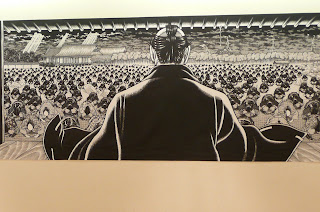 is is in service of a visual vision that includes both the grittiest battle scenes and the goofiest spit-takes, plus the occasional sex scene (there's an unmistakeable whiff of dirty old man wafting from the pages, but it's appropriate).

Second of all, the subtext. Yamada is intentionally paralleling the aesthetic impulse with the imperial: for Furuta and the other characters, art collecting and territorial conquest are one and the same. The desire to fully articulate, realize, and promulgate a particular ideal of beauty shades over into the desire to expand one's rule by force. Sen no Rikyû, in Yamada's vision, is every bit as manipulative, as lustful for power, as violent (in a spiritual if not a physical sense), as Hideyoshi.

This is a brilliant move. We're used to thinking of tea aesthetics in particular as being ascetic, unworldly, antimaterialistic - their embrace by the warlords is usually present 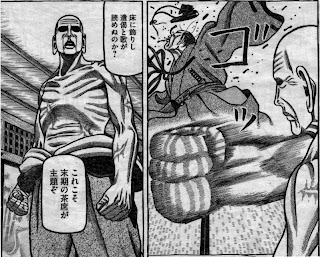 ed as some kind of paradox. Yamada is suggesting that it's not - that the obsession with aesthetic purity and material perfection (even perfection-in-imperfection) fits in perfectly well with bloodlust. It's a fantastic critique of materialism.

But not preachy, either. Here's where the dirty-old-man aspect comes in: Yamada is, I'm convinced, conscious of his critique of the cult of art, but at the same time his love for art, for things, for all that he's critiquing, oozes out of every frame. Mixed feelings: my middle name.
Posted by Tanuki at 4:58 PM 3 comments: