One of the not-so-horrific things about growing old is that you learn stuff.  You live, and you grow, and you know stuff you didn't know before.  For example, you learn how a song like this can be true.  It's a truism but no less true for it that country music, the real stuff, is music by, for, and about adults.  But you don't really get that until you're an adult.  You may like this song when you're 20 or 25, and you may even think you get it.  But I guarantee that you don't get it until you're at least 30.  More like 40. This is adult pain.  The grown-ups are talking now, sonny.  Shut up.

I've got nothing more original than that.  But George Jones was one of the great ones.
Posted by Tanuki at 5:10 PM No comments: 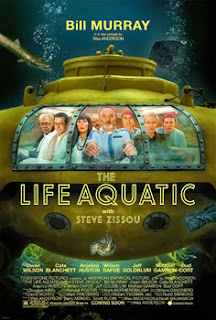 I seem to recall liking this when I first saw it.  Liking it a great deal.  Considering it one of my top
Wes Andersons, in fact. So I was surprised to read up on it and find that it's not well regarded critically.  And I was even more surprised to see it again and find that...  Well, it just didn't work for me this time.

If this were a blog that was consistently trying to apply an intellectual approach to its subject matter, and I was really interested in delineating my vision of Anderson's vision, I could probably note how this fits in with the rest of his oeuvre, in terms of characters, themes, motifs, etc.  Because it clearly does.

But instead I'm just going to try to put my finger on why I was left unsatisfied by my second viewing of it.  Here's what I think is the thing.

I'm a Big Lebowski cultist.  Almost a Dudeist, really.  I've lost track of how many times I've watched that film, and I still find it funny each time.  There are some comedies that succeed like that, where even when you know the punch line and no longer have the element of surprise working on you, you can still appreciate them for the mastery of their timing and calibrated exaggeration, the absurdity of the conception and the brio of the presentation.  Humor isn't just punch lines.

This film contains elements that could have made it a rewatchable success in the manner of Big Lebowski.  It's got a wonderful premise, nicely chosen weird characters, and a suitably shaggy storyline.  Discovering all that for the first time, it was enough to make me laugh.  But it doesn't have the right timing, the right rhythms, for the gags to hold up over time.  I don't know if it's trying to be funny, really;  it might just be satisfied to be whimsical.  But it could have been more.  The material deserves a little bit more than archness.  If Anderson's approach had beckoned us in, rather than distancing us like he normally does, it could have been a comic masterpiece.  It wouldn't have taken much tweaking, even, I suspect.  It's almost there.  But not quite.  Second time around, I found myself appreciating it, but not enjoying it. 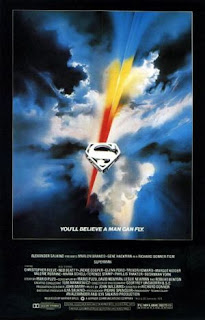 I loved Superman Returns.  I felt like the only one who did - well, me and Mrs. Sgt. T.  So the first thing that struck me, watching the 1978 Superman for the first time in probably a couple of decades,
was how much the later movie was an homage to this one.  I hadn't realized that, actually.  I don't know if it makes me appreciate Returns more or less, to tell the truth.  So much of what I loved about that movie was the religious dimension it invested the Superman mythology with, and now I realize (because I surely didn't pick up on it when I was a kid) that Donner brought that in 1978.

But they're very different movies otherwise.  Part of that is because Superman was the first movie to do this thing that had been done almost ad nauseum (but not to me) by the time Superman Returns did it best.  That is, to take a comic-book superhero and make a serious movie out of him.  It still feels fresh in that sense:  its depiction of other worlds and superpowers is respectful and believing without being stiffly reverent.  It has a sense of wonder about it all, as opposed to a sense of doctrine.

And part of it is because Superman is so very much of its time.  1978 was a moment of great cynicism in American culture - post-Watergate, post-Vietnam, post-counterculture - but that cynicism, at the height of the disco era, was expressing itself in an almost missionary hedonism that coincided with a very humanistic extension of the counterculture ethos.  In other words, the world as we knew it had ended, but we felt fine, and maybe that was going to be enough to see us through.  As opposed to the America into which Returns delivered Superman:  an America that felt itself to be in deep, deep crisis, hopeless, in need of any god but unsure it could believe in one - and sure it wasn't worthy of one.

So the attitude Superman takes toward its god-man is one that no future superhero movie could really take:  one of bemusement.  Super virtue was such a quaint idea in 1978 - everything Superman represented seemed so wonderfully old-fashioned.  It's the jazzed surprise on Lois Lane's face whenever she interacts with Clark Kent that tells the story:  she didn't know they made them like him anymore.  Wasn't sure why they even bothered.  But what the hell, why not?

It's not a perfect movie.  Lex Luthor, as hard as Gene Hackman works to make him vivid, is a cipher:  we don't know where he comes from or why he's so evil, or why he's so weird.  And his dastardly plot, when the movie finally gets around to presenting it, is kind of underwhelming.  And there are a few loose ends in the resolution of the plot (I gather the super-extended version that once played on TV tied them up - that would have been nice).

But what the film gets right, it gets indelibly right.  The poetry, for one thing.  Not just the poetry of flight (and I even like the goofy poem Lois composes in her head while flying), but the poetry of the Smallville skies.  There's a luminosity to the earthbound scenes of this film that is entirely expressive of the Superman mythos.

The answer to the last question, this time, is to make him childlike.  Innocent.  And to play that straight, so that while we may smile at Superman, we never laugh at him, never ridicule him.  To camp up Superman would be the big mistake, and this film never makes it.

Which allows it to gain purchase on the other questions.  It keeps his limitless power interesting by making it clear he's not sure, yet, that it is limitless.  The key line in this regard is when Lois asks him how fast he can fly.  I've never thought to time myself, he says, and this is more than just a joke.  I've seen the question raised:  why can he fly fast enough to turn the world back in its orbit, but not fast enough to stop both missiles in real time?  And I think the answer is that he could have, but he didn't know it - it wasn't until he realized that Lois had died that he decided to really test the limits of his power.

What we've got is a god learning how to be a god.  Of course it is:  like most first superhero movies, this is the Origin Story, and part of that is the superhero discovering his powers, and how to control them.  But remember - this was the first of its kind.  I'm not sure it was an obvious decision to start at the beginning like that, to spend so much time on Krypton and in Smallville.  And in the Fortress of Solitude.

It keeps his limitless virtue interesting by making him human.  Why does he do what he does?  Is it nature or nurture?  Obviously Kryptonians aren't all wise and virtuous, so Kal-El didn't have to be.  He's taught to be, by his earthly father and the other one.  But that means he has to choose to be.  And although it's not hit real heavy in this film, he does have to choose;  the climax of the film is nothing but a choice between virtues, a choice of how to be good.  A choice between helping but not interfering, as Jor-El had instructed him, and interfering, accepting the mantle of godhood once and for all.  He chooses.
Posted by Tanuki at 12:38 AM No comments: