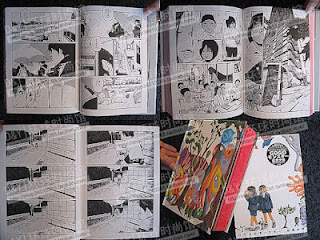 This is the third title I've read by Matsumoto Taiyō 松本大洋:  Tekkon kinkreet is a masterpiece, and Pingpong ピンポン is pretty interesting, too, although I've only read one volume.  This one, GOGO Monster モンスター, is almost the equal of Tekkon, and maybe in some ways superior.

It has the air of a major project:  a nearly 500-page deluxe hardback, written for book publication (i.e., not serialized in a comix mag first).  Therefore:  no episode divisions, only five large chapter subdivisions;  no story recaps, no concessions at all to capturing and keeping an audience.  This is manga as novel, developing characters/story/themes over a long narrative with a beginning, a middle, and an end.

Which makes it, possibly, weird that Matsumoto elected to make it much less coherent on a narrative level, then Tekkon.  And, first of all, they beg comparison:  like the earlier one, this manga concerns two misfit boys, best friends, borderline psychos in a psychotic world.  The older boy is visionary to the point of being unhinged, while the younger boy is touching in his innocence and vulnerability.  In fact, I ended up reading this book as a rewrite of Tekkon - same basic story (down to the unexpected, improbable happy ending).  Meaning the differences end up being more interesting than anything else.

And those differences come down to one move in the direction of greater realism, and one move in the direction of greater surrealism.  The realism comes in the art and the setting:  gone is the krazy topsy-turvy world of Tekkon.  Instead we get a setting that's confined to an elementary school, rendered with amazing impressionistic realism.  I just made that up, but what I mean by it is that his line is shaky, at times deformed, at all times expressive, but beneath it is concealed an almost photorealistic sense of perspective, space, volume, and texture.  It's an amazing combination.

The realism also comes in the fact that, for most of the book, it's clear that the conflicts, the mysterious monsters and otherworlds of the story, are all in the head of the older boy, and maybe his perhaps-real, perhaps-doppelganger buddy (not the younger boy, but a secondary companion who emerges halfway through:  this happens in Tekkon, too, of course).  That is, the line between external reality and internal surreality is much more firmly maintained here than in the earlier book.

But the narrative technique itself - the way characters interact, the way the story moves forward - is very surrealistic.  It's here that you can feel how much Matsumoto was liberated by not writing for a magazine:  he's able to get as abstract in his storytelling as he wants, and that's pretty abstract.  It's actually pretty difficult to follow what's going on in places, especially when we venture into the older boy's internal surreality;  much harder than in Tekkon to assign symbolic referents to the talking bunnies and leering water droplets that we see here.

The tension between these two moves is what makes this both a slightly maddening book and a deeply impressive one.  For those long stretches where you just surrender to the art, to the moody visuality of the thing, it becomes one of the best representations of childhood in all of manga - of the mindset of the misfit, the outcast, in the artificial world of the school, where kids have no sense whatsoever of normalcy, so whatever they see or think they see is real.
Posted by Tanuki at 2:24 PM No comments: