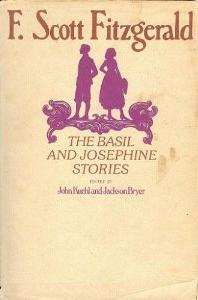 Fitzgerald is a major American writer.  Right?  I mean, not only does he still get assigned in high school and college AmLit classes (frequently and copiously assigned, if the stacks of FSF in my local college-town used-book store are any indication), but it seems that people still read at least some of his work out of sheer interest.  You know, because it speaks to them.

So why is it that his last two short-story collections are out of print?  I'm talking about All the Sad Young Men and Taps at Reveille.  Granted, most of the stories in them are readily available in other collections that are in print - but not all of them.  And even if most college classes (undoubtedly the driving market for this kind of publishing) are content to assign an omnibus anthology to cover Fitzgerald's short stories, surely there are enough seminars out there, and interested general readers, to create a market for his short stories in their original book presentation?

Well, I guess not.

The Basil and Josephine Stories is, then, where some of the contents of Taps at Reveille have found refuge.  I'm not even sure it's not a better presentation of them than Taps is.  I'm totally sold on the editors' argument that all of these stories (not just the selection of them that appeared in Taps) deserve to be read together, in sequence, as a sort of novel-in-short-story-form.  They do have a power and a coherence as a complete set that they would have lacked as a subsection of a more varied anthology;  and that's true even if, as a complete set, they're still incomplete in the story they tell.  As everybody notes, Fitzgerald had intended to have Basil meet Josephine, but stopped writing the series before that happened;  but then again, we kind of know what happens when they meet anyway.  It has to turn out pretty much like the relationship in The Beautiful and Damned, doesn't it?  Or, at best, the one in Tender is the Night.  Basil is a deeply flawed boy, but he has strength, and therefore the potential to overcome his flaws;  but Josephine is a femme fatale, an emotional and moral vacuum powerful enough (because attractive and skilled enough) to overcome Basil's strength.  The irresistible force meets the movable object.

It's a valuable anthology, then, to have in print, and certainly worth a read if you're into Fitzgerald.  Fitzgerald's clear focus on these two characters, respectively, lifts these stories above the run of his other short stories.  They're just as incisive a pair of character studies as anything in his novels, and they make a nice complement to the novels, which focus on adults, rather than adolescents.  And (although I'm less clear on this) they work as nice evocations of the age that produced the classic Fitzgerald protagonists and antagonists.  When I read Gatsby, that is, I tend to think of the characters as expressions of the Jazz Age, but of course they came of age (as people) before that;  what Fitzgerald is doing with these stories is showing how his characters were molded by growing up in the oughts and the teens, and therefore how the Jazz Age was actually an expression of them.  Not the other way around.

But it's not an entirely pleasant read, for reasons that I've been running into in the last few Fitzgerald books I've read.  This collection is the plainest display yet of the author's misogyny.  The romantic (in the context of the time, sexual) experimentation, the explorations of other ways of life than the one into which one was born - these things are presented as natural and perhaps even admirable in Basil, but in Josephine they're marks of the corruption at the heart of her character.  And this is done with great craft, so that we must notice the parallels.  For example, each character dabbles in theater.  But whereas for Basil it's a growing experience, one in which he learns how to handle people and how to cultivate the creative side of his personality, for Josephine it's just a walk on the wild side, another sexual fling, and at worst an indulgence of her egotism.

The concept of "emotional bankruptcy" (the title of the last story) is the one that people seem to keep coming back to with these stories.  And it does seem to be an important concept in other works of Fitzgerald's, applicable to both men and women.  But in these stories it only seems to be operative for Josephine, and there I'm not sure it really is emotional bankruptcy.  In that story, Josephine finds a boy who epitomizes everything she's been looking for, catches him, kisses him, and then finds that she feels nothing.  But how does Fitzgerald express that?  "One cannot both spend and have.  The love of her life had come by, and looking in her empty basket, she had found not a flower left for him - not one."

Why can't one both spend and have?  Basil seems to grow through his loves, losses, trials, failures - his expenditures can be seen as investments that bring him dividends.  But Fitzgerald doesn't allow that the same could be true of Josephine.  Her expenditures are purchases of pleasure, made with a finite cache of cash.  She has only so much within her to give to a man, and when it's gone, it's gone, he seems to say.  It doesn't take much reflection, or cynicism, to see emotional bankruptcy in this case as a euphemism for sexual bankruptcy, and Josephine's lament as being one for squandered virginity.  Fitzgerald seems to be suggesting, in other words, that loose girls of the 1910s were destined for unhappiness, because they gave it up too soon.

Disappointing, if that is what he's saying.  Even if he's not fully aware that that's what he's saying.  And I'd imagine it isn't.  He's calling it emotional bankruptcy, after all, trying to develop a concept that hinges more on feeling, on mind and heart, than on body.  But body's there, too, and there's no escaping the double standard applied to what Basil does with his and Josephine does with hers.
Posted by Tanuki at 11:40 AM No comments:

Saw live jazz last Friday night.  "Monterey Jazz Festival On Tour" was the program:  an all-star sextet touring on the name of, and to promote, the Monterey Jazz Festival in its 55th anniversary (celebrate 'em when you can) year.  It was one of those things we went to see because it sounded like a good night out (at the Hult Center), rather than because we really knew what we were getting into.  Since my knowledge of jazz, such as it is, peters out sometime around 1975, I'd only heard of a couple of these players.  And could only associate one of them with a particular record.

The lineup was Dee Dee Bridgewater on vocals, Christian McBride on bass, Lewis Nash on drums, Benny Green on piano, Chris Potter on tenor sax, and Ambrose Akinmusire on trumpet. It was only the second night of the tour, and they'd had a hard travel day, as was mentioned a few times from the stage.  So it could have been a disappointment, and in fact the second number (the first by the whole band) was kind of rocky.  Energetic, but most of the solos didn't seem to really go anywhere - sounded like everybody was warming up.

But that was it.  Everything else was top-notch.  Bridgewater (who was the one I sort of knew) came and went.  She was co-head-billed with the MJF name, at least here in Eugene, probably because she's coming off a Grammy win.  And she did three songs from that album, a Billie Holiday tribute.  Fantastic.  She sounds nothing at all like Holiday, and that worked for her, refusing to allow facile comparisons, forcing us to hear the songs anew.  "God Bless the Child," for example, turned into a loose, rangy blues-gospel barnburner, with Dee Dee alternating between vocalese and soulful growling.  (She's like a sexier, earthier Ella Fitzgerald, with a good dollop of Mavis Staples.)

While she was on stage that was what the band was like:  a standards-ready jass band.  When she left the stage, they turned into something a little more abstract, playing things I confess I didn't recognize but that, compositionally and spiritually, hit the sweet spot of early-'60s Coltraniana.  Restless, moody, but never less than totally tuneful.  Oceanic grooves and empyrean soloing.

It was an education for me.  Christian McBride I'd heard of, but not only did I not know his stuff, I never really, I think, understood how crucial the bassist could be on a jazz stage.  He was clearly, easily, the leader (although Bridgewater called the shots when she was on stage), and a magnificent soloist.  And, on top of that, a charismatic co-front-person in the opening duet with Bridgewater.  But Lewis Nash was the real revelation.  Consummate drumming, every lick in perfect place.  The other three were fine, too, and got better as the night went on, although I suspect Akinmusire was having a bad night - he never quite seemed to jell with the rest, although he had some interesting ideas.


They'd be worth seeing later in the tour, after they have time to work out the few kinks.  But I have to say I enjoyed seeing them early like this.  The obvious moments of indecision - the way the horn players would step off to the side and converse, and then one of them would duck around back to the piano player to ask a question - were instructive reminders that music like this depends on communication.  It's human interaction at its finest, and that means uncertainty and, well, improvisation.  And that's jazz.
Posted by Tanuki at 11:01 PM No comments: