Here's your literary, artistic, interesting, worthwhile erotica in manga form.  Right here.  It's a collection of short stories by Yamamoto Naoki 山本直樹 called Ashita mata denwa suru yo 明日また電話するよ (I'll call you again tomorrow);  came out in 2008, but the stories were originally published between 1995 and 2002, in various venues. 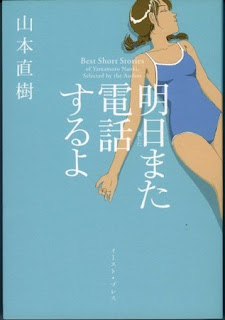 I'm new to Yamamoto, but I always see his stuff in the cool corners of the manga floors of the biggest bookstores - that corner by the elevator in the basement of the Ikebukuro Junkudo - I bought this purely on a flyer.  Sometimes you get lucky.

It's fine stuff.  It's sexy, sure, but also by turns creepy, nostalgic, funny, wistful, hard-boiled, satirical, socially engaged, and even innocent.  There's always two or three things going on alongside the wet stuff;  usually something to make the wet stuff even wetter, and something else to make it bone dry.

The writing's great, and the art rises to the occasion, too.  He's more daring, or is allowed to be freer, than most artists who draw this kind of stuff for mass-market publications in Japan, but what makes his wet stuff work is, of course, not just their cunning lubricity, but his sensitive and sure touch with everything else in the visual plane.  His framing, his composition, his line and shade, are all masterful;  and he experiments.  There's one story in here told entirely in long-focus and wide-frame, same angle, panel after panel, like a movie camera set up and turned on and left;  it's not a trick he came up with (I've seen it in Tezuka, for example), but neither is it a common one, and he uses it well.

It's adult in every sense of the word.
Posted by Tanuki at 5:01 PM No comments: