The Who: A Quick One (While He's Away)

So, another observation that was made the other day in that conversation about the Who is that their real heirs, the sector of rock where you can most see their influence, was prog, and since prog was very quickly discredited, there aren't as many musicians out there sticking up for the Who as you might expect.  This one I stand by.

That is, I don't think the Who's formal ambitions, their artistic aspirations, are necessarily the most satisfying thing about them, but I do think that they constitute the Who's most important legacy to 20th century music.  If you take rock seriously as music (rather than as a vehicle for street poetry or as a manifestation of social phenomena), it's because the Who did it first.

But my favorites are their first two rock operas, neither of which is long enough to merit the name in retrospect, but each of which was billed as such at the time.  The first was "A Quick One (While He's Away)," and it's the more important of the two.  In fact I think it's one of the Who's most impressive songs of any persuasion, and quite the best integrated of their ambitious works.  At nine minutes it's not a second too long, taking the listener on a musical and lyrical journey in which each stage proceeds naturally but inventively from the last.  It's not just a medley of short bits (which is, be honest, what Tommy feels like much of the time), but a truly through-composed piece.  And it rocks.  And it has great jokes ("cello cello cello cello").  And, in true Who fashion, it's either as cheap and trashy ("we have a remedy," heh heh) or as spiritually deep as you want it to be (the ending must be one of the most grace-filled moments in popular song:  "you are forgiven").

The other is "Rael," which, at less than six minutes, really is too short to merit consideration in this category.  But it does move, if very quickly, through a number of movements, and it does tell a story in musical form.  And it does have that bittersweet ending, with the listener knowing the hero has been bitterly betrayed, with his contracted saviors deserting him, and wondering if it matters, if he needs saving, or not.

What's most fun about it, of course, is that it contains a passage that they'd later recycle and expand as "Underture" on Tommy.  It's probably more effective here, but that might just be because, if you come to "Rael" having familiarized yourself with the later work, you can't help but feel a thrill as that noble bassline wells up, as that guitar shakes its regal mane.

Having noted that, of course we have to mention the other musical bit of Tommy that shows up in those last few months before they made that album, which is in the song "Glow Girl."  The song itself doesn't have anything much to do with Tommy, but then the plane goes down and suddenly, "it's a girl, Mrs. Walker, it's a girl."  It gives me goosebumps every time.
Posted by Tanuki at 11:27 PM No comments:

The Who: "Daily Records" and other late masterpieces 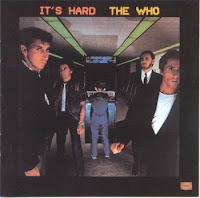 So I was talking to some friends yesterday and said something about the Who that I don't really believe.  I said, apropos of a discussion we'd been having about artists who remain active past their prime, that the Who were one band who really should have hung it up after their classic lineup was no longer viable.  I.e., after Keith Moon bit it.

And I do believe that, I guess, but only with one big honking caveat.  Which is that I think their initial post-Moon run (as distinct from their many and endless later reunions, none of which I have any use for) had enough good and, more importantly, interesting music to make an argument that staying together was the right thing to do.

I'm talking specifically here about the two post-Moon studio albums:  Face Dances and It's Hard.  Which, when taken together with Pete Townshend's two contemporary solo records, Empty Glass and All The Best Cowboys Have Chinese Eyes, make a conceptual and musical whole that I find just as satisfying as any other period in the 'Oo's history.

See, what happened was that Pete was hitting middle age right at the moment when Moon died.  The rise of punk and the death of Moon and the inevitable indignities that your body and mind visit upon you when you approach 40 all combined to give him, on the evidence of the lyrics at least, one hell of a righteous midlife crisis.  And he could still write, to paraphrase a lyric from "You Better You Bet," write a razor line - and, as the song says, Daltrey could still sing it, and Entwistle could still play it.  In other words, he still had most of one of the supplest rock bands in the world at his disposal.  So why not stay together, at least long enough to explore the crashing waves of self-doubt that would inevitably attend upon the decision to stay together?

In short I see the decision to stay together, but hedge his bets by releasing his two best (and most Who-ish) solo albums at the same time, as a decision (perhaps not realized at the time) to end the Who with some of the most intensely ironic gestures of their career.  Yes, the man who'd written "I hope I die before I get old" was now writing about getting old, and he appreciated the irony, thank you very much.  Again, I don't have much use for either Pete's or the erstwhile Who's later stuff, but not because they hung on too long:  I just think somehow that Pete lost it in the mid '80s.  But he still had it up through '82.

And so he gives us beautiful, bittersweet bombs like "Daily Records."  The musical setting alone should have shut up any detractors:  it was the Who at their cod-classical best, bomping and chirping in Gilbert and Sullivan drag.  Tight and silly and uplifting and muscly all at once:  classic Who, this is.  And the lyric:  a guy who still feels like he knows the score trying to cope with the fact that the younger generation, his own kids, think he's old-fashioned.  It's an immutable law of the world that once you pass 35, teenagers are going to think you're an old fogey, and this is true even if you're Pete fucking Townshend:  and you may know that they're just snotty teens and don't know their heads from their asses, but you also know (and they know) that it doesn't matter, because they're young, and so they win.  The end.  And so the best you can do is denounce them cleverly, elegantly, but in the end weakly, in song:  "When you are eleven, the whole world's out to lunch."  Brilliant line.

And he gives us a more somber, introspective take on the same theme (of course part of the brilliant complexity of this last period of Who history is how Pete amps up the already well-established tension between his own lead vocals and Daltrey's, introspection versus extroversion, and stretches it out over whole albums set in dialogue against each other) in "Slit Skirts."  If the speaker in "Daily Records" or "You Better You Bet" was content to assert that he still had the goods, the speaker here is facing up to the dark truth that he doesn't:  "Slit skirts - Jeannie never wears those slit skirts / And I don't ever wear no ripped shirts / Can't pretend that growing older never hurts / Knee pants - Jeannie never wears no knee pants / We have to be so drunk to try a new dance / So afraid of every new romance."

Even the art is great.  Look at the cover of It's Hard.  Now remember that this is the band that built their careers on an album about pinball.  Now catch the look on Pete's face.

Happy New Year.
Posted by Tanuki at 9:44 PM No comments: