The Complete Pacific Jazz Sessions is a 2006 CD reissue of two Gil Evans albums on one disc:  New Bottle Old Wine from 1958 and Great Jazz Standards from 1959.  The skinny is that they were his second and third records as a leader, a capacity he'd been able to assume due to the prominence he'd achieved through his collaborations with Miles Davis, beginning in earnest in 1957. 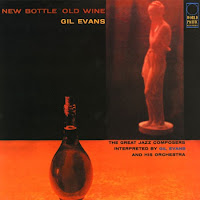 too, is essentially built around one soloist, in this case Cannonball Adderley.  It's Adderley's instrumental voice that dominates the recordings, Adderley's improvisational sensibilities that provide the heart.  It's a fine record, though, don't get me wrong;  Evans's style as an arranger is fully realized at this point, and he's doing fine things with these tunes.  They're carefully chosen to guide the listener through the history of jazz from W.C. Handy and Jelly Roll Morton up to Charlie Parker and Dizzy Gillespie, and as arranged by Evans it all sounds of a piece, utterly modern, and even highbrow.  This is dry-martini music.

Great Jazz Standards opens things up a bit.  Solo duties are spread around among a number of players, notably Steve Lacy, Johnny Coles, and Budd Johnson, on a number of instruments, and Gil's own piano plays a small but key role on a few tracks.  And, it could 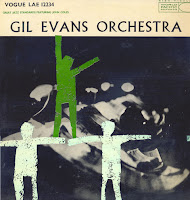 just be me, but the result (and this is strange to say, when Cannonball leaves such a mark on the first record) on the second result is more emotional, more moving.  My favorite track so far is the second record's opener, the Bix Beiderbecke number "Davenport Blues."

Shadows of Treme, sure.  And at this point any trumpeter waking up in Gil Evans's bed is going to be suspected of Miles Davis, but Coles makes his own case pretty quick, achieving a singing, broad, magnanimous tone that Miles just didn't use.  But it's Gil we're here to hear, right?  And he delivers, with a setting that alternates between moaning very reminiscent of '20s hot jazz sonorities and the muted-horn, odd-woodwind murmuring you expect from him.  And it all adds up to a deeply moving, authentically felt blues.  This is the olive in your martini.
Posted by Tanuki at 5:42 PM No comments:

I read the whole Aubrey/Maturin series, basically straight through in a few weeks' time, something like ten years ago.  (Yes, it was the movie that made me aware of them.)  It was one of the most engrossing and enjoyable reading experiences I've had, one of those experiences of utter literary transport that I live for.  But it took, as I say, weeks out of my life:  the books are impossible to put down once you start one, and each one ends, not on a cliffhanger, but on the barest of resolutions of only the most superficial of the plotlines, so that you have to get twenty or thirty pages into the next volume before you feel able to even pause for a while.  So I haven't reread them since.  But now I'm halfway through the series again.

And I'm reading them far too obsessively to blog them individually, or even collectively in a coherent fashion.  Let me make just two observations.

First, the obvious one (given what I've just written).  The twenty completed volumes are, taken together, a masterpiece of popular fiction.  And I use that latter term guardedly:  they're popular fiction in that they inhabit a recognizable genre, and consciously, intentionally offer many of the traditional pleasures of popular fiction, compulsive readability not least among them.  But they're deep beyond any of the censure that may still (but probably doesn't anymore) attach to the term "popular fiction."  The prose is not just beautiful but challenging;  the characterizations are as subtle and complete as anything I've encountered in literature;  and the themes are as thoughtful and thought-provoking as you could ask for.

To wit (and this is my second observation):  I think the books' big theme is Tories vs. Whigs.  Not in the narrow sense of the two parties that dominated British parliamentary politics at the time of the Napoleonic Wars:  certainly those parties are mentioned by name, and some of the issues over which they argued are brought in.  But this is done with O'Brian's characteristic subtlety, so that for a reader like me who's not an expert in the period it's easy to miss them - an occasional mention of rotten boroughs suggests a great deal, but doesn't spell much out.

Because what O'Brian's more interested in is Toryism and Whiggishness as temperaments, as fundamental approaches to life.  Conservative vs. liberal, to use today's terms.  Broadly speaking he gives us Jack Aubrey of the Royal Navy as an example of the Tory approach - Aubrey embodies the Navy's adherence to tradition, to tried-and-true ways, and its abhorrence of innovation (the word itself is used as a term of opprobrium on several occasions in the books).  Stephen Maturin counterbalances him as an example of Whig values, I suppose - being Irish-Catalan, he's never described in terms of English politics, but he embraces innovation, scientific theory, progress on all fronts.

What lends these broad tensions resonance is the series' Napoleonic Wars setting.  Maturin and many other characters who find themselves now fighting Napoleon privately find the values asserted by the French Revolution appealing:  Maturin was a revolutionary in his younger days, and opposes Napoleon not because he's French, and not because he threatens England, but because he betrayed the Revolution's ideals.  The books therefore become an ongoing, unresolvable, but strenuously argued debate over questions of authority and how it should be constituted and exercised.

What makes the books so satisfying, however, is O'Brian's penchant for complicating every character he sketches.  We become accustomed to the idea of Aubrey as the conservative naval officer who learned to sail by instinct and is content to do things the way they've always been done because they've always been done that way - because tradition is its own authority - but then in middle age he suddenly develops a passion for mathematics, for understanding the theoretical basis for his sailing instincts, and in fact we realize that he spends just as much time bucking tradition as buckling under to it.  He thinks of himself as a Tory but in many ways he's a Whig.  Meanwhile Maturin is a vocal opponent of Naval conservatism, ridiculing all its old ways with a variable degree of affection, but in his own profession as physician he's an unquestioning adherent of bloodletting as a virtual panacea;  on a less comic note, we're often reminded that, despite his revolutionary youth, he has an aristocratic background and is no more a friend to democracy (another word always used derogatorily in the books) than is Aubrey.

What O'Brian is giving us in these books, then, is characters caught between fundamental human impulses toward stasis on the one hand and change on the other, at a moment when each impulse has been given clear historical manifestation, when the positions have become polarized to the point of bloodshed, but characters who themselves refuse to become polarized, because they themselves are not comfortable at either pole.  They are, actually, perfectly Cold War books, and I think I love them for a lot of the same reasons that I love Le Carré's George Smiley books.
Posted by Tanuki at 9:13 PM No comments: