Finally I'm managing to push a little farther backward in my A-Prize project.  Chūin no hana 中陰の花 (Flowers of Limbo), by Gen'yū Sōkyū 玄侑宗久, won the 125th Prize, for early 2001. 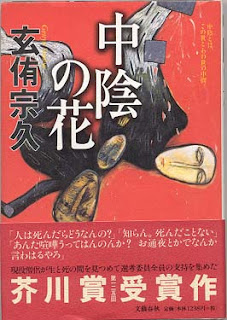 The chūin of the title refers to the first 49 days after death, a period in which the deceased is thought, in traditional Japanese Buddhism, to be hovering in a nether-state between this life and reincarnation.  "Limbo" is no doubt too Westernizing a translation of the concept, but it gets the job done.

The author is an ordained priest of the Rinzai sect of Zen Buddhism.  The story that won the prize reads very much like autobiography, although it's written in the third person.  The main character, a Rinzai priest called Sokudō, officiates at a temple in a small town in northeastern Japan;  this seems to be drawing on Sōkyū's own experiences at a temple in Fukushima.

The main conflict in the story is between Sokudō's highly intellectualized Zen understanding of the world and his flock's desire for a more miracle-oriented religious experience.  Sokudō was raised in this small town to inherit this temple, but he spent a lot of time with a neighbor who happened to be a diviner with a large local following.  Now this diviner has died, and Sokudō discovers that among her patrons was his own wife, who had consulted the diviner after miscarrying Sokudō's child some years before.  Sokudō, we learn, had never conducted any ceremonies on behalf of the fetus - the thought had never occurred to him - but now he realizes that his wife has been troubled for years by worry about the fetus, and the death of the diviner brings these feelings to the surface.

A conversation early in the story hints at all this.  His wife asks him what happens after death, and the priest's response is, essentially, how should I know?  Somewhat taken aback, his wife points out that, well, you're a priest - shouldn't you have an answer to this kind of question?  He responds that he tells his various parishioners what they want to hear - that is, he gives them an answer geared to their level of understanding, something that will give them peace.  His own understanding of Buddhism and reincarnation is essentially a scientific one - he takes the sutras as metaphors for what contemporary science describes in terms of matter and energy coming together in the form of human bodies and then breaking apart again to take other forms.

This doesn't satisfy his wife, but she doesn't press it.  However, later she asks her husband to perform ceremonies for the fetus, along with the diviner.  In preparation, she makes a great net of twisted colored paper (using the wrapping that had come on gifts to the temple over the years).  At the ceremony, they hang this net over the altar - and as he finishes the sutra-chanting, the net sways and glitters in otherwise motionless dark air, looking like flowers in the heavens (or in limbo).  The wife takes this as a sign that the fetus has been properly delivered from limbo, or otherwise comforted, although Sokudō himself isn't quite sure.

There are subplots to reinforce the theme of priestly skepticism versus parishioner credulity.  In this post-Om period, Sokudō is particularly concerned about signs that some of his parishioners are taking up with shady new religious movements.  The diviner herself was harmless, but others may not be.  In the process of investigating this, he hears claims of spiritual manifestations.  He doubts them, of course - he experienced such things himself during his Zen training, but had been instructed to disregard them as distractions from true enlightenment.

So the tension here has, actually, two layers.  On one layer, it's the modern tension between the contemporary science-based materialist understanding of the world and a "superstitious" view of religion;  this layer exploits the irony of the priest, as the most educated member of the community, actually standing for a skeptical point of view.  But on another layer it's a tension that's always been at work between Zen and other sects of Japanese Buddhism - Japanese Zen poets were exploring this theme in the 15th century (David Pollack translates some excellent examples).

Thematically, laid out like this, it's a pretty interesting story.  As a read, it was a little less satisfying.  The plot is elliptical and meandering, which isn't a problem per se (it's rather standard), but that shifts the focus to the language, which isn't quite all it could be.  Some images are quite vividly realized, but often the author's prose feels unnecessarily convoluted - not Ōe-level thorny, but a little hard to follow, and without the sense you get in Ōe of the difficulty being compensated for by precision.

The bonus story, Asagao no oto 朝顔の音 (The Sound of Morning-Glories), deals with some of the same themes from a different perspective.  The protagonist is a thirtyish single woman in a small town in the Northeast, working in a convenience store.  Uneducated, all alone in the world.  When she was young she was raped, twice, and one of the rapes resulted in a pregnancy.  She lost the child, and has no memory of the circumstances - there was some suggestion that perhaps she killed it, but she honestly doesn't remember.  Could have been stillborn.

Now, years later, she's tentatively opening up to a new relationship with a guy she met at work.  Encouraged by this new plateau in her life, she visits a diviner to get in touch with the spirit of her dead child.  She contacts something, and some memories come back - but she can't trust either.  Part of her, of course, doesn't want to know what she might have done.

The title refers to some morning glory seeds her new boyfriend gives her - supposedly from a strain of morning glories that has been unchanged from the Heian period.  She plants them below her apartment window, and as they sprout and bloom she begins to perceive them as a metaphor for her own revival. She even hears, or thinks she hears, a heavenly hum from them.  Near the end, after she has begun to suspect her own guilt, she tears them all out of the ground.

Not a bad story.  The prose has the same problems as the other, but it's still a searching exploration of popular religious feeling, guilt and hope, on the fringes of Japanese society.

Not your typical A-Prize bait, this.
Posted by Tanuki at 4:47 PM 3 comments: 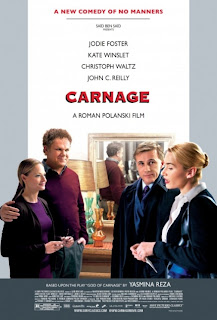 This was a huge disappointment.  Not because I had heard good things about the play on which it was based - to be honest, I had never heard of the play - but because Polanski's previous film had been one of his best, and the last film he'd made of a play was also one of his best.

This one was not.  But I don't blame it on Polanski.  The things that we're safe in assuming he had control over - the filming, editing, mise-en-scene, and acting to a degree - were fine.  Expert, even.  But unobtrusive - there were no compositions that distracted from the dialogue, or even enriched the dialogue in a way that made me sit up and take notice.  The direction served the script.

That's where the problem was, and for that I think we can blame the playwright.  Although, since I know nothing about the play, I suppose it's possible that some of the flaws entered the script in the filming process.  What flaws do I mean?

Well, jeez, what have you got?  I mean, everything about it blew (to use a bit of film-scholar jargon - go ahead, you can look it up).  As a satire of the childrearing manners of wealthy white New Yorkers, it was less incisive than any one of about two dozen Law & Order episodes I've seen.  Come to think of it, when it tried to show how these parents' attitudes toward their children's behavior mirrored their expectations for adult behavior, the script was still sub-Law & Order.  And when these characters stopped in the middle of their arguments to pontificate about the nature of humanity and the conditions of our existence, well, let's just say I've been hit over the head with actual hammers that seemed subtler.

Mrs. Sgt. T suggests that Polanski should still be held responsible for this excrescence upon his ouevre - he chose to make the damn film, after all.  I can't really argue with her.
Posted by Tanuki at 8:02 PM No comments: