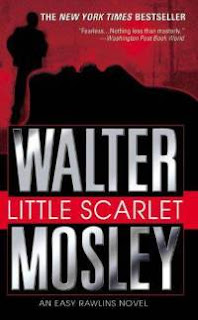 This one takes place as the 1965 Watts riots are winding down, and of course Easy's in the thick of them. His office - which he'd just obtained at the end of the last book - is nearly burned out from under him, and everywhere he goes he sees the traces of the violence, or feels them.

And it's how he feels about this, how he experiences it, that's so interesting about this book.  The case itself is suspenseful enough...and now I realize how little I've said about the actual cases Easy Rawlins solves.  Which is not because they're not enjoyable.  They are.  There's suspense, there's atmosphere, there's action, there's memorable character after memorable character - a panoply of black Los Angeleno life that never ceases to amaze in its variety and specificity.  But it's true that the real joy of the series for me isn't in the mysteries but in the worldview that those mysteries are there to help develop.  At their best, the Easy Rawlins books display a careful synergy between story and theme, where the details of the cases serve to advance or embody the larger ideas at work.

This is one of the best, and this case does that.  Easy is enlisted by the (white) LA police force to catch the white man who they think killed a black woman in Watts during the riots.  They put Easy on the case rather than sending in police detectives because they want to keep the whole crime covered up for fear that it might reignite the riots.  So Easy's investigative work brings him face to face with the causes and effects of the riots, and the fact that the white cops are asking him to track down a white killer of a black woman puts him at the heart of the race relations that the riots were all about.  And if you suspect, even from this meager description, that there's a cruel irony waiting at the end of this investigation, you'd be right.

Because for Easy, the central truth of the riots is that they turn the normal order upside down.  They contained violence, and Easy already suspects that materially they're not going to make things any better for the black citizens of Watts, but they represent for him, in the moment, the forceful claiming of a space for black self-expression.  Easy didn't riot - he says he sat at home "holding myself in check."  But now that he has to go out and function in the world created by the riots he finds that he's able to - he has to - go places he's never been able to go before, say things he's never said before to people he's never said them to before.  It's a brave new world, full of new perils but also promise.  And that's not something you'd get from most noirs.
Posted by Tanuki at 10:12 PM No comments: