The Who: "Sea And Sand" and "Drowned" 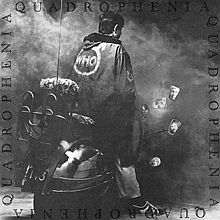 So here's my problem with Quadrophenia.  It's exhausting to listen to, and not in a good way.

What do I mean by that?  I mean that Pete's early rock-opera writing had the virtues of the best pop music, in addition to all its other sterling qualities.  Townshend was always the British Invasion rocker with the deepest appreciation for the conceptual value of a good pop record - the deepest sense that the brevity, the directness, that the formula demanded and encouraged could be the royal road to great art.  And Tommy, for all its length and complexity, all its high-art pretensions, preserved that brevity and directness.  Each separate track is short and punchy.  None overstay their welcome:  they all say what they have to say clearly and concisely and then leave.  The result is a program that inexorably leads the listener on from one track to the next, from the beginning of the story right up to the brilliant end.  The last notes of one track always leave you hungry for more, making you yearn for the first notes of the next.  It's one way in which Tommy is great art.

Another way of saying this is that Tommy is music of challenging and rewarding complexity, but that this complexity resides in the relationship of the parts to each other and in the overall concept of the work, not in the individual tracks, most of which are fairly straightforward pop songs.

With the Lifehouse project, however, Pete changed the way he wrote.  He started bringing that complexity into each separate song, so that things like "Baba O'Riley" or "Song Is Over" move through several parts.  They're not typical pop songs.  They're mini-rock-operas, if you will - rather like "Rael," actually.  "Bargain" is my favorite example - it's such a ballsy rocker that you forget how many different moods it encompasses, but it's really a rather complicated song.  A far cry from "Pinball Wizard."

Of course, the Lifehouse project was never completely realized, but was boiled down to Who's Next instead.  And I've always thought that was a good thing.  Who's Next was an attempt to construct, out of the shards of the larger project, a more or less normal rock album, and it succeeds in spades:  the more convoluted material is balanced out by straightforward things like "Going Mobile" and "My Wife," allowing everything to shine.  Start putting the discarded tracks in there - many of which are pretty convoluted - and it begins to feel crowded.  I know:  like most Who fans, I've put together two or three versions of my ideal Lifehouse, and none of them are as effective as Who's Next.

What they sound like, in fact, is Quadrophenia.  A lot of really complex songs all jostling for attention.  The Side Three sequence of "Sea And Sand" and "Drowned" is a perfect example.  Each on its own is a magnificent number, full of creative permutations and orchestrations.  But each is a full-course meal, or an opera in its own right, including everything from overture to finale.  Finish one and you don't want another, not right away.  But Quadrophenia is full of them.  Which is why I can't listen to that record beginning to end.  It's full of brilliant music, but as a program it's too much.
Posted by Tanuki at 11:39 PM No comments:

We were in the mood for a movie and this was playing at the Bijou, so we saw it:  House of Pleasures is the title it was playing under here (L'Apollonide: Souvenirs de la maison close is the original title).

Mrs. Sgt. T and I, discussing it on the way home, decided that it was about 60% a movie with serious artistic aims, and 40% the kind of softcore Europorn that an adolescent boy in the '80s would have stayed up late to try to catch on Cinemax.

The 40% I won't bore you with - we're old enough and mature enough to take that for what it's worth, which isn't quite nothing.  The 60% is worth mentioning:  beautiful sets and art direction, fine acting and writing, and some quite effective formal experimentation.  Reviews all mention the use of late 20th century pop in the soundtrack, but it's much less intrusive here than in, say, a Baz Luhrmann film.  They also all mention the splitscreen photography - sometimes the screen is divided into quadrants - but what they don't mention is that this doesn't feel gimmicky at all, but rather quite effective in an almost documentary way, telescoping a lot of information about how this kind of business is run into a short time.

The Tanuki and his Mrs. can't be quite objective about this film, however, because both of us are specialists in traditional Japanese culture, with a particular interest in Edo pleasure district culture.  And it was astonishing how familiar the world of l'Apollonide felt to the world of the Yoshiwara.  Same kinds of financial arrangements between the girls and their owners, same kind of decorative and architectural strategies employed to make the interior of the brothel feel like a fantasy world, some of the same narrative tropes used to explore the world.  Not all:  the kind of jealousy that drives Sakuran, for instance, isn't really part of this film.

Anyway, I know nothing at all about turn-of-the-century French brothel culture, so I have no idea if Bonello's film is true to it, or if he's adopting geisha stereotypes (he cleverly works in geisha imagery in one scene, but it's authentic enough to the great days of japonisme that I'm not sure if it means he's drawing a parallel, or just that his characters are).  But it worked.  And the fact that we've spent years working through our issues with this kind of milieu probably explains how easy it was for us to connect with the 60%, whereas many viewers might see only the 40%.
Posted by Tanuki at 11:18 PM No comments: