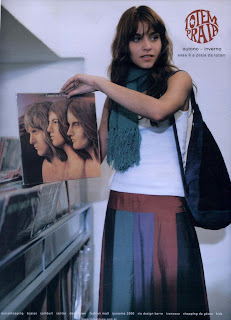 Got in an Emerson, Lake & Palmer mood for the first time in a couple of decades, really. Was really struck this time by "The Endless Enigma" from their 1972 album Trilogy. Here's pt. 1, the middle fugue, and pt. 2.

Yeah, it's prog at its pompousest. I didn't used to mind that, when I was a teenage progger. Now I ought to know better, I suppose, but I don't. Because what struck me this time around was how very, very rock'n'roll this kind of pomp is.

ELP knew excess. "The Endless Enigma" is full of it. Excessive musicianship (if you like hearing good players play good,* you probably dig all that keyboard/bass/drums interplay: ELP were a jazz trio on acid). Excessive attitude ("I'm tired of hypocrite freaks / With tongues in their cheeks / Turning their eyes as they speak / They make me sick and tired" - does it get any punker than that?). Excessive atmosphere (that X-Files-ish opening, that "Great Gates Of Kiev" closing).

As they used to say: too much, man.

(*and if you don't like hearing good players play good, why are you here?)
Posted by Tanuki at 11:11 PM No comments:

Ainulindalë and Valaquenta, fragmentation and completeness

So I'm reading The Silmarillion now, for the first time since I was in junior high; this is the one I've never gone back to, no matter how many times I read LOTR. And immediately I find it rewarding, because the first two sections, the "Ainulindalë" and the "Valaquenta," are so different.

One of the tensions that drives LOTR to such aesthetic heights is that between fragmentation and completeness. Middle-earth (don't forget the hyphen) is a complete creation, with more language, history, mythology, culture, and geography than most of us know about the world we live in. Its completeness is part of its charm: at some point or another most readers, I think, are struck by the thought that they could just crawl into Middle-earth and live there (not to mention the desire we all feel to do so).

And yet for the most part this completeness is achieved - rather, I should say, it's communicated to the reader - by means of fragmentariness. LOTR never sets out the complete mythology of the elves to its readers; we get bits and pieces here and there in songs and poems and allusions by different characters, and these are so carefully arrayed, and so convincingly placed into the mouths of the characters, that they create the sense that they're parts of a larger and complete whole. Same with the languages, same with the histories of Gondor, etc. I'm convinced that it's this fragmentation - Tolkien's way of delivering to the reader shards of his vision, tucked into the pockets of his story-cloak - that makes his fictional world succeed.

The Appendices set a lot of this stuff out in more complete fashion, particularly the history of the kingdoms of men; but even if you read the Appendices (and I don't know how many readers do), by the time you read them, you've already bought into the reality of the world. Nobody starts with the Appendices. And, truth be told, the Appendices don't give you everything, not by a long shot. They mostly flesh out things that you could almost have deduced from the narrative.

I'm no expert on Romanticism with that capital R, but it strikes me that this fragmentation is part of Tolkien's inheritance from Romanticism. It's part and parcel of his Ossian-like pose, delivering survivals from a vanished antiquity. But as I say, I think it's narrative genius; and I think Tolkien on some level knew this, because he wrote Lord of the Rings rather than insist single-mindedly on completing The Silmarillion.

"Ainulindalë" and "Valaquenta" are what LOTR isn't, systematic and complete expositions of the mythology of the Elves. They're the Creation Story, the War in Heaven, the catalog of angels. And not only are they deadly dull reading (beautiful, though, both in conception and execution), but they feel a good deal less real than LOTR. When we encounter this stuff within the narrative of LOTR, we're experiencing it as the hobbits do, as hints of a vaster truth. When its laid before us like this, it looks, well, made-up.

But what a making-up. Suddenly Tolkien's project no longer feels Romantic to me, but Modernist. It's monumental: it's no longer the illusion of completeness, but the completeness itself. It's the fictional equivalent of, say, a Brancusi (how right Peter Jackson was to bring Brancusian elements into his representation of Gondorian art): Ideal, seamless, polished and smooth, entirely 20th century in its manner of evoking classical canons of beauty.

Modernism isn't something you tend to associate with Tolkien, who was at such pains to preserve, and to show himself preserving, pre-industrial ideals. I'm not up on the critical discourse on Tolkien, but it does begin to seem to me that if we don't think of him as a Modernist, we're missing something.
Posted by Tanuki at 10:56 AM 1 comment:

We just moved, the Tanuki family did, and while we're waiting for our stuff to arrive we're sort of catching up on some movies we missed. M. Night Shyamalan's The Happening is one of them.

This is it: I'm now officially getting off the bus with this guy. I'm stubborn enough that I've stuck with him over his last three, very uneven, films on the strength of his first two. I loved Sixth Sense as much as anybody, really liked Unbreakable, had problems with Signs but was generally on board, was maybe the only person I knew besides the Mrs. who liked The Village, and don't really remember Lady in the Water. Mrs. S.T. says I hated it.

I think everybody else gave up on him with The Village; like I say, I'm stubborn. If an artist gives me pleasure I'll cut him or her a lot of slack. But with The Happening I ran out of rope (does that even rise to the level of a mixed metaphor?).

First of all, it has some of the stupidest dialogue I've ever heard in a movie - poor Marky Mark, so much the best thing about The Departed, tries desperately to believe in what he's saying, but obviously fails. John Leguizamo just looks like he's trying to get it over with. Zooey Deschanel just looks. None of the subplots work (who cares if she's being stalked? who cares if she and Marky Mark stay together?).

But what's worst is that there's absolutely no suspense. Say what you will about Shyamalan, he can usually create suspense. But here, once you figure out that The Plants Did It, you pretty much know how it has to end. That means that nothing that happens in the last hour of the movie means anything. All that business about the paranoid people shooting from the windows, and the Luddite lady with her Underground Railroad house - none of it matters. It's just filler, to make a feature-length film out of what would have been an okay half-hour Twilight Zone episode. And it feels like filler. Annoying.

Even Shyamalan's cameo (as Zooey Deschanel's off-screen stalker) is irritating. Too cute for its own good.
Posted by Tanuki at 11:13 PM 2 comments:

I'm one of those who reads the Appendices every time I read Lord of the Rings. Partly it's because of all the background info they contain on the fictional world: the fictional world, fully fleshed out, is what I read this for, as much as the story itself.

But partly I read the Appendices because they complete the story. They have extra little bits of key narrative tucked in here and there, such as the full tale of Aragorn and Arwen's love, and further info about what the Travellers did after coming back to the Shire. But more than that, the Appendices complete the novel, in a way, by allowing the reader to immerse himself or herself fully in Middle-Earth. "The Shire has been saved," Frodo says, "but not for me." But it is saved for the reader, and in the Appendices, we get it all.

One thing that hits you as you hit the hard road of the Appendices is the framing device. After a thousand pages of Tolkien's narrative you're lucky if you can remember that he ended the Prologue with that bewildering bit about the Red Book, and the Thain's Book, and the copy in Minas Tirith, and whatnot. Fictional historiography: dry stuff.

But then you read the Appendices, and they refer you back to the Prologue, and furthermore long sections of the Appendices' account of Numenor, Arnor, Gondor, etc., are given as direct quotations from something, and you realize, oh yeah, they're from the Red Book.

Then it hits you. The Lord of the Rings itself is meant - asks you to read it as - more or less Frodo's account, reworked in Rivendell and the Shire. I mean, sure, there's that scene at the end of the story proper where Frodo gives Sam the manuscript (Peter Jackson, admirably, retained it). But for me at least, it's not until I cross over into the Appendices and those significant quotation marks that I realize that everything that's gone before is meant to be read as a paraphrase of what's supposedly in this Red Book.

And that suddenly explains what is for me one of the most conspicuous features of The Two Towers and Return of the King. This is that Tolkien employs two very different prose styles for his narration. The chapters dealing with Frodo and Sam are written in the same style as Fellowship: detailed, novelistic narration, with lots of dialogue that sounds like authentic speech. Lots of description of place and feeling. The chapters in which Frodo and Sam don't appear - i.e., the sections in Rohan and Minas Tirith - are told in a more elevated, archaic, and in fact storybook style. Description of setting is often minimal, and conversations are rendered in a fair and graceful speech that you can't imagine anyone actually using.

I used to think this was a sign of two things that became true as the book wore on: one, maybe Tolkien was getting tired and rushed; two, as the deeds became greater, he decided to treat them in more of a legendary fashion. Because that's what it feels like: like you're listening to a storyteller. As opposed to the Frodo sections, which feel like you're reading a book.

But now - I don't know if this is what Tolkien intended, but I do think it fits - it seems to me that this stylistic divergence fits the frame device. The Rohan and Minas Tirith sections are things that Frodo didn't witness firsthand, things he learned about only later, through people telling him tales. It's only appropriate that the narration become more storybook-like here.

The proof, I think, is that the tone becomes most campfire-taleteller-like in scenes in which neither Merry nor Pippin are present. Exhibit A, I would say, is the first half of the chapter called "The Steward and the King." This is the part that tells of Faramir and Eowyn falling in love in the Houses of Healing. The tone here is perhaps the most elevated - courtly is the right word - of any section; you could almost be reading Malory. In terms of narrative, the tone actually weakens it, I think, because you can't really believe it as a love story in a novel, not the way you can believe, say, the courtship (deftly suggested through a minimum of details) of Sam and Rosie.