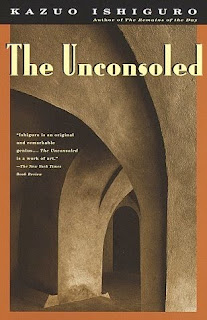 I just finished Kazuo Ishiguro's fourth novel, The Unconsoled (1995). I started it just after finishing Oliver Twist - that's how long I've been struggling to get through it. This is a bad, bad book.

I'm not absolutely positive I get everything he's trying to do - I'll admit that right up front. It seems to me that he's trying to craft some sort of existentialist fable in a surrealistic mode, using dream logic and absurdist machinery. The Kafka homage is clear: the unnamed Central European setting, the hints of totalitarianism, the characters' tendency to babble.

But whereas in Kafka this sort of thing creates unbearable tension broken only by wicked, knowing humor, here everything falls flat. What should be funny is just maddening. What should be resonant is just trivial. I kept remembering Wyndham Lewis's famous dis of Gertrude Stein: "Gertrude Stein’s prose-song is a cold black suet-pudding. We can represent it as a cold suet-roll of fabulously reptilian length. Cut it at any point, it is the same thing; the same heavy, sticky, opaque mass all through and all along." That's this book: thick, slow, dreary, boring, and endless.

That's all I have to say about the book, really. It didn't do it for me. But you may wish to read reviews by people who liked the book. This reviewer posits a reading that might cause the book to make a certain amount of sense; I didn't see much internal evidence to support the reading, and even if it's true, it doesn't make the book any less atrociously boring, but it's a nice try. This reviewer gushes. Not much one can say in response. Glad he liked it.
Posted by Tanuki at 11:22 PM No comments: 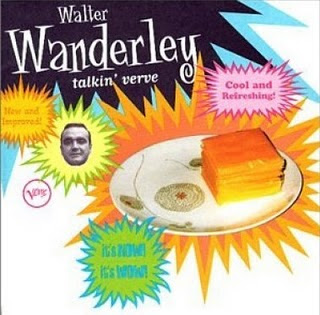 Walter Wanderley gets no respect. First of all there's the indignity that nobody's ever heard of him. Then there's the fact that he has a nerdy name (so does the Tanuki: this is the face of commiseration), and looked like he should have been managing the men's wear department at a small department store in the mid-Atlantic region. He was a bossa nova star in Brazil who came, like many others, to the US to capitalize on the craze here, but he arrived a little too late to really enjoy it. And his instrument - the organ - doesn't immediately spring to mind when you think of bossa nova. As the liner notes, by John Corbett again, say, the combination conjures up images of "demented Wurlitzer salesmen and a frustrated roller-rink operator or two."

That's how you know Walter Wanderley gets no respect: in the late '90s the guy is starting to get enough attention from club-music outfits and whatnot that his label, Verve, decides to devote a volume of the Talkin' Verve series to him (1998). But they're embarrassed enough about it to feel like they have to present him ironically - look at that stack of sliced American sandwich cheese on that cover. "Cool and refreshing!" Yeah? If I were to attempt to decode this, to recreate the thinking behind it, I might come up with something like this: "Yeah, Creed Taylor signed this guy, but the label never gave him the big push, and, well, I don't know jazz, but isn't Jimmy Smith the jazz organ player, and we already have him, but then again the cool kids seem to be interested in this guy for some reason, but you know, they're kids, it's probably just a goof, but still, maybe there's a buck to be made there, but only if we let them know we're in on the joke - I know, let's put cheese on the cover. 'Cause, you know, he's kind of cheesy, but we know that, so it's okay."

Does that make it okay? I dunno. All I know is that Corbett spends his whole essay trying to hit the sweet spot of youthful irony while simultaneously letting any serious jazz fans who might be reading know that he's not fooled, he doesn't take Wanderley seriously.

But I do. And I don't know jazz, but I know a distinctive sound, a complex emotional approach, a sharp sense of syncopation, a crack rhythm section, and a vervacious take on melody when I hear it. And that's what I hear here, and I would have welcomed an attempt to teach me a little more about where that comes from and what it means. While I'm snapping my fingers and smiling a goofy smile because it's all so nerdy and unexpectedly fun.

I keep harping on the liner notes to this series. It's not that I'm looking to be told what to like and why: I trust my own taste. But I don't trust my own knowledge: or rather, I trust that it's limited, and can be improved, particularly in the area of jazz and contingent musics, and in fact I welcome instruction there.

...You'd never mistake Wanderley for Jimmy Smith. Smith's organ purrs like a cat. Wanderley's sound is more twisted than that. I don't know what he did to his rig, but each note punches and then quickly dissipates into a haze of colored light, like a puff of dry ice. And it's true, the cumbersome mechanical nature of the organ makes it an unlikely bossa instrument - it kind of lumbers where the acoustic guitar can skip and dance - but Wanderley makes that work for him. He plays with determined agility, and a wholly fresh sense of the rhythmic role of keyboard chords, and he makes that dry ice punch sound really...funky is the only word. Like, heaviness plus tricky rhythmic exactitude equals something Fred Wesley might have appreciated.

There's something here. Check him out with Astrud on "Tristeza." Kicking back on "Music To Watch Girls By." Twizzling the perfect melancholy sunset sailboat bossa with Luiz Henrique on "Blue Island."

I need a new word. Kitsch doesn't cut it: it implies that it's not worth liking, no matter that you like it. Whereas I tend to think that if you like something, genuinely like it, that's kind of a clue that there's something there worth liking. Follow that, and it might lead you to interesting places.
Posted by Tanuki at 11:13 PM No comments: