This, too, is less horror novel than meditation on questions of character, it turns out.  Not that it doesn't have its creepy moments - the evocation of a seedy county-fair midway at closing time is, well, just like I remember it from childhood.

But really what this book is, is a fictional working-out of every high-school kid's favorite alternate-universe scenario or ethical poser:  if you could go back in time to one of Hitler's rallies, knowing what you know now, would you or could you kill him?

And feel.  Because, yeah, the real horror in this, if there's horror, is not in the things Johnny sees, but in the responsibilities they give him.  It's a story in which we're asked, essentially, to root for and to pity a political assassin.  A guy who knows what history is going to say about him, and who cares a lot about that, but who feels like he has to do it anyway.  What's key is how King tips the scales in Johnny's favor (if that's the word).  King could have kept it ambiguous - a lot of writers would have challenged us to trust Johnny's word, to decide for ourselves whether or not he's right.  But we know the objective truth about the things Johnny knows subjectively, and we know he's right.  In other words, King is choosing to locate the suspense, and thus the horror, not in the question of whether or not Johnny's visions are real, but in what he's going to do about them.  The moral question. 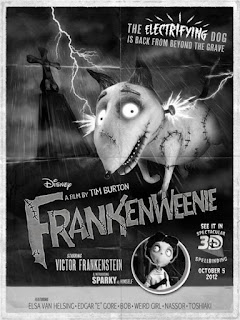 I suspect the proper thing to do would be to hate this big-budget, middle-aged, full-length remake of a once-so-underground-it-was-almost-punk short.  But hating it wouldn't be fun.  So we love it.

Plus, it's stop-motion, and Tim Burton is the redeeming genius of stop-motion animation.  And this, complete with tres meta stopmotion-within-a-stopmotion (not to mention live-action within the stopmotion), is a work of genius.  And he had the balls to make it black and white, and make the mouse go along with it.

This is good Tim Burton:  the Tim Burton that, unlike the one that made Alice and Planet of the Apes, follows through on the true moral anarchy of his vision.  I was wondering, as it drew to an end, if he would relent this time and decide that young Victor needed to learn a Life Lesson about accepting death - but no way.  Frankenweenie is all about saying that Shelley (whether as Gamera or not) had it wrong.  When humans learn how to bring back the dead, we will, and we'll find we're pretty damn happy about it after all.  And maybe it won't be wrong.  ...Maybe.  I mean, I don't deny the moral power of Shelley's book.  I just like the way this film pokes it in the eye, too.

About that Gamera - you'll know what I mean when you see it, and I don't want to spoil it.  Let me just say it was one of my favorite things about this movie.  Burton set the joke up a good hour ahead of time, and in a fairly tasteless way - but when he springs it, all is forgiven.  (And there's something pretty emblematic of Burton's method in how he turns Mary W. into that.)

And the Sea Monkeys.  I'm old enough to remember ads for them in the back of comics.

And Goodbye Kitty.
Posted by Tanuki at 12:14 AM No comments: