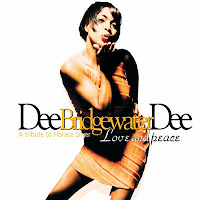 A totally different bag than the Billie Holiday album, although this one too is a tribute.  For one thing, this is from Bridgewater's French period, and is recorded with mostly French musicians, in France, for a French label (but sold in the States by Verve).  It's not at all acid jazz, but it has a bit of that delirious European mid-'90s hipness that United Future Organization, US3, and others had around that time.  Dig her blowing kisses on the cover:  it's a very flirtatious record.

For another, Bridgewater has different relationship with Silver than with Holiday.  Acc. to the wikipedia, her husband sang with Silver.  And Silver turns around and guests on two tracks on this record (Jimmy Smith does the same).  It's a much less reverent record, much less of a recital and much more of a jam.

It's also different that in this case she's not celebrating a vocalist, and therefore seeing what she can do differently, but singing songs written by an instrumentalist and primarily (exclusively?) known as instrumentals.  This gives her a lot more room to play, and in some ways maybe a little less impetus to present songs;  here she usually sounds like one of the band, and scats so much that you might even think her a horn.  And in spite of Silver's presence, she pretty much owns these songs, for the duration of this record at least.

Dig "Song For My Father," which she steals not only from Silver himself (that's him on piano) but from Messrs. Becker and Fagen.  Or "Filthy McNasty."  Her solo here is just pure champagne.
Posted by Tanuki at 11:52 PM No comments: 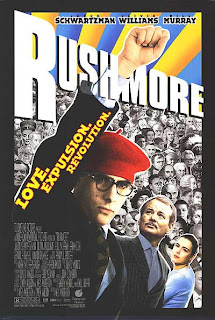 I once conceived the thesis that Wes Anderson's films were all secret adaptations of Salinger books.  I was thinking mainly of the Glass stories, but then again I always expected that when I finally got around to seeing Rushmore it would be Catcher in the Rye, in all but name.

Late to the party again, I finally saw it, and of course it's not that.  Or at least, not just that.  There is a definite awareness, I think, of Holden Caulfield in Anderson's creation, but the divergences are as instructive as the convergences.

Like, the way the film begins, with Max yes-indeeding Herman's denunciation of the rich:  there's some Caulfield in there.  Until we realize that, unlike Holden, Max isn't a rich kid rebelling against the stultifying pressure of his own privilege, but a working-class kid who really has a right to feel that way.

I hesitate to proclaim that anything is something new;  I'm enough of a premodernist to know how rarely that claim is true.  But the particular dynamic that Anderson is delineating here feels fresh to me, feels like something unique.  That dynamic, as I see it, is this:  Max has had a lifelong fixation on the life of the private-school elite.  But not in any Talented Mr. Ripley sense - not because he's obsessed with wealth or privilege.  Not in so many words.  Rather, it's because all the absurdities of it fit him, spiritually, perfectly.  And he comes to feel he has a right to it simply because he can appreciate it, enjoy it, all so much more deeply than those who come by it naturally.

It's not an exposé of a poseur.  It's not an excoriation of a climber.  What else is striking about it is how benign it is - for the most part.  The film has a satisfying undercurrent of unease, because we see that Max is capable of going too far in his obsession with Miss Cross, and we're always afraid he'll go far too far.  But in the end he's capable of self-reflection;  and more than that, he's capable of adjusting to being cast out of his own particular private-school Eden.  At the end we realize he'll probably be okay in public school.  The kid's alright.
Posted by Tanuki at 9:51 PM No comments: