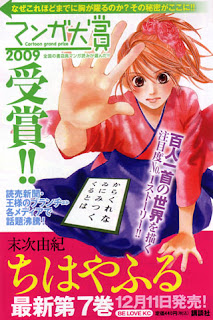 Another one that I'm the last in the neighborhood to read.  Mrs. Sgt. T got hooked on this, and before I could get around to reading it, our copies of it started making the rounds of our friends.  I finally got my greasy littles on it a couple of weeks ago.

The title is Chihayafuru ちはやふる, which pretty much defines the concept of untranslatable title.  It's a "pillow-word," one of those lexemes that Japanese poetry has been dragging along as a patrimony since time, literally, immemorial - long enough that scholars have been unable to agree on exactly what they originally meant.  Poets tend to use them more for impact and decoration than sense, although since pillow words tend to be associated (in the manner of the poetic epithets in other traditions) with particular words or classes of objects, they do have certain vague connotations.  "Chihayafuru" (also pronounced "chihayaburu") tends to get used with "god."  In some contexts I tend to translate it as "almighty," for obvious reasons, but that wouldn't work so well here, for a couple of reasons.  First, because its use here is meant to conjure up dim memories (the farther out of high school you are, the dimmer, chances are) of a very, very famous poem in which this is the first line;  and, second, because the main character's name is Chihaya.  Untranslatable.

It's a comic about karuta:  a card-matching game involving the poems of the famous 13th century anthology A Hundred Poets, One Poem Each (Hyakunin isshu).  "Famous" is an understatement:  Japanese kids are expected to memorize this in high school.  The game depends on having it memorized.  You kneel down front of a bunch of cards on which are written the second halves of the poems and somebody reads out the first lines.  You try to be the first person to grab the right second-half card.  And so on.  Most people play it a few times during Japanese classes in school, and maybe at New Year's.  But, as most people probably don't know until they encounter this manga, there's a competitive karuta scene.  That's where this story is set.

It's a little hard to classify. The art (flowers and lens flares everywhere) and the (after a brief prologue) high-school setting, complete with Young Love stories, mark it as a shōjo manga.  The venue where it appears, however, is Be Love, a mag ostensibly aimed at adult women.  And the way it depicts the competitive karuta play lifts extensively and knowingly from sports comics - not by any means exclusively a male genre, to be sure, but enough so that at one point one of the characters makes the meta remark that "some people say this is a boys' comic".

That's a lot of the fun of it.  The main character, Chihaya, is a figure of amusement precisely because here she is, model-pretty (it's a major plot point), with a hobby that most people would probably consider fairly feminine (classical poetry being rather flowery), but she approaches it with all the killer instinct and athleticism of yer typical jock.

And that's pretty much all there is to say about the comic.  It's enjoyable - I've stuck with it through 14 volumes (well, I'm waiting to get my hands on the 14th) so far.  Not particularly deep, but clever and well crafted.  Attractive secondary characters, introduced at almost a fast enough clip to keep the old ones from getting stale.  Well-drawn, dynamic game-play sequences, dragged out to impossible lengths (a single tournament can comprise a whole volume of the manga, and spill over into the next).  A background story arc (a love triangle between childhood karuta buddies) that provides occasional tears amidst the laughter (well, "tears" - I don't think the love triangle is working more than gesturally). 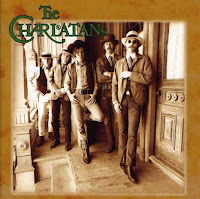 If you loiter in the perceptive doorways of San Francisco psychedelic rock for any length of time you'll run across mention of the Charlatans - like a half-torn away scrap of a concert poster on an alley wall, they hover there, so faint and faded that it takes real effort to make them out, but so eye-catching that you can't quite look away.

Well I'm here to tell you, my friends, that the Charlatans are eminently worth checking out.  Yes it's true that if you go by what's available on silver disc or empty-three they're still more ghost than flesh and blood, more rumor than documented fackshual hiss-tow-ree, but what a ghost! and what a rumor!

I won't run down their story here.  It can be read up on elsewhere on the web, as written down by those more knowledgeable than I.  I'm just going to talk about the music.

There are only two Charlatans discs that you can get.  Only two that exist.  The first is called The Amazing Charlatans:  it's an archival release from 1996 that picks up, evidently complete, the various demo and single sessions that the Charlatans did between their founding and their one-and-only album.  These sessions consist of:  an August 1965 demo session for Autumn Records;  aborted sessions for an album for Kama Sutra Records in early 1966 (only a lone single was ever released);  a demo session at Golden State Recorders in July 1967;  and an early 1968 demo session at Pacific High Recorders.

This disc documents the classic line-up of the Charlatans:  George Hunter, Mike Wilhelm, Mike Ferguson, Dan Hicks, and Richard Olsen.  Actually that's what the disc claims, but in fact the 1968 demo already sees Ferguson replaced on piano by Patrick Gogerty and Hicks replaced in the drum seat (he moved to guitar) by Terry Wilson, so in fact the disc documents (a) the classic lineup and (b) an underdocumented transitional lineup on the way to (c) the lineup that made the Charlatans' one-and-only album. 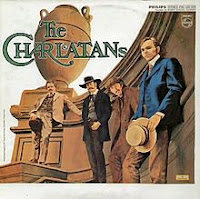 That album constitutes the other disc, the other piece of music you can get your hands on, under the Charlatans name.  They finally made their debut album, their vinyl bow, in 1969 with an eponymous album that documents lineup (c), which was Wilhelm, Olsen, Wilson, and Darrell DeVore.  Not the classic lineup, in fact only 50% the classic lineup, and this fact among others has led to the record's dismissal as a Pale Shadow of the Charlatans That Were, a ghost, a rumor, et cetera.

And yes, friends, it is true that the Charlatans as documented on the archival disc are a much more iron-clad and diesel-fueled motive force than the quartet that tried to bring that force to bear in 1969.  Which is to say that the Amazing disc is, taken in toto, almost enough to make you believe that the ghost is flesh and blood, that the rumor is proved - and in places on this disc, the music's corporeality is beyond dispute.

The Charlatans' finest moment comes from the 1967 demo sessions:  a six and a half minute long take on the traditional "Alabama Bound."  If you do nothing else today, listen to this track.  Loud.  It is a perfect six and a half minutes of music.  Take it apart and you'll find that each component is a microcosm of perfection unto itself.  Dan Hicks's drum part, as powerfully driving and elegantly controlled as the snap of the reins on a team of horses pulling a stagecoach across the desert.  Mike Ferguson's piano part, conjuring images of cool dark saloon melancholy while billows of dust pass by in the sunstruck street.  Richard Olsen's bass, commanding, thundering, and yet unobtrusive, standing glowering in the alley framing everything with its gaze but never filling the emptiness.  The same can be said for the vocal harmonies:  they're ghostly,  they're - roughhewn doesn't begin to do them justice - they're the voices of a parcel of ranch-hands, half-drunk, looking for trouble, but lacking a leader, and this very leaderlessness, this centerlessness, is, again, the key to the track:  the track is full of music, but also of a vast, echoing emptiness, as wide open as the West itself.  And clattering around in this emptiness you have Mike Wilhelm's guitar, alternating between Byrdsy jangle and real C&W leather-and-brass twang, and the coup de grace, George Hunter's psychedelic autoharp.  It's like the little Appalachian accent that reminds you what the cowboy did before he came West.

Put it all together and you have a macrocosm of perfection for us all:  a record more visual than cinema, more aromatic than smellovision, and incidentally a perfect little essay on what it was about the Charlatans that inspired the San Francisco groups, and what it was about the San Francisco groups that tantalized the rest of the hip world.  Viz., a vision that encompassed frontiers both geographical and pyschological, musical and lyrical, contemporaneous and archaic, stylistic and substantive and transsubstantiational, a sound that at its least evoked and at its best realized that vision, and oh yeah, you can dance to it too.  If you're not bopping along to that ending vamp, if you're not feeling the pound of the hoofbeats and the rattle of the stage, the rush of the audience and the swing of delight (to cop a phrase), well, you probably haven't read this far.

They never equaled this record.  The Kama Sutra sessions contain a short early take of "Alabama Bound" that hints at where they'd later take it, and the 1969 album contains a nearly note-for-note remake of the 1967 version that nevertheless manages to sink the ship.

But there are quite a few tracks scattered between the two discs that are almost as good as that, and that, my friends, is not nothing.  To start at the end, the 1969 album has a lengthy take on "Wabash Cannonball" that's quite worthwhile, a shotgun wedding of Chuck Berry and Maybelle Carter.  That guitar is played by Mike Wilhelm, and the guitar isn't even as impressive as his voice, which is as raw and brawny and drawling and sleepy-eyed a piece of rawhide as punk ever chewed on before Tony Kinman came along.

Wilhelm also sang what should have been, but wasn't, the band's debut single in 1966, Buffy St. Marie's "Codine."  You're beginning to get the picture now, I think:  this band could slug it out with the best of 'em.  It's just a crime that they never quite made it into the ring.

A couple more arguments.  I wish I could link you to one of guest vocalist Lynne Hughes's two outings with the band, "Devil Got My Man" and "Sidetrack."  They were recorded during the Kama Sutra sessions and feature the band playing very convincing blues behind a female belter even more stone-faced than Signe and almost as powerfully sexual as Janis.  What ever happened to her?

And of course we have to mention Dan Hicks's stuff.  He'd go on to greater fame as, well, Dan Hicks, but he was a pretty good Charlatan, too.  Check out "I Got Mine."  Heh.
Posted by Tanuki at 7:06 PM No comments: