The Grateful Dead were the best, the quintessential, American band.  This is so obvious that I won't discuss it.

What surprises me is that, even so, there's a lot of Dead that's obscure and poorly understood.  Like, I've never understood why the Hunter/Garcia partnership wasted away at the end of the '70s.  Really after Terrapin it just kind of dried up, even though the band kept trying to make records for a couple more years.  And since Hunter was never a performing member of the Dead, what does that mean for him as part of the Dead family in the early '80s?  It's easy to consider him all but a member (and records even listed him as one for a while) in the '70s.  But what's his relationship to the Dead in the '80s?

What raises this question for me is that I just recently listened to his 1980 record Jack O' Roses for the first time.  Previously I'd only heard Rum Runners and Tiger Rose, and to be honest I wasn't too impressed.  They're valiant attempts at records, but it was easy to see that while he's one of the music's great lyricists, he just wasn't that great a singer or player.

But Jack O' Roses is brilliant. 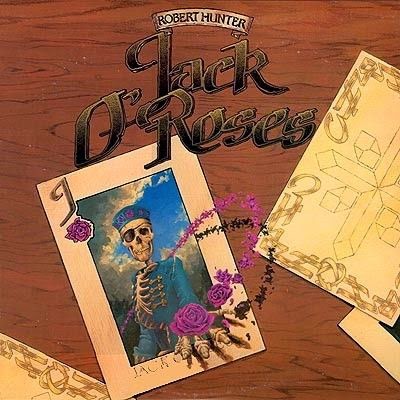 the "Terrapin" lyric.  But that's not all.  He surrounds it with a number of other tunes that are tied to it lyrically:  his version of "Stagger Lee," which seems like it should be the wrong movie but makes sense with the expanded "Terrapin";  the traditional "Lady Of Carlisle," which is the matrix out of which "Terrapin" was born; and the original "Book Of Daniel," which retells the older version of the lion's den story.  Those seem to be the key ones (although they're not the only songs on the record).  And heard together like this they're a masterful examination of folk song idiom, a demonstration of the folk process.  You can hear how this singer/writer found his way into the old songs and came out with something new;  you can hear "Terrapin" now as a deeper meditation on the strange courtship and faith-testing rituals of the old songs, on the archetypes of soldier, sailor, prophet, lover, on the meaning of the throwaway motif of the fan, and on everything that connects Old Testament time with Old England time and Old South time.

So it's smart and eloquent.  But we knew that about Hunter.  What floored me about this record was how beautiful it is.  It's just him and an acoustic guitar and a bit of echo, and he sounds comfortable and authoritative.  His guitar work is very capable in a folk-revival mode, and at times really powerful.  And his voice, as he approaches middle age, no longer sounds like a weird castoff of the psychedelic movement:  it sounds like that guy at the bar who, when he starts to speak, you shut up and listen.  Not 'cause he's mean or loud, but because he's got something to say.

And so naturally this is among the most obscure and scarce records in the Dead's extended family.  Didn't even get a US release until four years after it was recorded.  But it belongs on any short list of essential Dead records.
Posted by Tanuki at 12:12 AM No comments: