The Who: Live At Leeds 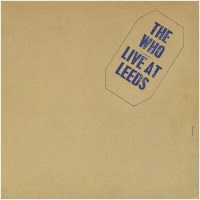 Essential, but oddly enough, I think pretty much any version would do.  I haven't sprung for the recent 4-disc Leeds'n'Hull binge, and I probably won't.  I never got the old 2-disc "complete" Leeds, either.  I find that the 1995 expanded 1-disc set is brilliant, but even then, the tracks I always go back to were (mostly) on the original vinyl.

And they're mostly the covers.  "Young Man Blues," which - if hard flexed cord-tight muscle had a sound, it would be it.  It's a perfect example of how the Who could punch you in the face harder than any metal or punk group could.  It's not about volume so much as it is about rhythm and attitude.  (Love the sonic ambiance on this record, too:  you can just feel the cavernous space of the hall, the draft coming in through the doors, the heat of the spotlights.)

And "Shakin' All Over," which proves that, well, maybe it is about volume as much as it is about rhythm and attitude, but only if volume is made not by turning the amps up to 10, but by pounding your instruments as hard as you can.  Like, Entwistle mashes his bass strings so hard that his notes have the percussive power of a piano.  His fingers are hammers.

And throughout - to continue the muscle idea - the instrumentalists play with the suppleness and unity of a single limb, bones muscle and sinew all working together.  Not mechanically, but biologically - the Who's sound, live, was incredibly human.
Posted by Tanuki at 6:57 PM No comments:

This is the book that shared the 144th A-Prize with Nishimura Kenta's Kueki ressha:  KikoTowa きことわ by Asabuki Mariko 朝吹真理子.  Why do I do this funny thing with the capitals in the romaji?  Because the book comes complete with its predetermined foreign-language title, in small print on the cover:  Kiko et Towa.  That is, the two main characters' names, Kiko and Towako, have been combined into one cutesy noun:  they are, collectively, KikoTowa.

That's never made explicit in the book, actually, but thematically that's certainly part of it:  Towako especially keeps having dreams or half-dreams in which she sees her hair and Kiko's merging into one, connecting them.  Symbolically the frontier between them is constantly threatening to dissolve, allowing their identities to merge.

So, the book is about two women who were friends as children, twenty-five years before.  Towako grew up and still lives in Hayama, a beach-town south of Tokyo known as a retreat for the wealthy;  Kiko's family owns a summer house there and used to visit every year.  Towako and Kiko were constant companions every summer, and then Kiko's mother died and they stopped visiting Hayama.  Now, 25 years on, Kiko comes back down to oversee the dismantling of the house - they're selling it.  Kiko and Towako are reunited and share their memories of childhood.

Is all that really happens in this book.  It's uneventful, to say the least.  Which is not in itself a damning circumstance:  there's a lot of potential there for poetic reveries on aging, on summer beach-resorts, on girlhood and womanhood.  And Asabuki tries - her language leaves me cold, but I can imagine how many others might find it evocative.

But somehow the whole thing falls flat for me.  Just now, writing what I did about the motif of identity-merging, and the setting, and Hayama (nice place:  I've been there), I felt a glimmer of interest.  Like, I might want to read that book.  But in fact I have read it, and it's... Well, it made me feel like I did when I was reading the last two Ishiguro books I read:  like maybe this whole literature thing just isn't for me.  Like maybe I don't even like books.

I think part of the problem might be that the thing just needed an editor.  It goes on far too long.  At 141 pages in hardback, it's on the long end for an A-Prize story, but more importantly I think that all the length makes problems out of what would have been non-issues, or even strengths, in a shorter work.  Nothing happens:  fine, this is J-lit, we expect that.  But it's easier to deal with nothing happening for 20 or 40 pages than for 140.  Dreamlike time-confusion, carefully constructed wispy poetical atmosphere, interplay between reminiscence and right-now:  all of this is easier to sustain in a short story than a novel.  And if the author is determined to draw this out over a longer work, than it needs (I think) some sort of deeper structure to hold it up - some kind of subtext (I didn't detect much in this book), or a variation in tone, some sort of darkness or tension or something.

Then again, I never got past the first 114 pages of Proust, either.
Posted by Tanuki at 6:24 PM No comments: