Emissaries to the Tang exhibit at Narahaku 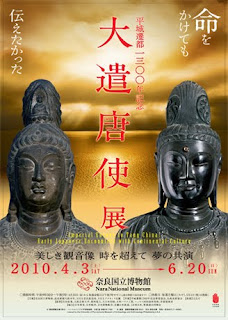 Part of our reason for going to Japan was so Mrs. Sgt. T could visit Nara. Nara is the focus of much of her research, and this year happens to be the 1300th anniversary of its founding as the first permanent (at least, it was intended to be permanent) Chinese-style capital in Japanese history. Those may sound like a lot of qualifiers, but believe me, it was a big deal.

Usually when we visit Nara we hit a lot of temples. This time we didn't have much time; instead we visited museums and special exhibits. The big one of these was at the Nara National Museum: "Imperial Envoys to Tang China: Early Japanese Encounters with Continental Culture." The Japanese title, Dai Kentôshi Ten 大遣唐使展, was much more concise. It can be, because basically everybody in Japan knows what the kentôshi were: they were official envoys sent by the Japanese court to Tang China. There were nearly twenty such missions between the 7th and 9th centuries, and their job was to not only do diplomatic stuff (that's historiographical terminology, by the way) but to bring back Chinese culture, as much and as thoroughly as possible. Basically they were supposed to learn a lot of stuff, and bring back a lot of stuff. What kind of stuff? Books. One of the things they did was to buy as many books as they could bring back in their ships.

Mrs Sgt T's joke this whole trip was that we feel like kentôshi when we go back to Japan. It's true: as academics whose subject is Japan but whose base is the US, in particular a part of the US where books in Japanese are not quite as plentiful or easily obtained as one might wish, one of the things we do when we get back to Japan is to buy as many books as we possibly can. Scholarly monographs and manga, weighty reference works and light trash novels: we order them used, we buy them new, we pile them up and put 'em on boats. We're kentôshi, no doubt about it. And it's some comfort to know we're following in illustrious footsteps. Those who study history are sometimes delighted to realize they're repeating it.

So that was one thing I got out of the Great Kentôshi Exhibit: a better understanding of these people to whom the Mrs was comparing us. I love getting the joke, on those rare occasions I do.

The other thing I learned was: dude, emaki are awesome. I mean, I knew about them, and that they're very important. I've known people who studied them. But they're a little before my own period of specialization, and for some reason I guess I'd just never paid much attention. But they had one on display, the Kibi Daijin nyûtô emaki 吉備大臣入唐絵巻, or (as the MFA, which owns it and lent it to Narahaku for the exhibit, titles it) "Minister Kibi's Adventures in China." I love how the MFA cataloguers (donor?) add that "Adventures," as superhero-ish as it sounds, and as unjustified a "translation" as it is, because it perfectly captures the direct, vervacious spirit of this scroll. Japanese government official travels all the way to China, braving horrible dangers, only to face more peril at the hands of the wily Chinese - but don't worry, kids, he outsmarts them all!

This part was on display: the Chinese challenged Kibi to beat their masters at go. He cheated - he swallowed a piece. They try to find it - the way you try to find any game piece one of your kids has swallowed. You examine his spoor. Awesome!

Only a portion of the scroll was unrolled for view, but what was there was great. Really made me want to know the whole story. Eight years in Boston, and I only discover this jewel now, in Nara.
Posted by Tanuki at 11:06 PM No comments:

I can't sleep on airplanes. Try as I might, I can never do more than drop off for a ten-minute nap. This poses a problem on ten-hour trans-Pacific flights, like the one I was on yesterday.

So how did I spend the time? I finished one of the four books I started in Japan a couple of weeks ago (more on which later). I listened to my iPod until the battery was almost dead. And I watched in-flight movies with the sound off.

Another thing I can't do on an airplane is commit to a movie. If it's worth seeing, I want to hold out for better viewing conditions than a miniscule screen, bad color, cropped frame, tinny sound, and constant interruptions. And if it's not worth seeing, it's not worth turning off the iPod for.

First up was Valentine's Day, starring Julia Roberts and and and and. This kind of ensemble cast thing can be fun: I liked Love, Actually, and some other examples I can't remember - in fact they're usually forgettable, but at least pleasant. This one I couldn't quite tell about, but what I did notice was that according to it, LA is a place inhabited mostly by blonde women with heart-shaped faces. There are some Asians, but they're mostly gardeners (the guy that owns the flower shop); some Latinos, but they're mostly laborers (the guy who delivers for the flower shop); some blacks, but they're mostly entertainers... I don't usually try to harp on this kind of thing, but with the sound off it really stood out.

Next up was When in Rome. We had kind of wanted to see this one, because we have such fond memories of Kristen Bell from Veronica Mars, but this wasn't that. In fact, of the four movies I saw on the plane this one worked best with the sound off. I felt like I was watching a silent movie - in other words I think I got everything I needed to. I could lip-read the few lines of dialogue that were essential, and everything else I could guess from situation and body language... Which is, I'd submit, either high praise for the movie, or pretty damning criticism. Take your pick.

The funnest was Leap Year, starring Amy Adams and Her Hair. Adams is a tremendously winning actress, cute as a button, and she does have nice hair: bouncy, sheeny, perfect for a Clairol commercial. I spent the whole movie just gazing at it. Which was its own reward: at first I was laughing because in every scene she has a completely different hairdo. And her hair is always perfectly styled, no matter how disheveled she's supposed to look. Then I realized that she had different hair in every shot. Clearly what happened is that the hairdresser rushed in between takes to re-coiff her, and the continuity editor never noticed that in one take her hair is tucked behind her left shoulder, and in another it's hanging down in front of her left shoulder. Once you notice it, you can't stop watching - it happens in scene after her scene. Quite amusing.

The last was 500 Days of Summer, which I should have liked if for no other reason than that it starred a brunette rather than a blonde - this, I think, is part of what marks it as Indie in its sensibilities. This, and the fact that the main characters look like five-year-olds dressed by parents with literature degrees. I was not in the mood for precious by this point, so I turned my attention to the iPod.