Roman Polanski's The Fearless Vampire Killers Or Pardon Me, But Your Teeth Are In My Neck (1967) 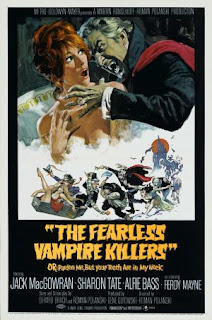 I'm open to persuasion that I just didn't get this film. I've read glowing reviews of it, and went into it expecting wonders, but I didn't see any. As comedy it's horrifying, and as horror it's a bad comedy.

It has some promising elements. A Jewish vampire (broad ethnic comedy), a gay vampire (broad sex comedy): something nice (if destined to become dated) could have been done with these. The justly famous Vampire Minuet at the end: it almost has the breathtaking, I-can't-believe-I'm-seeing-this effect of a Tim Burton scene. The luminous settings: you can imagine Polanski reaching for a kind of Eastern European fable atmosphere (I'm hardly the first to connect the innkeeper Shagal with a certain Russian painter of village life).

But the film simply doesn't work dramatically, for me. None of the jokes are funny. None of the characters are interesting. None of the performances are effective. Jack MacGowran's vampire-hunting professor is typical: visually, he's wonderful, straight out of a Phiz drawing. But his lines are so lame, and delivered with such an odd mix of hamminess and incoherence, that I started to wonder if there was a script at all, or if he was just improvising badly.

The only intriguing performance is by Polanski himself, as the professor's assistant Alfred. Not that it's a good performance - like MacGowran's, it suffers from painfully unfunny comic gestures and a lot of verbal floundering about. And even when he does have meaningful lines, he delivers them with such bad timing that they kill any sense of interaction between him and the other actors. But Polanski has a charisma here that surprises someone who knows him only from his cameo in Chinatown. He has a wistful, graceful look, like a boy-elf in a fairy tale, and it makes him the focal point of any scene he's in.

I want to point out, for what it's worth, that this film was famously butchered for its original Stateside release. A lot of commenters here and there around the tubes seem to think the version that's out on DVD now is the botched version, but it's not. It's the original version. Except for the title: Polanski's choice was evidently Dance of the Vampires. Which is a better title, but wouldn't have saved the film. For me at least.
Posted by Tanuki at 12:34 AM No comments: 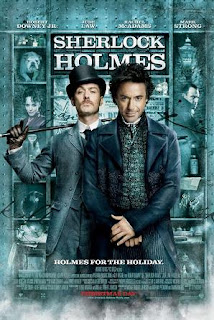 The Tanuki turned 40 recently. He feels old and crotchety. He wears a cardigan sweater that Gap designates the Grandpa - he first started wearing cardigans at 18, with an honest thrift-store find that he wore, as only 18-year-olds can, ironically. He's too old to wear this one ironically: he wears it because it's warm and comfortable.

Not only that, but: I've also read all the Sherlock Holmes stories. I don't have them memorized - don't quiz me - but I've read them, and I liked them. And I'm loyal to books as a rule, especially old books.

Not only that, but: I'm losing patience with Hollywood action movies. Finally, at long last. Mrs. Sgt. Tanuki and I sat through all the previews before Sherlock Holmes, and were rolling our eyes at most of them. When I was younger, I would have wanted to see all those movies. Now it's not like I'm too sophisticated for them. It's just: who cares? I still like some action movies - I was smiling the preview for Iron Man 2 - but... I'm starting to feel that most of them are made for people too young to have been through all this before. I have.

Not only that, but: we only ended up seeing Sherlock Holmes because we couldn't get tickets to Avatar.

I admit to all of this so you'll understand why I say I think I should have hated this movie. It's worse than irreverent toward Conan Doyle's Holmes: it's almost indifferent. It takes the most cerebral of characters and makes him a member of Fight Club. It's not a mystery, it's an action movie, and I'm not sure it's a particularly well made one. Guy Ritchie's good at putting chaos on the screen, but not order; the action here is often a bit confusing.

All of that said, I didn't hate the movie. Mostly, I guess, because Robert Downey, Jr., and Jude Law are so damn good in it. Law is a great Watson - pretty near the page version, I have to contradict myself and say - he's smart as well as stolid. And Downey - well, he may not be a great Holmes in the way Jeremy Brett or even Rupert Everett was, but he's a great actor, always fun to watch, always improving whatever he's in. The two of them have real chemistry, which is good, since the film concentrates so much on their bromance (to use a term some of my students use: those darn kids).

So: not a great film, but pretty irresistible anyway because of its leads. I find myself excited for the sequel (which the ending plainly telegraphs).

I find I'm not the only one to feel this way about the movie.
Posted by Tanuki at 10:03 PM 9 comments: