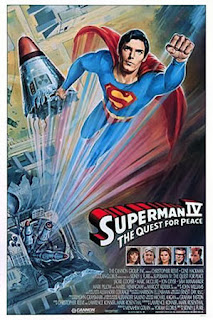 something worthwhile.  Maybe not worth your while, but at least something that I'd enjoy going back and reading.  (Part of why I blog is because I forget things.  I think my way down a particular road to a certain distance, then get distracted and forget, so that next time I go down that road I end up retracing my steps, and usually not getting any farther than I did the last time.  A good blog post for me is when I can go back and read it and find myself exactly at that same spot on the road  So that maybe I can get a little farther this time.) (I still don't know that I ever do.  But anyway.)

I'm not sure I have.  Busy, distracted, etc.  It's on me.  But to some small degree I think it's also on the films themselves.  What I've realized is that the original Superman series was kind of a botched job start to finish.  Even the first one, which I think is one of the great superhero movies, one that I'd point to as a reason this genre deserves to be taken, occasionally, seriously, is full of compromises that ruin, not it, but the second movie.  (I can't get over the fact that the Donner versions of both films have to end with the reverse-time trick because he used it in the first film.  There's no perfect opening one-two punch to be had, even in the imagination.  The myth is marred.)

They get worse from there, steadily and unswervingly.  But it's not until the fourth movie that they lose the plot altogether.  Up through III there's still some sense that these things have a subtext, must have a subtext.  I think it happens to be the same subtext each time:  the tension between power and responsibility, the idea that Superman's superhumanness precludes human happiness.  He can't indulge himself.  He can't love one woman because he must love all mankind.  That's there in the first movie, but sort of in the breach:  he chooses to break the rules to save Lois Lane.  And if the series had ended there it would have been a really interesting statement - Superman's so powerful he can break even the universe's moral rules and get away with it.  Ultimate wish-fulfillment fantasy.

But that was never Donner's vision:  he always intended, it seems, that the first film's triumph turn to ashes in Supe's mouth.  His vision for The Superman Story was for Superman to learn that he can't have it all - in order to save humanity he must give up his own humanity.  Self-sacrifice.  The Jesus thing.

Lester may have never taken the series seriously, but he was a serious enough filmmaker to understand subtext, and the only reason III works at all is because Lester works in the Superman-vs.-Clark Kent subplot.  Superman divided against himself.  But in terms of the myth it's really just a rehash of II.  Superman is tempted (okay, poisoned) into using his power for his own pleasure.  And this strikes everybody as Wrong, and so Clark Kent has to knock some sense into him.  It advances the thinking on this theme a little, in that this time it's Superman's humanity that has to come to the rescue, rather than be sacrificed - we're allowed to think that his moral perfection is divisible from his physical perfection, and that his moral perfection is embodied in his human self rather than his Kryptonian.  But still it's about loving the one vs. loving the many - it's just that the one in this case is himself.  (And this is why the Lana Lang subplot, while fun, doesn't work - Superman is supposed to have learned that he can't fall in love.  By endorsing a Superman-human relationship in this film Lester turns Superman's rejection of Lois Lane into a rejection of the city girl for the heartland girl, which is yet another very-'80s distasteful aspect of this film.)

So:  it's not great subtext, it's not new subtext, but it is subtext.  It is, in other words, a brain.  An effort to at least pay lip service to the idea that Superman might mean something.  It's there in Supergirl as well:  we can see Supergirl and Selena undergoing parallel female awakenings, learning the potential of their own power, and deciding how to use it.  Power vs. responsibility again, but cast in typically '80s gender-retro terms:  the responsible use of power for a woman turns out to be protecting hearth and home (Argo City), and the selfish use turns out to be controlling men, both sexually and perhaps politically.  Not cool.  But not totally brain-dead.

Superman IV is totally brain-dead.  Not only does it lack interesting subtext of its own, but it completely misunderstands the subtext of the films that come before it.  It doesn't just fail to get Superman right, it gets him wrong.  It desecrates Superman.

But the romanticness of it is what leads to trouble:  Superman falls in love with Lois, and that leads him to shirk his responsibilities, and so he has to undo it.  Erase Lois's memory of his loving her, in Lester's version;  in Donner's erase the fact that it ever happened.

In IV, Superman gets depressed, so when Lois comes over he takes her flying.  And this time he drops her - tosses her - always catches her, but still.  It's not like he can give her the power of flight - all he can do is throw her.  Anyway, it cheers him up, although at times it seems to scare her.  And then when it's all done, he kisses her and erases her memory of it.  Do you see what's wrong with this?  He uses her for his own pleasure, and then escapes accountability for it by toying with her mind. Superman rufies Lois Lane.

This one I'd never even heard of.  Evidently it never got a US release.  But of the five films in the

original Superman series, it's not the worst.  It's not even the second-worst.  On the other hand, it is the third-worst...

What it does badly is pretty easy to identify.  It's borderline incoherent a lot of the time - like, on a basic narrative level, it's just hard to figure out who's doing what or why.  Or maybe it's just so poorly thought out that you don't want to figure out what's going on.  Why does it take us until near the end of the movie to realize that the villain's strangely decorated lair is actually a carnival haunted house?  What's the purpose of delaying that information?  It's not much of a payoff when it arrives;  more of a "huh."

But plot holes aren't, in and of themselves, a real problem for me in superhero movies.  The bigger problem in this film is that the midwestern town it's mostly set in is undoubtedly the ugliest slice of America ever committed to celluloid.  Dirty, drab suburban sprawl, full of random power lines and no trees,  fast-food joints and strip malls, all crammed together in a shallow frame so we can make out all the corporate logos (product placement is always everywhere in this series), just before they get squashed by a not-terribly-fast-moving tractor.  Watching it I half wondered if the whole thing was a clever and hard-edged satire on American consumerism.  I almost wish it was.

The tone of this movie, at every turn, is just off.  Weird.  Sometimes it's weird in a good way, like Supergirl's first flight.  It's so wide-eyed and airbrushed that you expect unicorns to pop up, or Shaun Cassidy, but it works in a strange way.  A Girl's First Flight.  Similarly, the opening Argo City stuff with Peter O'Toole is bad, bad, bad, but strangely enjoyable - vaguely reminiscent, for sheer vervaciousness, of such Gallic s-f masterpieces as Barbarella or Fifth Element.

The best part of it, the one really good thing, is the villains.  Faye Dunaway, Brenda Vaccaro, and Peter Cook as a trio of backbiting, not-too-imaginative witches.  The parts are underwritten - like I say, they're given a great lair but the filmmakers forget to explain it until it's too late to care - but all three of the actors camp it up marvelously. There's an opportunity for some kind of mythic resonance here - contrasting types of Girl Power - and it gets lost in the mess of the script.  But Dunaway and Vaccaro's chemistry almost delivers it anyway.

Posted by Tanuki at 9:08 PM No comments: