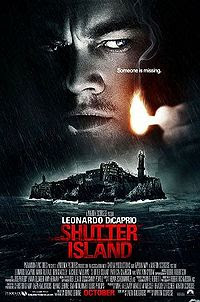 Our first reaction to Shutter Island, Mrs. Sgt T and mine, was: hey, isn't that Peddocks Island? Sure enough, it was. That's a great place to go on a summer's day with a picnic lunch.

My overall reaction to the movie - my aesthetic reaction - i.e., did I like it or not... I did. I feel about it more or less the way Jim Emerson does. I don't feel it as sophisticatedly as him - I didn't make the specifical Hitchcock connection, shame to say - but even without getting the references you can get that it's a movie reveling in old-fashioned horror and melodrama. Doing it well, too, and I enjoyed that.

I'm not going to talk much about the twist (still: spoiler alert) except to say that it's delivered with exquisite balance. There are a lot of hints, but then again a lot of them are so in keeping with the melodramatic style of the movie that you're not sure when you're watching if they're really out of place details or just part of the overall stylization, or... The ambiguity in this film is quite thorough: there's always at least two explanations for anything.

What moved me most was how long this ambiguity was maintained. Right up to very near the end, I was able to convince myself that the twist wasn't really a twist, but a fake. The reveal is sudden, but at the same time very gradual in assuming the weight of reality. As a suspense builder it's great.

But what I'm more interested in, as a takeaway from the movie, is how this ambiguity contributes on a thematic level. The conspiracy theory of the first half is far-fetched, yeah, but is it really? The US government coopting ex-Nazis, carrying out nefarious research on captive populations, doing anything in the name of anti-Communism... That's not so far-fetched, is it?

The twist effectively denies this, doesn't it? It says that only an insane person would believe that, doesn't it? And that's a hard verdict to accept in 2010. That, more than anything, is what had me hoping right up to the end that Teddy was really Teddy, and not Andrew.

The stakes, in other words, are these. Either (a) the traumas of modern history are so bad that we can only survive by making up an elaborate fantasy reality to mask them - by willing ourselves to become insane - or (b) our internal lives are so fucked up that an elaborate conspiracy theory actually represents an improvement on real life. It's to the movie's credit that it avoids committing itself to one of these views for as long as it does.
Posted by Tanuki at 11:37 PM No comments: 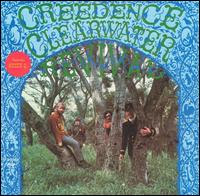 Take for instance this song, "Porterville," a single in 1967 and a feature on their eponymous first album in 1968. You never hear this on the radio. This was before CCR had any hits, so this song gets forgotten, but that's not right. Why? 4 reasons.

1) That rusty barbed wire guitar rhythm. Doesn't sound like a freight train, more like an empty produce truck that you hitched a ride on bouncing through the Central Valley during a drought.

3) John Fogerty already has his Little Richard scream down: it makes his lead vocal sound so much tougher than the backing that the "I don't care!" refrain sounds almost cute.

4) The title is never mentioned in the lyrics. Is it this Porterville or this one? Geographically it's probably the one in California, but given CCR's Southern obsession it just could be the one in Mississippi. Does it matter? Isn't part of CCR's point that the South, the beauties and maladies associated with it, is everywhere in America?
Posted by Tanuki at 11:34 PM 1 comment: 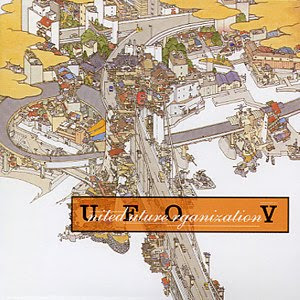 I don't know how to describe United Future Organization. Their music I can describe: acid jazz, i.e. jazz crossed with club music; cool, baby, cool. But are they a band? Are they musicians? They were a trio of DJs, two Japanese and one French, and they were probably the most musical, not to mention musically satisfying, of the whole mid-'90s acid jazz thing. A thing I liked a lot, incidentally. But whence the music? I saw them once, in a club in Roppongi called Yellow, in '97 or '98, and yes, they were DJs. I was never enough of a club habitué or aficionado of club music to know precisely how records by this kind of outfit are constructed. I know they use samples, but is it all samples?

Take this masterpiece, for example. From their fifth and last album, V, released in 2002; they were past it, just as the whole acid jazz thing had been left behind by the ever-fickle club music scene; the album wasn't their greatest, although it did have a spellbinding cover by Yamaguchi Akira.

"Listen Love" was composed by Jon Lucien, and I've never heard his version but this isn't just a remix of that, because the credits list Jeffery Smith on vocals. I can't find a recording of it on any of Smith's albums (that I can find online; and Amazon really ought to spell his name right), so this is probably a recording original to UFOV. Then why are there no credits for anything other than vocals and piano? Are Messrs. Matsuura, Yabe, and Sebbag actually playing those other instruments?

No matter. The record's a, like I say, masterpiece. Smith's vocal is as lush and romantic, as many-facetedly romantic, as you could wish for. The beat, the groove, is seductive. And the piano - by demigod Yamashita Yôsuke (I saw him once, too, at a fireworks display, of all things, in Ôgaki, of all places, in 1994)(I mention these things because it's so rare that I actually go hear live music that I can remember each one, basically) - well, just listen to it. It's romantic, yes, but not in a soft, sweet way. His piano is a nervous but expert lover, touching you in all the right places, but so fast and unexpectedly that you're not ready for it. It's an eloquence, an insistence, that makes his need and yours plain to feel, combined with an assurance and a knowledge that enable him to fill those needs almost in the moment that you become conscious of them...
Posted by Tanuki at 11:53 PM No comments: