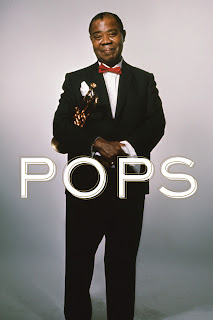 I mentioned that I was reading this, Terry Teachout's new (2009) bio of Louis Armstrong, Pops: A Life of Louis Armstrong. Here's what Popmatter says about it - a good summary of what the book's trying to do and how it does it. And here's Louis Bayard with a more philosophical take on the book. N.B.: "It wasn't until I read Terry Teachout's exceptional biography that I realized quite how problematic happiness can be. Or how heroic."

I'll second those. It's the only LA bio I've read, so I can't speak to how well it handles his life, but as a book, it feels both well researched and balanced, and it also engages very deep questions about what the old Greeks would have called the comic dimension in art. The happy art, as opposed to the tragic - the old question of why comedies never win Oscars, etc. It's very thoughtful, and very eloquently written.

What I'd add, what I loved about this book, is how it gives equal weight to all phases of the man's career. I'm always interested in the complete career of an artist. I hate a bio that spends 90% percent of its space on the artist's formative years and first triumphs and skips over the decades of maturity. I want to know how an artist faced getting old, becoming obsolete, how s/he dealt with the long grueling business of a life in the arts, in a business where the dice are loaded in favor of the Next Big Thing.

Reading Teachout's bio, I realized, for example, that I've encountered this life before. Armstrong's career was startling similar to Elvis's. Both had a white-hot burst of creativity in their twenties, during which they cut a series of records that set the template for a new music. With Louis, it was the Hot Fives and Sevens; with Elvis, it was his Sun sides. These are records that everyone can agree on, that have never grown old and most likely never will. They changed everything, and begat everything.

Each artist then followed these with a series of records that weren't quite as golden, that initially captured a lot of the initial inspiration but gradually (the critical take on them goes) lost the thread, as the artist got lost in the pop star. With LA it was his big band sides of the '30s; with Elvis it was his RCA sides in the '50s.

Each artist then spent the rest of his life making, essentially, pop music. Here's where the parallel is particularly striking: both Elvis and Louis embraced the role of entertainer, making music that spoke to themselves and their audiences, critics be damned.

"Critics be damned" doesn't quite cut it - in both cases, the critics were of a later generation, judging the artist by canons of taste that evolved out of the music that emerged from the initial era of that artist's creativity. The Hot 5s and 7s spawned serious jazz; that spawned jazz critics; the jazz critics naturally assumed that the creator of the Hot 5s and 7s shared their tastes and standards, and when they learned that he didn't, they decided he'd sold out, not realizing that the Man Himself had always loved pop, had always love entertaining. Something similar happened with rock: it was easy for Rock Critics, when they crawled up out of the primordial soup of dorm-room debate, to hear the rock in Elvis's earlier work, but it was much harder for them to hear or appreciate his love for mainstream pop crooners, for close-harmony gospel vocal quartets, etc. So in both cases, the critics (and I don't mean to demonize criticism as an endeavor) were hating on the artist for not confining himself to something the artist had never ever meant to confine himself to.

And in both cases, the artist had such a massive popular appeal that he was essentially able to bypass the critics entirely (this is not so rare), and play out his career on his own terms, entertaining until the end.

(This isn't even the end of the parallels. There's the whole matter of managers - Joe Glaser and Col. Tom Parker would certainly have hit it off...)

There's another parallel that strikes me, this time not with Elvis but with Dylan. Armstrong spent the last two decades of his career touring with the same band, the All-Stars. Not the same personnel - there was a gradual changeover at all positions - but the same basic musical conception and instrumentation. And he toured constantly - this was his lifeblood - he was always out there getting it done. He made lots of records, too, but with a few exceptions these didn't seem to have had much to do with the All-Stars, who were mostly just a performing unit. And the records seem to have had spotty success - some big hits, some critical darlings, and a lot of forgotten sides.

This sounds a lot like what Dylan's been doing over the last couple of decades with the Never-Ending Tour. Like Armstrong had in the late '40s, Dylan reached an artistic crisis in the late '80s, where externally he appeared to be drifting into irrelevance, and internally he seemed at an artistic impasse. And he responded by putting together a small band and going out on the road, which is where he's been ever since, making his art fresh nightly. He's also made lots of studio recordings over that period, but for the first decade these bore only an oblique relationship to the NET band (that began to change in 1997), and in any case a true appreciation of the last couple of decades of Dylan's career can't be had by listening to the studio recordings alone. You've got to come to terms with the NET.

I sense the same is true of the All-Stars, and it's perhaps this book's greatest strength that Teachout devotes a lot of space to exploring the substance and meaning of Armstrong's live work in the All-Stars era. We haven't yet had a Dylan bio that does justice to the NET years.
Posted by Tanuki at 12:15 PM 1 comment: