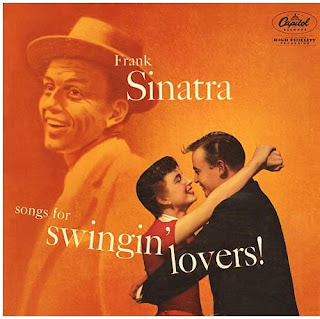 Idol was doing Sinatra this week, and that made me pull out my only Sinatra disc and see if I was ready to change my mind about him. Nope.

What do I hear when I hear Frank Sinatra? I hear the aesthetic that Mad Men satirizes so subtly, lovingly, and remorselessly: I hear mid-20th century American white male privilege swinging its big (but not as big as it thinks) dick. I hear hedonism without anybody actually having any fun. I hear sex as self-assertion, not as communion. I hear incredible craft and talent applied to incredibly unambitious projects. It just sounds fake to me: I don't believe a word Sinatra sings on this record.

All but one of the songs here were recorded in a week of sessions that lasted from January 9 to 16, 1956. Now dig this: on February 7 of that year Ella Fitzgerald would go into the studio (the same studio, Capitol's in Hollywood) to embark on her songbooks project, beginning with Cole Porter. Swingin' Lovers! contains two Cole Porter songs ("I've Got You Under My Skin" and "Anything Goes") that also appear on Ella's Cole Porter Songbook. Compare Frank and Ella on "Anything Goes." I can surely appreciate the skill in Frank's version, the authority, but authority to what end? Ella gives us joy, laughter, playfulness, in addition to skill and authority; Frank just gives us authoritay. I know that "Under My Skin" might be a fairer comparison to Frank, since it's one of his signature tunes, but even there I give the edge to Ella.

Now let this blow your mind. The very same week that Sinatra was recording his album, Elvis went into RCA's Nashville studio for the first time and cut "Heartbreak Hotel."

Give me Ella and Elvis, America. You can keep Frank.
Posted by Tanuki at 11:12 PM No comments: