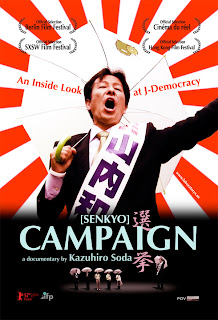 Documentaries, the Tanuki readily admits, are one of his blind spots in film appreciation. He saw one the other night, Campaign (Senkyo 選挙), directed by Sôda Kazuhiro 想田和弘 - it was part of this series again, just like Tekkon kinkreet. But because I'm basically ignorant of documentaries (the only Japanese theatrical documentary I've seen is Ichikawa Kon's Tokyo Olympiad - a corker - this is nothing like that, though), I can't put it in its natural context of either Japanese docs or political campaign docs.

That said, I really liked this one, on at least two levels.

First, it's compelling human drama. It takes a fly-on-the-wall approach (single handheld camera, no narration, no music), so you're free to take from the film what you will. But by the end it's apparent that Sôda has edited together a really interesting portrait of the main character, Yamauchi, the political novice running for city council in Kawasaki, and of his wife. Interestingly, we're never quite clear why he's decided to enter politics, but we get a real good view of what the ordeal is doing to him and his wife psychologically. We also get great thumbnail sketches of the political veterans who surround him, from the bored Diet member who's been ordered by the party to take Yamauchi under his wing to the self-important "supporters" who do much of the legwork for the campaign. As a story, it's satisfying. Effectively told, despite not "telling" anything at all.

I guess what I mean to say is, it works as a movie.

Second, it's a fascinating picture of a political machine. Issues play only an incidental role in this campaign - you could argue, and Sôda at least wants us to consider arguing, that they're incidental to most campaigns, but it's clear that at this level in Japanese politics, issues are a distraction. What we have here is machine politics at its purest: winning the election is almost entirely a matter of mobilizing the right people to lean on other people to vote the way it's been arranged for them to vote.

It's well known that the LDP, of which Yamauchi is a representative (a carpetbagging representative - the LDP handpicked him and told him to move to Kawasaki so he could run there), is above all a machine, and this film shows us how that machine works at its lowest level. In that sense it's a very specific movie, but it's one of those specificities that achieves universality. You can see Boss Tweed here, Mayor Daley, Marion Barry.

I guess what that means is, it works as a documentary.

Do I have that right?
Posted by Tanuki at 8:10 PM No comments: