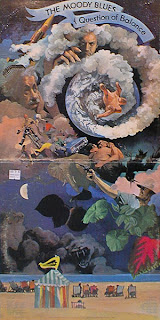 Their fifth record, A Question Of Balance, arrived in August, 1970. By this time the terrible infant known as prog had been dropped like a bouncing baby bomb upon the unwary rock scene by the butterfly-slaughtering Crimsoids. I.e., their first and second albums had already been released, their first spin-off band was in the works. Yes, Genesis, and Tull were busily sowing seeds of pomp in their own soon-to-be burgeoning fields as well.

I keep mentioning prog as a context for the Moodies, and I think it was - but less so after 1969 than at first. Between 1967 and 1969 prog as it would later come to be known was but an aspiration, a mote in the collective eye of several disparate rock gods. A tendency and an option in post-Beatles psychedelic (read: serious) pop. But not a thing unto itself.

The Moody Blues were one of the premier serious-pop groups of the post-Summer of Love era. As such they had aspirations - you can hear in their music a consciousness of art musics of past eras, and a joy in finding them to be among the new possibilities opening up for beat music. Conceptual ambition - suites, concept albums - and musical sophistication - instrumental passages, complicated arrangements - were important elements of their pop music.

But in 1969 King Crimson threw down a gauntlet: prog was thenceforth going to have to be more than that. The idea would be to thenceforth eschew pop music as a sensibility, as a self-definition. Prog - and let's leave aside for the moment the fact, or is it a notion, that KC and many of the other practitioners of prog rejected the label - demanded more. It demanded that its practitioners demand more. It demanded that it be demanding.

If you've been listening seriously to the Moodies you'll immediately realize that this doesn't fit them. They could be challenging at times - sort of - but usually they were quite accessible. Even easy. Certainly not demanding. From the lofty p.o.v. of the prog purist this could be seen as a lack of something - sophistication, chops, ideas - but I don't think that was the p.o.v. of the Moodies themselves. That is, I think they were always a pop group, never a prog group per se. This is where the year 1969 becomes important. The Moodies were a pop group, a serious pop group, and in 1968 and 1969 that meant they did proggy things. But then when Crimso came along and showed the world this bawling thing known as a prog group, the Moodies must have immediately realized they weren't one.

Their two 1969 albums, when they were on top of the pop world, and when their brand of serious pop still seemed state of the art, had progressive trappings, progressive moments and moods. In 1970 they stepped back from that: no more multipart suites, less obvious album concepts, and less recited poetry. I think, in other words, what we hear on A Question Of Balance is the Moody Blues stepping back a bit from the prog precipice. Let others jump.

It was a wise choice, I think: it was a band recognizing its limits, knowing what it could do and couldn't do. And despite the way I've characterized it, I don't think this step back should be seen as a failure of any kind. In fact, the relaxation of their ambition allowed them to concentrate on what they did best, which was serious pop music. No more, but no less either.

Clearly I'm still trying to explain to myself why I like this band. What it is about them that can hold my attention after all these years, and in spite of the weaknesses and sillinesses I can readily hear in their music.

For the latter, let's take "Minstrel's Song," a John Lodge number on the second side of the record. It perfectly typifies what I've called the psychedelic-choirboy nature of the band. Rhythmically the song is built on the frame of the Beatles' "Baby You're A Rich Man": same stumbling rhythm guitar, same chugging drum beat. So far so good, but instead of getting weird like the Beatles do, the Moodies get nice. Over this frame they drape a vocal arrangement that's perfectly glee-club, school ties and all: quite pleasant harmonies, but undeniably square. The song's counterculture bona-fides are established, however, by the lyrics, which are as idealistic as anybody could hope for in 1970: "listen to the one who sings of love / everywhere love is around."

I'm no hippie-puncher. If anything I'm a hippie-puncher-puncher: I have a fond weakness for peace-and-love sentiments, and little patience for those who sneer at them. I mean, what have you got that's better? But this song, I have to admit, is pretty goddam dippy. And yet...nice use of the "Baby You're A Rich Man" groove, dude.

But the lame moments on this record are more than healed by the strong moments:

"Questions," the partial-title track, pure FM bliss. A galloping rocker, in the middle of which is embedded a gem of a Justin Hayward ballad. An anthem that knows it's an anthem, but works just the same. And it works because every part is so well crafted, from the mile-a-minute strumming of the acoustic guitar to the call-and-response mellotron fanfare, from the dance-y little bass solo to a drum part that would do Keith Moon proud.

"And The Tide Rushes In": a philosophical ballad, almost a sea-chanty, by Ray Thomas, perhaps his best song, completely mainstream, and completely perfect. Guitar work that sounds too good to come from a rock band - like it strayed in from the Camelot soundtrack.

"Melancholy Man": Pinder strangeness, starting out almost as a parody of Hayward's ecstatic moodiness, then morphing into something more apocalyptic by far. An apotheosis of sorts in a cathedral of fuzz-toned light.

What we have in all of these numbers - and even, for better or worse, in "Minstrel's Song" - is a very canny understanding of how to bring the most out of a melody. Arranging skills, I guess: by this point rock had taken in enough musical ideas, both from within and without, to provide a really rich set of options for developing a song to its full potential. Instrumental colors, ways to make a bridge relate to a verse, balances between solo vocals and chorales. And of course very tasteful playing and singing all around. It's professional, is what it is: and I guess that's what I mean by "pop." This isn't the music of desperate artists trying to claw out a space for their vision: it's the work of craftsmen who know what will please their audience, as well as themselves.

The question has always been: is there any place for that aesthetic in rock and roll? Maybe not. But there's a place for it in my life.