When I bought this last summer it was Banana's most recent thing (ジュージュー, 2011).  By the time I got around to reading it, it wasn't.  She's very prolific. 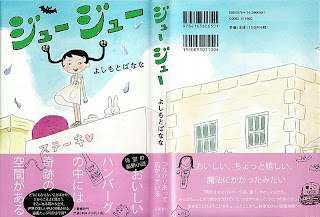 In other words, the story is absolutely standard Yoshimoto Banana.  Complete product.  If you haven't read much Banana before, this will give you the message.  If you have, this might be unnecessary.  Except.

The one interesting thing about it is how completely intertwined it is with the manga.  This is foregrounded in a number of ways:  the cover art sports Sarami, Pyonko, and Puramuchan (another character) on the roof of the manga's steakhouse, while the obi and endpapers display cute little Asakura Sekaiichi goth cartoons;  the characters in the novel are aware of the manga;  and Banana's inevitable postscript thanks Asakura for inspiration.  You can't miss it, even if you're like me and had never heard of the manga before.

And:  it's also interesting, to me at least, how this fits into Banana's latter career.  Like her work with Nara Yoshitomo and Naka Bokunen, this is a species of collaboration (if mostly one-sided) with a visual artist:  again we find her decorating her words with the images of a younger hip artist.  And, in particular, this lays bare what have always been the hidden but obvious manga resonances of Banana's literature.  Like, in some ways she's always been shōjo manga without the illustrations.  Now we see that at work.
Posted by Tanuki at 8:45 AM 2 comments:

(If anybody noticed the silence, sorry for it:  it's been the month from hell in Tanukiville.  Illness, travel, work.  Lots of life-weather, and I've been under all of it.)

I spent five hours on a plane today, and most of it I spent reading Jigoku no Saramichan 地獄のサラミちゃん ("Sarami, the Princess of Hell," in the official English title;  I'd really rather translate the title as "Salami from Hell," but that would be unwarranted...) by Asakura Sekaiichi 朝倉世界一.  A girls' comic from 1998 to 2002;  collected, it comes to one thick bunkobon volume. 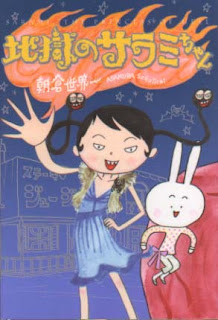 I read it not for its own sake but because it was the intertext, the manga palimpsest, for the most-recent-but-one novel by Yoshimoto Banana, which I finished the last time I spent hours on a plane, a couple of weeks ago.  I'll blog that.  But first I'll blog this.  Because it's probably better than the novel...

Basic setup:  17-year-old Sarami is the daughter of Ema, the King of Hell.  But she runs away to the world of the living to realize her dream of becoming a supermodel.  She settles in a town that seems like it's supposed to be Japan, but looks like Arizona in cowboy days, and gets a job as a waitress at a steakhouse called Jūjū ("sizzle") run by a bunny rabbit named Pyonko ("hopsy").  And hijinks ensue.

It's a light, cute comic, but much less cloying than the description above might make it sound.  It's no great shakes narratively - most of the gags work in a pleasant enough way, but aren't funny enough to make you disturb your seatmate, let's say.  But the aesthetics - the art, the character renderings, the world - are really hooky.  Enough to make it worth a read.  In twenty years this'll be a time capsule of a particular variety of turn-of-the-century cute.

What variety?  Basically if you could imagine a world, and a story, and characters, based entirely on Ed Hardy clothing designs, this is what you'd come up with.  A kind of biker-gang/cowpunk/rocker-chick/tattoo-slut/bling-toothed pirate/fur-Stetson nirvana - all of these varieties of transgressiveness filtered through the Harajuku merchandising machine and made safe for consumption by teenage girls.

And that also makes it sound like I'm condescending to it, but it does a magnificent job of realizing this aesthetic, and any work that can realize a new aesthetic has done something important, in my book.