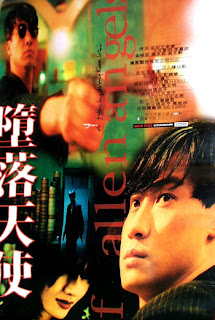 Even if you don't know that Fallen Angels (1995) grew out of what was meant to be a third story in the previous year's Chungking Express, you may find yourself making connections between the two films.  Common settings (the Chungking Mansions), similar structures (two parallel love stories only tangentially related, only this time they're intercut rather than back-to-back), recurring motifs (canned pineapple, blonde hair) take you there.  And thematically this feels very tied to its predecessor, with its emphasis on relationships doomed before they start by - what, ennui?  Modernity's anomie?

I think the film may be less satisfying on its own, though, then it might have been as a third part of Chungking Express.  I gather that the hitman's storyline here is what was planned for Chungking, which suggests that the other storyline, about the mute played by Kaneshiro Takeshi, was new for this film.  I don't think the two mesh very well.

Visually, of course, they do because Doyle and Wong are mainly interested, here, in exploring neon-smeared nightscapes rather than telling stories.  But tonally the Kaneshiro storyline is just too light, too goofy;  in theory it probably sounded like it would be a great counterpoint to the hyperviolence of the hitman storyline, but in practice it just gives you whiplash.

The dual storylines do, however, set off one of the great scenes in Wong's oeuvre, when the woman from the hitman storyline and Kaneshiro's mute finally come together, uniting the two halves of the movie.  They get on his motorcycle and ride off through the same tunnel we've seen Kaneshiro zoom down two or three times already, but this time he emerges from the tunnel, while we hear the woman's voice in voiceover talk about feeling closer to this man than she's felt to anybody for a while, and then the camera's gaze turns up at skyscrapers leaning against a gray dawn sky.  It's the first daylight we've seen in the film, the first semi-open sky, and the sense of release and relief are a powerful payoff.

(As usual, the film is most satisfying from a purely visual standpoint.  The big-city-at-night shots are the equal in atmosphere and beauty of anything ever accomplished.  The combination of omnipresent blackness and lights of sickly intensity and unnatural hue stays with you.)
Posted by Tanuki at 11:01 PM No comments: 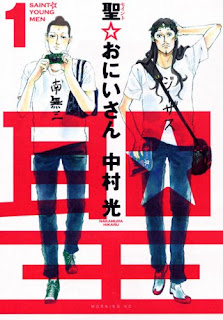 A student of mine turned me on to this manga.  I turned my wife onto it, and she turned some friends onto it.  So we have a regular little St. Oniisan fan club here on the banks of the Willamette.  But I never got around to reading the whole series until a couple of weeks ago when I was sick and it was the only thing I felt like reading.

The author is Nakamura Hikaru 中村光.  The title in Japanese is Saint Oniisan 聖☆おにいさん, but it comes with its own author-specified English title, which shows up on the cover:  Saint Young Men.  I actually hate it when manga do this:  the pre-supplied English titles are almost always geared toward the Japanese audience, meaning they work for people with only a vague grasp of English (sometimes they work quite well from that perspective), but they're lousy when read by a native English speaker.  "Saint Young Men" is a lousy title.  Anything would be better.  How about "Holy Bros"?

But that's the only thing about this series that misses.  Everything else is pure comedy gold.

The gimmick is that, shortly after the millennium, Buddha and Jesus decide they need a vacation, so they come to earth - Tokyo, to be exact - and take an apartment together.  If that sounds like a variation on a classic joke set-up - "so Buddha and Jesus walk into a bar, and Buddha says..." - that's because it is.  It's a killer premise, legendary from the start - be honest, you smiled the second you read my explanation of it.  Already you're imagining the possibilities. 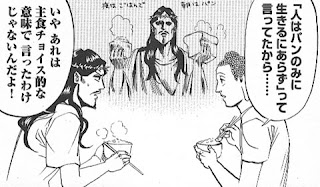 And it gets better, because he's imagined Jesus and Buddha not just as fish out of water, divine personages in modern Japan, but freeters - dudes in their early twenties, aimless and underemployed.  There's a wicked subtext about the superfluousness of religion in contemporary Japan, and the sheer numbers of young people falling through the cracks in the system, and oh yeah, the witty observation that Jesus, as traditionally depicted, kinda looks like a modern hipster - skinny, long-haired, with a wispy beard.  Buddha, too - looks surprisingly convincing in a puffy North Face coat. 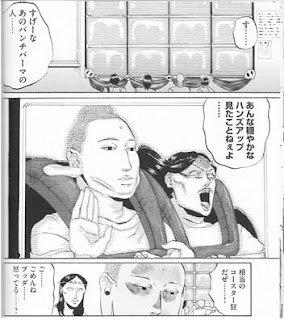 What's amazing about this series is that it lives up to the premise.  Nakamura's six volumes in, and so far he's managed to keep coming up with new jokes.  A lot of them are of necessity variations on familiar themes, but still he's managed to introduce a new twist every time you think the well's about to go dry.  It helps that he's willing to introduce new characters - we get Jesus's homey Uriel and Buddha's boy Brahman, for example, each one of whom brings in train a whole new set of associations to exploit.

I guess what I'm admiring is the craftsmanship.  Nakamura had an inspired idea, but what's making it work is his mastery of all the comic techniques you could think of.  This series is like a textbook of comedy, everything from complicated visual puns to low comedy, character-driven humor and off-the-wall gags.

What it's missing is a hard edge, but I don't think that's a bad thing.  There's plenty of blasphemy in here, but it's all so good-natured and light-hearted that it's hard to imagine anybody getting too het up about it.  Maybe Rick Santorum, but nobody sane.  In fact, somewhat surprisingly given that it's about young men in their early twenties (well, not really), there's been no mention at all of sex.  Nakamura's keeping it family-friendly.  Which ends up giving the whole series this really benign glow.  I'm not saying it's exactly faith-promoting, but it's not trying to grind any axes either.  It's just fun.  Endlessly fun.

EDITED 11/26/11:  I refer to Nakamura Hikaru as a "he."  In fact Nakamura Hikaru is a "she."  Imagine my embarrassment.  Feel free to doubt anything I write about anything from here on out.
Posted by Tanuki at 3:31 PM 1 comment: 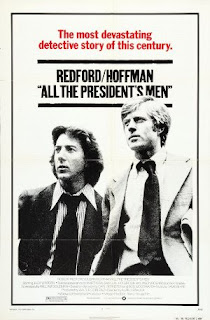 Can't remember why I put All the President's Men (1976) in the Netflix queue, but at the same time I can't figure out why it took me so long to get around to seeing it.  I have a mild fascination with this period of American history, and films about it, on top of which one of my favorite cinematic tropes is the jaded, corroded Washington informant as embodied by Donald Sutherland in JFK and William B. Davis in The X-Files, and of course the granddaddy of them all is Hal Holbrook's Deep Throat.

IOW, it's an important film politically, but also a satisfying film artistically.

But I think my favorite scene, at the moment, isn't one of Holbrook's, but Dustin Hoffman's conversation with Robert Walden, playing Donald Segretti, a low-level operative in Nixon's dirty tricks team.  From the Mouth-of-Sauron smile he flashes when he opens the door to the way he sits cross-legged in his lawn chair, Walden gives us a guy who's still half a college kid at heart, a naughty frat boy only partly grown up, just wise enough to know that what he's done is no prank, is serious shit, but just foolish enough to try to convince himself that it was all just fun and games, and just young enough that he probably half believes it.  Panic and cockiness, regret and disbelief and perverted pride in his own badness, all painfully evident.

Who knows if this accurately represents the real-life Segretti, but as a character in a narrative, as a work of art, it rings true:  I've known people like this.  Young Republicans so sure of their own smartness and their savvy about the System, and so confident that they're serving the side that secretly controls everything, that they feel they can get away with anything, but still young enough to worry that maybe they can't, or that they might actually care that you think they're serpents.  They're usually right about the first, and they usually get over the second.  But not always.
Posted by Tanuki at 12:18 PM 4 comments: