I've been putting off blogging about this film, because I hated it.  But I set out to do this, and I've always thought Bobby Bland's was good advice... 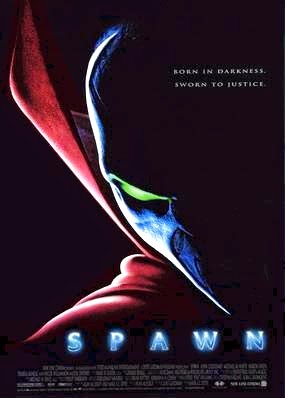 So I think Spawn sets kind of a lower bound for what superhero films are capable of.  I set out to do this because I felt that as the best of the superhero films had achieved something pretty close to sublime in a pop culture way, and even the better-but-not-the-best of them had done some damn interesting things.  So I wanted to understand the whole genre.

But of course I never expected that all the superhero films would be good - I'd already seen enough losers, and furthermore I'm also a believer in Sturgeon's Law.  Here we see it in action.

The lower bound of superhero films is essentially mindless action.  Possessing superpowers presents the possessor with the temptation to use them to satisfy his or her desires:  with great power comes great responsibility is a line that's been used explicitly in at least one superhero film, but it's like the secret moral of most of them.  But some of them don't care, or perhaps set out to cater to the preadolescent in all of us who would rather not have to recognize adult responsibilities.  The infant who just wants to smash things.  Fair enough:  indulging in that fantasy is also part of the genre.  But when that's all the story does, and when it does it badly, then you have...Spawn.  'Nuff said.

Oddly, that was my impression of the comic too.  My only real period of intense, loyal reading of American comics came in the mid-'90s.  I was in my last couple of years of college, there was a comic book store within walking distance of my apartment, I was bored stiff in Utah, my eyes had already been opened to the possibilities of the comics form by my encounter with manga (in Japanese - hardly anything had been translated at this point), and I discovered that American comics were in something of a rebirth.  This was a big era for indie comics, when several big artists and writers were breaking away from DC and Marvel and starting their own companies.  I had maybe a dozen or more titles I followed loyally, and read fairly widely beyond that.  But Spawn was not one of them.  It was pretty clear to me that the new artistic room created by the indie boom could be used for two things.  You could (a) tell stories that the majors would never touch, because they were too weird, experimental, abstract, uncommercial, whatever, or (b) you could tell exactly the same kinds of stories that the majors told, but with more sex and violence.  Spawn was the latter, obvs.  I had no use for it.
Posted by Tanuki at 2:32 PM No comments:

Email ThisBlogThis!Share to TwitterShare to FacebookShare to Pinterest
Labels: all the superhero movies, comic books, movies

I'll admit I had never heard of this character until I saw the film.  I'm aware now that it has a respectable comic book pedigree, but to be honest, watching the film there's no indication that it's anything other than what it feels like:  an attempt to quickly and easily capitalize on current trends in blockbusters, the action-horror film and the superhero film.  A hybrid born of lust for lucre.  In fact, coming after The Crow, this seems like an unoriginal hybrid born of lust for lucre.  Like, "Can we remake The Crow with more video-game violence and less intelligence?"

It wouldn't be quite accurate to say I went into this film with low expectations.  I had very high expectations that it would suck.  Last time Hollywood got its hands on G, it sucked.  At the time I recall I was the one who would always defend Hollywood against my friends who would dismiss standard Hollywood fare as overmoneyed and underthought.  I saw myself as an intellectual populist standing up against elite hipsters.  But Roland Emmerich's Godzilla sucked, and it sucked in all the ways that my friends always said Hollywood sucked.  I felt betrayed.  My eyes were opened.

The new one, I figured, would suck just as bad, but in an up-to-date way.  I was wrong.  It's brilliant.  It does right everything that the '98 version does wrong.  In fact it's an argument for why one might want Hollywood to get its hands on something like this in the first place.

It's a smart movie.  It's full of ideas and it can't wait to share them with you.  This starts in the opening credits, which show you tantalizing bits of information about the post-WWII nuclear program, then redact it before you can really read it.  Note that the '98 version used the credit sequence to set up its version of the monster, too, and that's where the sucking began, because the '98 version's big steaming pile was that it Blamed It On The French, right?  This one places the blame squarely where the Godzilla mythos says it belongs:  on the Americans.  And that starts with the opening credits.

Let's reiterate:  Godzilla was the Americans' fault.  That's the whole point of the original movie.  Every later incarnation in Japan was built on that, even when G became a hero.  This is why the original and its first-series sequels are such primally important documents in Japanese popular culture:  they capture the country's ambivalence about America's nukes, about having them dropped on Japan (first and only), and then becoming America's ally, about responsibility and looking-forward and all that stuff that was clumsily suppressed when the first movie was shown in the U.S.  The '98 film saw itself as a complete reboot (G was arising for the first time in that story), and therefore it needed recently-headlined scary nuclear testing to blame, and that was the French.  But that presented viewers with a moral calculus that said America's decades of nuclear testing, and that whole Cold War thing, weren't enough to wake the monster - weren't in fact monstrous - but that French testing was.  Talk about missing the point.

The new movie gets all that right.  The awakening of G was the Americans' fault, way back in the '50s, and when the current monster surfaces in response to a nuclear power plant crisis in Japan, an American is on the scene, fucking things up.  In fact, this movie is extraordinarily focused on nuclear power as the bogeyman:  Yucca Mountain, transport of missiles, nuclear subs, it's all there.  It's a movie that not only understands the Godzilla myth, but that truly understands why disaster and monster movies of the classic era worked in the first place.

It's a movie that gives Godzilla credit for the potential to actually scare audiences in 2014.  And so, for the first time (despite many years of seeing and teaching and thinking about Godzilla), I really got a visceral, real-time, in-the-moment sense of how it worked.  When they go into Yucca Mountain and throw open that nuclear-waste vault and see, not tidily contained waste matter, but wide open outdoor spaces:  that's a little scary.  That Should Not Be.  That can't help but make you start to think about maybe nuclear power is dangerous.  And so when the monsters are slugging it out in the heart of San Francisco and people are dying by the score around them, you never forget that this is an allegory of how we can't control nuclear power.  What would it look like if there was a nuclear accident in SF?  This is what it would look like.  But worse.

And that's one reason why one might want a Hollywood version of Godzilla in the first place.  If one is not Japanese in the '50s but American in the '10s, one can understand the first G intellectually, but not viscerally:  seeing him stomp on a Tokyo that one only knows from photos and old movies (this is true even for contemporary Japanese, of course - only a couple of the city's landmarks from that movie remain, and the skyline that surrounds them is utterly changed) is cool.  But seeing him stomp on things much closer to you in space as well as time is different.  It brings it home.  Nuclear power threatens us, too.

And it's not Japan's fault.