Mitsuki Dazai and James Nyoraku Schlefer at U of Oregon, 2/19/10

A koto and shakuhachi concert. I'll admit that I probably enjoyed the encore most, the chestnut "Haru no Umi." One of the first Japanese melodies I ever learned to recognize, I used to love it, then I heard it so many times at New Year's in Japan that I realized what a cliché it's become, but tonight I finally heard it fresh again, and noticed, a) what a pretty melody it is, and b) what an interesting and oh-so-early-Shôwa negotiation of Japanese traditions and Western ideas it is. I think I only started to realize it because they played it as an encore, after a couple of hours of the real traditional stuff and the later more fully modern stuff. The hard stuff, in other words. It allowed me both to appreciate the simplicity of "Haru no Umi," and hear it in context.

All my years of concert-going and it never even occurred to me that an encore could have a purpose beyond just, you know, getting you to pull out your cigarette lighter.
Posted by Tanuki at 12:04 AM No comments:

Email ThisBlogThis!Share to TwitterShare to FacebookShare to Pinterest
Labels: concerts 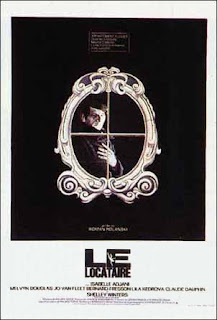 Wikipedia will tell you that The Tenant is the last in Polanski's "Apartment Trilogy," with Repulsion and Rosemary's Baby. And it's true that all three movies use the particular combination of atomization and collectivity that apartment living provides as a jumping-off point for psychological horror.

They're quite sneaky. Living in an apartment building can be like living in the proverbial village, where every aspect of your life is up for public display, and you feel like you're never alone. And yet it's precisely that feeling of communal existence that makes it possible to feel so isolated once you close the door of your apartment. There is a mass of humanity right outside; inside there's just you; it's the mass that makes the you-ness of you so real, and your isolation that makes the mass-ness of the mass so real. The individual and society: it's all right there in a third-floor walk-up.

And these films take that utterly quotidian feeling and make it the subtext for some superb genre films - horror of a quite lurid nature. Repulsion was about a growing inability to deal with the world - a consciousness disappearing into the rabbit-hole of its own obsessions and, yes, repulsions. We, the onlookers, are left baffled. In Rosemary's Baby, by contrast, the evil came from outside, from a place beyond any that a rational modern could have suspected, tapping into deeper forces than even the heroine can hope to resist. In The Tenant, it's the protagonist's very self that is threatened - "when does a man stop being himself?" he asks, and we watch Trelkowsky gradually start to think he's someone else, and by the end we're not sure which "he" is. (At first it appears this is the only installment in the trilogy not to have a female protagonist, but at the end we're not so sure.)

But I don't think it's just urban anomie that these films are exploring. I don't think it's a coincidence that in all three films the central character, the one whose psyche is embattled, is a foreigner. In Repulsion, Carol is French (or Belgian) living in London; in The Tenant, Trelkowski is Polish living in Paris. It's a little more subtle in Rosemary's Baby, but I think the fact that Rosemary is supposed to be a naive Midwesterner in the big city fits this analysis. In all three cases what we have, overlaying the general anxiety of the apartment dweller, is the particular isolation felt by the exile (to use a recently-fashionable romantic term for the expatriate). It's a heightened sense of being a stranger (or is that etranger?), someone bound not to fit in, someone whose expectations of others are bound not to match up with others' expectations of them. But it's more than that. Just as the apartment is a space of solitude in a crowded building, the linguistic and cultural barriers thrown up around the exile mean that his or her innermost self remains impenetrable to the masses that surround the exile. There's a space of irremediable solitude in the mind of the exile (I speak from many years of experience living as a foreigner in Japan). These three films tap into that.

The Tenant is by far the most explicit about it. We get a number of characters (the landlord, the policeman) treating Trelkowski doubtfully because he's not French - even though he is, as he insists, a French citizen. He's robbed, and the landlord suggests it wouldn't do him any good to go to the cops, since he's not French. And when he does talk to the cops, they answer him by examining his identity card a little too carefully - anybody who's had to carry a green card or its equivalent knows how scary a moment this is, even if you're completely innocent. I don't think it's any coincidence that when Trelkowski starts to lose his identity and assume that of the previous tenant, it's not just a woman he becomes, but a French woman (and one interested in Egyptology - deciphering things insuperably foreign).

But the language/psychological divisions in this film go deeper, although I'm not sure this was intended to emphasize the movie's themes. When you pop the DVD into your machine you have to choose to watch it in English or French. Half the cast is French and half not. Each half seems to have delivered their lines in their own language. Which means no matter which language you watch the film in, you'll be hearing some overdubbing: half the actors' lips aren't going to match their dialogue. As near as I can tell, there's no right way to watch this movie. No matter how you watch it you're going to feel you're missing something. The decisive factor would seem to be the lead - you'd want to hear the leading actor speaking in his/her native language, right? But the lead here is Polanski himself, and he handles both the English and French versions of his dialogue himself. And what's his native language?
Posted by Tanuki at 11:14 AM No comments: