Joss Whedon's Much Ado About Nothing

Here's the formula for determining whether you'll like Joss Whedon's take on Much Ado About Nothing.  If you like Joss Whedon, there's a good chance you'll like it.  If you aren't one of the faithful, you may not;  the widespread good reviews this is getting may be proving me wrong, but this feels Whedony enough to me that I could imagine those who aren't part of the cult being turned off by it.  There's a further test, though;  if you like Joss Whedon, I'd guess there's still a fair chance that you care enough about Shakespeare to have definite views on how he should be filmed, and then, maybe you like this, maybe you don't.

I'm part of the cult, I guess, and I do care about Shakespeare, but I think my standards for a Shakespearean production are probably fairly lenient.  Basically, I want the actors to sound like they know what they're saying.  I want the language respected, and for me that means I want it spoken like it means something.  This film meets that standard, by and large;  only Spencer Treat Clark as Borachio sounds overwhelmed by the diction.  Everyone else delivers their lines so that you can sense the intelligence that wrote them, as well as the feelings of the characters who are supposed to be feeling them.

I think that's probably the film's strength:  that it puts the language front and center.  Even the decision to film in black and white, whatever motivated it, has the effect (for me) of deemphasizing spectacle (something the modern setting already does) in favor of language.

On the other hand, I didn't find myself laughing at most of the jokes in what is, really, a very funny play.  I did laugh during this film, but more at the jokes Whedon inserts - little bits of non-scriptural business, camera work, etc. (what he does with the line "even if she were an Ethiope" is classic Whedon).  For the most part I found myself appreciating the jokes, thinking about them, rather than reacting to them.

I'm not going to say this is necessarily a bad thing.  But it does make me appreciate the Branagh adaptation of twenty years ago even more than I already did;  for all its flaws (and it has a few), it approaches the humor with a naïve brio that makes it work more or less as I imagine it might have worked in Shakespeare's day.  At least, I laugh at that film quite frequently.
Posted by Tanuki at 12:12 AM 3 comments:

In just his second full-length hard-boiled novel, Hammett deconstructs the genre.  Even as he's in the 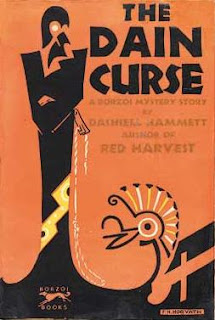 process of perfecting it.

I don't mean he analyzes the genre, or twists it in some unexpected way.  The word "deconstruct" has entered the popular lexicon as meaning nothing more than that, but that usage bugs me;  I've forced myself through enough Derrida (and children of Derrida) to feel invested in making sure that "deconstruct" means something more, or different, than simple analysis.  (In much the same way, I'm bugged by how "kabuki" has come to mean "meaningless posture and bluster" - you can only use the word that way if you're ignorant of actual kabuki.)

So what I mean here is, if not exactly what Derrida meant by "deconstruction" (because, let's get real:  I don't understand Derrida), then something close, I think.  Hammett builds into the plot and characters of this hard-boiled detective story more than enough playful, wicked undecideables to undermine every purported certainty of the genre:  point of view, moral perspective, motive, narrative coherence, what have you.  ("What are you rebelling against?"  "What have you got?")

It comes in with the character of Owen Fitzstephan, the novelist, friend of the family of the victims/criminals, and ultimately the villain of the piece.  He is also the Continental Op's doppelganger, and he is that because he's in part a wicked self-parody of Hammett, or a writer somewhat like him.

How is he introduced?  P. 13:  he's mentioned to the Op, who says he knows him:  "We used to drink out of the same bottle."  Of course this is just an expression of intimacy, but it doubles neatly as an expression of identity.  The suggestion that they're connected, alike on a deep level, is strengthened in their first scene together in the book.  Fitzstephan jokingly accuses the Op of having "something in your tone, something proprietary, as in the voice of one who has bought an author for a couple of dollars" (p. 18).  The Op, meanwhile, explains his reluctance to read Fitzstephan's books this way:  "I was afraid I'd read them and understand them" (p. 19).


"Are you - who make your living snooping - sneering at my curiosity about people and my attempts to satisfy it?"

"We're different," I said.  "I do mine with the object of putting people in jail, and I get paid for it, though not as much as I should."

"That's not different," he said.  "I do mine with the object of putting people in books, and I get paid for it, though not as much as I should."

"Yeah, but what good does that do?"

"God knows.  What good does putting them in jail do?"

There's a fundamental identity being established here between the novelist who takes as his subject the endless, and endlessly peccant, variety of the human animal ("I'm a novelist. My business is with souls and what goes on in them," Fitzstephan has already said [p. 21]) and the detective who makes his livelihood on that same variety.

Let's pause to note that Fitzstephen somehow manages to be a parody of both Hammett himself and of writers very unlike himself.  We don't know much about Fitzstephan's books except that they're unpopular and that they're literary - he runs with a literary crowd, and talks pretentiously.  This would seem to constitute Hammett the popular author's swipe at literary authors who may sneer at popular fiction.  And yet Fitzstephan so unabashedly immerses himself in the gutter for inspiration that one can't help but see a little of the hard-boiled novelist in him - Hammett himself, who is clearly not uninterested in motive, in souls.  And knowing that the Op is also something of a homonculus for Hammett (a former Pinkerton himself), we have, in the Op's scenes with Fitzstephen, something like two parts of the author debating himself.

Or not.  Because although their banter shows them at odds with each other, each genially scorning the other's methods and aims, fundamentally they're not all that different.  They're both skeptical of psychological explanations for crime.  The Op's sarcasm is barely disguised on p. 63 when he notes that "the novelist in Fitzstephan was busy trying to find what he called Mrs. Leggett's psychological basis."  And yet we know that Fitzstephan himself is no great friend to psychological explanations, at least of a certain sort - he has authored an article decrying the theory of the subconscious.

So what's going on here?  Is it that Fitzstephen is an old-fashioned literary thinker for whom psychology means more or less conscious motives, understandable by rational analysis?  And is it that the Op, for all his skepticism about anything but the facts, is in fact deeply respectful of the unknowability of motive, of the dark mysteries lurking within the soul?  It's Fitzstephen, supposedly the friend of highspun literary ambiguity, who constantly accuses the Op of being unnecessarily qualified in his accounts of crime:  "after you've finished the story, you can attach your ifs and buts to it, distorting and twisting it, making it as cloudy and confusing and generally hopeless as you like" (p. 110).

What we have here is a debate about the meaning of human action - does it reveal character, psychology, truth?  Can we understand why people do what they do?  Fitzstephan wants to believe we can - and the detective novelist, up to this point, must believe we can.  The whole idea hinges on it.  But Hammett ends by taking the Op's side - taking the side of the side of himself that the Op represents, against the side of himself that Fitzstephan represents.  It's a statement of artistic purpose, in characteristically veiled, impenetrably wry terms.  Hammett's plots are impossibly convoluted, full of motive, too much motive, but in the end we're hardly meant to follow the plots.  "That's the kind of a story it is.  I warned you there was no sense to it"  (p. 111).  The very improbability of the things that are done, combined with the brutal nature of the people who do these things, is the point.  It can't be understood.

That's why it's so devastating when we learn that Fitzstephan is the one behind it all.  Well of course he is:  if Hammett is going to write a critique of the detective novelist, he can't help but point out that the author who thinks up all these dastardly deeds is as criminal in his imagination as anybody in his pages.  But we're told - by the Op, who we trust - that Fitzstephan isn't responsible.  Because he's crazy.  F jokes that he'll use an insanity defense, because who would believe that anybody in their right mind could commit all the crimes he's committed - and he means it, he believes that he's a rational mind getting one over on the world.  But the Op says he deserves to get off for insanity, and this devastates F.  "It's no fun if I'm really cracked," he says (p. 221).

Those who think you can really make sense of the world, who think they've got it all figured out, are the real basket cases.