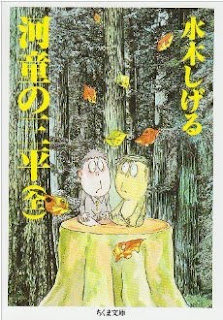 One of the other books I started during our trip to Japan was Mizuki Shigeru's Kappa no Sanpei 河童の三平. Mizuki's enjoying a boom right now - his wife's memoir has been turned into a TV series - and so most of his stuff seems to be in print for the moment. I picked up a bunch, including this.

I got the Chikuma Bunko version, published in 1988. I have Chikuma's versions of several of his other things, including Akuma-kun, and this, like their edition of that, isn't too careful about telling you when and where the stories were originally published. I think what it is is that these editions date from the years when classic manga were just beginning to be taken seriously - that they were being reprinted in adult-aimed formats was already something of a landmark. Serious bibliographic diligence would have been too much to ask.

But I think what I got here was the version of the story that was published in 1968 and maybe 1969 in Shûkan Shônen Sunday 週刊少年サンデー. That makes it a rewrite of the version he wrote for the kashihon manga. The Chikuma version says it's complete (at least that's what I think that there zen means...), but in fact it leaves out a couple of episodes. Still, it was all I could find....

This is the third of Mizuki's great characters, with Akuma-kun and Kitarô: characters and stories he came back to again and again throughout his career, in every medium he worked in. The story involves a human kid named Kawahara Sanpei who, everybody thinks, looks suspiciously like a kappa. In fact, we soon learn that one of his ancestors was a kappa. Anyway, he ends up meeting a real kappa boy, and they switch places. Sanpei goes to live in kappaland, and the kappa kid, Kanpei, goes to live in Sanpei's home. The joke is that nobody in Sanpei's house or school notices.

The book contains two major story arcs, one a sort of comedy of errors in which Kanpei's skill at swimming gets Sanpei, who can't swim, entered in a national swim meet, and it's only magic farts that save him; the other is an extended quest story in which Sanpei and Kanpei have to track down magic items hidden by a long-ago king of the kappas. But even these two stories are less episodic than they sound - they're united by a long story arc concerning Sanpei's mother, who left him when he was a baby, and by a recurring entanglement with a Death God who's trying to trick Sanpei into coming to Hell with him.

So, like Akuma-kun, this is a character with a story, at least in general terms: in both cases each time Mizuki revisited the character he retold this story, with minor or major adjustments. This doesn't seem to have been the case with Kitarô, by the way; his story seems mostly to be discrete episodes, many of which were retold, to be sure; Kitarô is a character and a milieu more than he is a story. (Except for my favorite Mizuki comic of all, the very trippy Kitarô yawa 鬼太郎夜話: this is one long story.)

I think his treatment of kappa was much more interesting in Kappa sen'ichiya. Here they're much more kid-friendly, and much more just like funny monsters. But that's the book's only real weakness.

Sanpei himself is pretty uncharismatic, but of course, that's part of the point. He's a classic Mizuki sad-sack protagonist, a loser at everything he tries, and plagued by bad luck that actually crosses over into tragedy. My favorite parts of this, in fact, were places where Mizuki made Sanpei suffer the kinds of things kiddy manga don't usually touch on - he's got abandonment issues, poverty issues, and death issues. Jeez, at the end we actually have to watch him die, then watch his ghost wander around trying to convince himself he's not really dead.

And the doubling effect with Kanpei is really interesting - why can't people tell them apart? Why is Kanpei in some respects a better human than Sanpei? And then the whole fart motif is just plain awesome. And then, every time you think it's falling into a pleasant morass of crude humor, we get the Death God, who is himself pretty crude and humorous - but then again, he's Death, and he never lets you forget it.

In short, it's more of Mizuki's patented mix of childlike humor and dark, dark adult metaphysical realism.
Posted by Tanuki at 11:28 PM No comments: 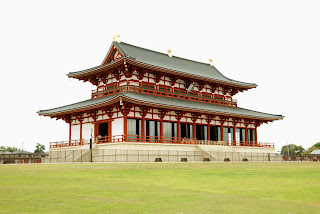 The frustrating, or maybe tantalizing, thing about visiting Nara has always been that it's not really there anymore. That was never really true, of course: you'd go because of the fantastic Buddhist temples and one super-awesome Shinto shrine that are there, and maybe also because of the museum. But those are there because the sleepy little country town of Nara was, in the 8th century, Heijô-kyô, capital of Japan, the country's first permanent capital in fact, patterned after the shining Tang Chinese metropolis of Chang'an, and pretty impressive in its own right. But it stopped being all that as the 8th century drew to a close, and for most of recorded history the temples have been all that remained: the great capital was dismantled, and the city plan was obscured, largely returning to farmland. A lot of it's still that way today; what isn't is faceless suburban sprawl (Nara is within commuting distance of Kyoto and Osaka).

That's the way things were when I first visited in 1993. Awe-inspiring temples, and beyond that, just rumors that there was once a capital there. The city center is now over by where the temples are, and the land that was once the imperial palace was (in 1993) under fields and railroad tracks.

This year is, as I think I mentioned, the 1300th anniversary of the establishment of Heijô-kyô, and for my money the best thing about it is that it convinced the country to rebuild the Imperial Palace there, part of it anyway, according to what ancient records and archaeological discoveries have told them it should look like. They've built the Daigokuden, or Audience Hall, the southern or Suzaku gate, and some walls enclosing the palace compound.

This is a very good thing. For the first time, you can get a sense of what this capital might have looked like. If you go this year, you can go through the Daigokuden, and also visit an on-site museum that boasts a replica of one of the kentôshi boats and a 3-D CG video of the whole ancient city. There are rumors that these latter installations, and the whole open-to-the-public thing, might not last beyond this anniversary year, so go quickly if you can. It 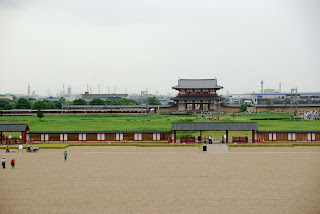 would be a pity if it all closed for lack of funding, but then the world is going to hell in a handbasket.

On a personal note, seeing this restoration in its completed state was peculiarly satisfying, because in a way Mrs. Sgt T and I have kind of watched it go up. Her research takes her to Nara almost every year, and I accompany her sometimes, like I did this year. The Suzaku Gate was rebuilt in 1998, and I first saw it a few years later, with her - not being a classicist I'd heard nothing about it, and was flabbergasted to see this beautiful thing in the rice paddies from the windows of the Kintetsu train.

Every time we've been back since we've seen a little more of it done. A couple of years ago was the last time, and then we tramped all around the grounds, where building foundations are laid out - we saw the hulk of the Daigokuden, under construction, saw the Suzaku Gate up close for the first time, and ran for our lives from some kind of humongous insect that swarms down out of the trees at dusk in summer. (There are creepy-crawlies in Nara: this summer the missus got a rash on her arms from some poisonous caterpillar hairs that were blowing around in the breeze. Doctor said he sees it all the time.)

So here are some pix, courtesy of Mrs. Sgt. Tanuki. The first is the Daigokude 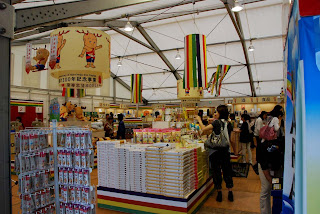 n, the second is the Suzaku Gate as seen from the Daigokuden (that's the wonderfully named Kinki Railroad, or Kintetsu, in front).

And the third is the interior of one of the on-site souvenir shops. That fella is the Official 1300th Anniversary Mascot No. 1, "Sento-kun." He's supposed to represent an Indian Buddhist monk (the Nara period is also when Buddhist really took hold in Japan). The antlers are a tribute to the free-roaming deer that populate the parks and temples in "downtown" Nara.

You'll be pardoned for thinking that he's a singularly unattractive mascot. You wouldn't be alone: he's been the target of ridicule ever since he was announced in early 2008. Even his name is lame: it means "Moving the Capital"-kun, or Little Mr. Moving the Capital (i.e., to Nara). That's it. It's almost as clunky in Japanese as in English.

To be fair, he does kind of grow on you, especially after you've been hearing people rag on him for two years. Although I'm still not sure pity is the primary emotion you want people to feel when they see your mascot, he does kind of fit in with the kimo-kawaii aesthetic that's popular right now.

So unpopular was Sentokun that they introduced a buddy for him a few months later in '08: Manto-kun. At least his name is clever. Sen also means "thousand," so the next one up, in the Japanese numbering system, would logically be "ten thousand," or man: so, Manto-kun. Plus, "manto" means "cape" (from "mantle"), and he wears a cape. Unfortunately, he's also a deer with a building on his head. Strike two.

The final indignity was when some local Buddhist clergy got upset that Sentokun was seemingly making light of Buddhism - for chrissake, he's got antlers growing out of his head! So they came up with a third character to foist upon the public: Naamu-kun. He's supposed to look like a childhood version of Prince Shôtoku, who was instrumental in establishing Buddhism in Japan, and he's meant to teach kids Buddhist values. Even his name is a mantra. (Who says Japan doesn't take religion seriously?)

Strike three.
Posted by Tanuki at 11:35 PM No comments: