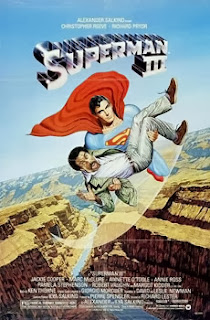 My take on this movie is pretty much the same as everybody's, I think.  It's not great - in fact it's really
awful in parts - but then again it's not as bad as the fourth film.

The awful parts - where to begin?  Richard Lester is still directing it as if he's embarrassed by the whole thing.  Not too embarrassed to cash the checks, I guess, but certainly not willing to invest the thing with any dignity.   And while my particular subject-position on all the superhero movies is that I'm not a superhero-comic reader, still I can tell that the villain here is not an integral part of the myth.  It doesn't surprise me to learn that he was written precisely as a not-Lex Luthor when Gene Hackman's services couldn't be procured.

Then there's Richard Pryor.  Now, I don't have a problem with the idea of putting Richard Pryor in a Superman movie.  I mean, I could probably accept him if the part was written right.  But the racial attitudes that underlie the writing of this part are just odious.  It's wrong on so many levels.  But that was the Reagan era for you.

But then there's the extended sequence with Clark Kent vs. Superman, or good Supe vs. bad Supe.  This is the scenic part of the Uncanny Valley. We're seeing things that just shouldn't be, and they're wonderful.  It works on all the levels that the rest of the movie fails on.  Visually, thematically, narratively.  The film is worth seeing for that.
Posted by Tanuki at 10:47 PM 1 comment:

Yes, even a Deadhead, prog-sympathizer, soft-spot-for-folk-having, no-New-York putz like me likes him some Brother Reed.