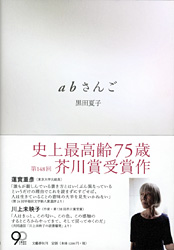 I'm not entirely sure which camp I'm in.  I'll readily confess that I was barely able to follow it (and I'll describe the difficulty in a bit), but the one thing about the story that's absolutely clear is that it reads the way it does on purpose.  This is an artistic choice, and given how openly it courts unintelligibility I'd have to say it's a bold one, and I'm in the business of applauding that.  It's experimental and I salute that.  On the other hand my own tastes run decidedly to the popular, and even in serious literature I do value things like clarity, precision, communicativeness.  I can't say I enjoyed this story, not at all.  It was a slog to get through it.  And what I got from it, after wrestling with its difficulties, seemed commonplace enough that I didn't quite feel it was worth the effort.

What makes it difficult?  Kuroda uses basically every distancing device available to her.  Let's start with the thing that all the 30-second TV news reports in Japan mentioned:  the story is written horizontally, left to right, like a Western-language book.  There are certainly books written like this in Japan, but not fiction, normally;  certainly not serious literature.  This one is.  You open it on the right.  You read it sideways.  This doesn't sound like a big thing but it's definitely an alienating effect.
More alienating is her decision to to use only minimal kanji.  Her sentences are mostly hiragana.  Those who can read Japanese will know how difficult a page of Japanese written only in hiragana can be;  those who can't may approximate the sensation by imagininganenglishsentencewrittenwithnospacescapitallettersorinternalpunctuation.  It's not a perfect analogue but it's in the ballpark.  Moreover it's not like she's adjusting her syntax so that she's, for example, only using pure-Japanese words, which are arguably more intelligible in hiragana;  she uses plenty of Chinese-derived compounds, but often without the kanji, making it difficult to figure out which compound she means.  In other words, it's not like she's writing in a childlike language, or a very traditional mode, either of which would lend themselves to hiragana-only writing;  in fact, sometimes she'll throw in a rather difficult kanji or compound where you don't expect it.  She's doing this, in other words, not to emulate a particular voice, it seems, but purely to force her readers to work - to slow down and think about her sentences in order to glean even a surface meaning from them.

She also employs a maddeningly circuitous mode of expression, with drastic and seemingly unmarked shifts in subject and topic midway through her (long and winding) sentences, so that they're quite hard to follow.  And she chooses to withhold crucial information from her readers, employing ostentatiously vague expressions where the normal expression would be too precise.  Loosely the story is a memoir of a grown child who lost one parent as a child and the other parent as an adult - and Kuroda manages to get through a 78 page story without letting us know what sex the child is, and which parent died first.  That's just an example.  She'll construct an entire episode around the sharp, evocative smell of a peeled fruit, but not tell us what kind of fruit it is, only calling it "a drupe."

What she's doing is pushing the Japanese language to extremes of imprecision, but in a strangely precise way.  This isn't the vagueness that some people impute to writers like Kawabata, who are more interested in suggestions of emotion than the niceties of intellect;  at least, I don't think it is, because her style makes it difficult to extract much emotion from the text.  Rather, I think the difficulty of the style itself is the goal, mostly;  it's difficult in exactly the measure and form that Kuroda intends.

What I can't quite explain, though, is why.  Is this difficult prose opening up new possibilities for expression?  Is it reaching new nuances of meaning?  Is it extraordinarily evocative in its abstract way?  I don't think so.  But I may be the wrong person for this;  I can imagine others really loving it.

I haven't said much about the story, the things that are said in this tortured way of saying things, because frankly I found the story told to be so conventional and commonplace as to be hardly worth remarking on.  If this had been written in any kind of normal style, it would have been an utterly standard piece of junbungaku writing:  it's memoiristic, impressionistic, focusing on mostly childhood memories with concrete details (objects, places, people) in snapshot moments meant to suggest larger movements of time.  Lots of nature imagery, lots of imagery connected with growing up, annual observances, small interpersonal traumas.  Utterly unremarkable;  but then, with every kind of zuihitsu-ey, shi-shōsetsu-y piece like this it's the style that matters most.  So here too we're back to thinking about the way Kuroda writes.

The story is getting probably more attention for the biography of its writer than for its content.  Kuroda was 75 when she won the prize, far and away the oldest person ever to win it.  Keep in mind that this is ostensibly a prize for new writers, which means that it tends to go to young people;  many writers debut in their 30s or 40s, so middle-aged winners are hardly rare, but this is something else again.  A cynic would say that, in a rapidly-graying society, this is a smart choice, something to make the prize seem relevant to the ever-increasing numbers of retired people who now have time to do things like read literature or even write it.  Life begins at 65, and all that.

The filler stories in this volume were all written in the 1960s, during Kuroda's first stab at a writing career.  She won the Yomiuri Short Fiction Prize in 1963 for one, which was then published in the Yomiuri newspaper;  two sequels to that story were published in a coterie mag in 1968.  They're all collected here - written vertically right to left, so that the book has two fronts, if you will.  You have to turn the book over to get to the other stories.

They're written in a normal style that presents no particular difficulties, and they're marginally more plot-and-character-oriented than the new story.  They all center around a girl named Tamie and her childhood or adolescent confusions and traumas;  mostly they're impressionistic evocations of childhood, full of descriptions of flowers seen while playing hookey, or games played with other children.  But each has a narrative twist at the end;  they feel more like stories in that sense.  I'm not sure how I'd rate them, actually;  if she hadn't written ab sango, I can't imagine these stories would have ever been rediscovered.  They're easier to understand, but they're much less memorable for that.
Posted by Tanuki at 8:56 AM 3 comments:

I've been reading Hammett in tandem with Chandler, in pairs, and I find they go well together.  The 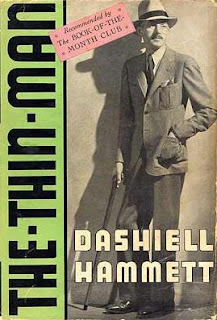 two giants of the hardboiled detective genre, and I can't pick a favorite:  whichever one I'm reading at the moment I tend to think is better.  But of course there are differences, I'm discovering, and one of these is the obvious one that Chandler's books are much of a piece, since they center around the same point-of-view character.  So far Hammett's, on the other hand, are all completely different.  Sam Spade is very different from the Contintental Op, and both are different from Nick Charles.

The big difference, of course, is that Nick has Nora.  He's not alone.  On a pure entertainment level this allows for the witty repartee that has made this book such a favorite of so many for so long;  I can see why there were so many attempts to film sequels - you just want to stay in Nick and Nora's company as long as you can.  The solitary Spade or Op (or Marlowe) banters, but usually in a semi-confrontational way with at least semi-antagonistic interlocutors.  Nick can joke with Nora in perfect ease.

On a deeper level this is an incredibly significant change.  The hardboiled private eye is defined by his solitude.  This is true of Spade, the Op, Marlowe, Easy, O, and everybody else I can think of.  The genre is all but synonymous with a moral solitude - me against the world, me the last oasis of sanity in a desert of evil and absurdity, me.  The private eye may have allies, but only of convenience - cops are usually looking for an excuse to bust his balls, clients are usually lying to him, friends are either powerless or untrustworthy.  The noir thematizes solitude.

But Nick has Nora.  Now, a trusty sidekick and confidante is not necessarily a rarity in detective fiction more broadly:  indeed, it's an archetype.  Holmes has Watson, and that pattern has held true in about any number of recent mystery series on American TV alone.  But that world is a brighter one than the noir world we're talking about here.  The typical noir admits of no such companionship.

What The Thin Man does so successfully, then, is to bring in this rewarding, heartening sense of companionship while maintaining the hardboiled nature of the story and the world it's set in.  We don't doubt that the streets in this book are as mean as those in Red Harvest or The Maltese Falcon.  We don't doubt that corruption and betrayal are just as rife, just as likely, as in those books.  But we - inhabiting Nick - aren't as touched by them, because of the vibrant, capable, knowing, and redeeming presence of Nora.

Not that she's an angel - that would destroy the mood.  Rather, she's us, the readers:  we're inhabiting Nick's perspective, but our position is actually Nora's.  Left out of Nick's calculations, discovering his deductions when he chooses to speak them, and most of all learning about his world along with Nora - with enthusiasm and salacious glee.  She's less a sidekick then a sponsor and fan.  Hammett allows us into the book that way, but also allows Nick escape.  It's still properly his world, this morass of low motives, but he doesn't have to live in it anymore.  Nora has delivered him.
Posted by Tanuki at 9:06 AM No comments: