Last year the Tanuki went on a disco binge.  It was therapy.  You don't need to know for what. 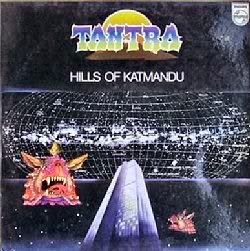 He blew a lot of money on disco records, some he knew, some he knew of, and some that were utterly new to him.  Many of them proved quite delightful.  And so here's "Hills Of Katmandu" by Tantra.  All sixteen minutes and twenty seconds of it.

Here's some background on it.  But what you really need to know is that it's got it all.  Everything is in this track.  Like the 12" cover suggests, it's got skyscrapers and weird mechanical lionfish and the Universe in it.  It takes you all the way there and leaves you.

It's a perfect example of how the prog aesthetic infiltrated a lot more in the '70s than anybody is willing to admit.  This record derives a lot of its power from being organized like a prog-rock mini-epic, a suite.  The hard-charging guitar-driven part that serves as overture and reprise is the only reason the middle part, the dreamy section, works.  On its own that dreamy section would have been fairly forgettable.  It would have just been a nice poster of the Universe on your bedroom wall.  Framed like this, with the rampage of the mechanical lionfish, it transcends: it whispers in your ear that someday we really will build a skyscraper to the Universe.  And this will be the elevator music.  It will take sixteen minutes and twenty seconds to reach the top floor, and when the doors open

So, yes, masculinity's in crisis in The Sun Also Rises.

Is masculinity always in crisis?  It always seems to need asserting, and what Derrida taught us is that if something needs asserting it's because it knows it's in danger of being disproven - an assertion of fact is an admission of nonfactuality.  An assertion of manhood is the product of a fear that manhood is not, in fact, present.

Certainly it's all but completely absent in this book.  At a basic level the book is about a bunch of guys trying to get the same woman.  Lady Brett Ashley is the phallus in the Lacanian sense, the awesome thing that would bring the possessor power because it moves by itself, the thing they all want and can't have.  But none of them can have her, because (or therefore) none of them are real men.  Her fiancee Mike is emasculated by being bankrupt, and possibly by being a Scotsman with a chip on his shoulder about the English, and by being as a result of these things a nasty drunk.  Her brief dalliance Robert Cohn is emasculated by being Jewish - the narrator and all the characters are unapologetically anti-Semitic, seeing Robert as an outsider and less than a man.  The narrator Jake is literally emasculated, of course:  his war wound.  Bill's the most interesting character in this regard, because there's no particular weakness or flaw that prevents him from winning Brett and thereby proving himself a man, but he fails anyway and seems to reconcile himself to it quickly:  he's just not strong enough, period.  And of course that's the real problem with all of these men - bankruptcy, Jewishness, and the war wound are all just excuses.  That's the point of the last line, when Brett (almost in love with Jake) muses that they could have had a lot of fun together, if only...and he replies, "Isn't it pretty to think so?"  I.e., he knows that even if physiologically he were a whole man, he wouldn't be able to keep her.

But what about the bullfighter?  Romero is surely a real man, right?  He's the one who leaves Brett, although she tries to tell herself that she left him.  He's the one figure in the book who Jake describes with unalloyed admiration, in terms of barely-disguised sexual attraction:  he masters the bulls, and masters Brett.  And yet.  And yet Cohn beats the shit out of him.  Romero survives it enough to triumph in the bullring, but doesn't the anti-Semitic logic of the book suggest that Cohn's beating him in a fight unmans him at least a little?  And the society of bullfight aficionados shun Jake because he introduced Romero to Brett - clearly they feel that she's a corrupting influence on him, which suggests that by dallying with her Romero is endangering or lessening his manhood.  If Brett is right that she at least partly left him, because of his youth, then he's tossed into the same pit of non-men as the rest of them;  but even if he left her, still we can't imagine that he's unchanged by the encounter.  Isn't he potentially infected, destroyed, by his brush with these decadent expatriates?

Nobody's whole, nobody's a real man.
Posted by Tanuki at 1:10 PM No comments: