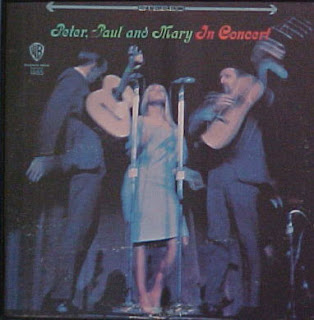 Peter, Paul & Mary In Concert, from 1964, is the second album in their Bob Dylan Interpreter phase. And remember what they did with "Blowin' In The Wind"? They do the opposite of it here. The album kicks off with the bard's other great protest anthem, "The Times They Are A-Changin'," and just like they did with the earlier song, they give it the full benefit of their folk-pop professionalism. Harmonies that are lush, powerful, even thoughtful (note how Paul's part descends on the line "sink like a stone"), and rhythms that are smoothed out and filled out. They do the same thing to the key phrase here that they did earlier: round it out and thereby, hopefully, anthemize it.

The problem is, Dylan himself had undergone a change between "Blowin' In The Wind" and "Times Changin'." On the former he was diffident and coy, on the latter he was confident and strident. Not to mention pretty canny about the way he put his songs across. The result is that his arrangement of "Times," specifically his delivery of the title line, is already anthemic: bold, direct, memorable. What's more, it's hooky. Whereas PP&M's arrangement actually blunts the song's impact. Dylan's is the better pop record.

The Tanuki loves live albums. Sometimes he thinks all music should be recorded live, in front of an audience, with no overdubs: what's lost in fidelity is often (though not always) made up for in energy. That's the case here.

But at the same time the Tanuki always has the urge to tinker with live albums. In this case, you may notice that this double-lp set is about evenly split between numbers taken from the trio's three studio albums and songs that hadn't been released in studio versions. Hearing the familiar tunes live does give you a sense of how their repertoire sounded in its natural habitat, as it were; and there is some added energy, audience interaction, etc., that make them worth having.

But cull out the new numbers, and leave out the twelve-minute cringeable stand-up routine that is "Paultalk," and you have basically a single lp's worth of new tracks. A respectable album in its own right, extending their oeuvre significantly, and in a way that's symmetrical with their other albums.

When heard like that, what do we have? Another Dylan track. A couple more nifty blues-gospel things. Some solo spots. And some humor.

The blues-gospel things are the highlights for me. Their version of Blind Lemon Jefferson's "See That My Grave Is Kept Clean," a.k.a. "One Kind Favor," may be their most assured blues performance: they add a lilting Appalachian flavor while somehow retaining the grittiness of the song. And "Jesus Met The Woman At The Well" is one of those moments when you can hear the folk revival yearning toward a rock sensibility that hadn't yet been articulated: it has the groove, the drive, the bite that made electricity necessary, and yet almost unnecessary.

Does humor belong in music? Frank Zappa once posed the question, and of course he was expecting an answer in the affirmative, at least from the elect; I think part of the reason I've never been able to really get into Zappa is that I tend to answer in the negative. Humor tends to wear thin with repeated exposure, while most music is designed to gain in power with repeated listening: there are a few humorous songs that I find bear up well over time, but they're mostly those in which the humor is a mood, a quality, rather than a matter of punchlines.

Viz. two of the humorous tracks here. "Car Car" is a take on the Woody Guthrie children's classic. PP&M take it as an opportunity to have a little fun - shared, perhaps forced, doofy bonhomie is the aspect of the folk revival most effectively skewered by A Mighty Wind - and so they each voice different kinds of cars, changing the arrangement a little each time. In 1964 this was probably pretty funny - certainly you can recognize the cleverosity of it even at this remove - but it's also a little bit excruciating. Especially when the singing gives way to one of Paul's Bill Cosby-esque routines.

"Blue," on the other hand, is listenable. This is their version of the old children's song about a hunting dog. Peter's spoken intro is wonderfully droll, a glimpse of how they were thinking about these children's songs. Their run through the song proper is nice. But that's just a jumping-off point: they then ask us to imagine what the song would have sounded like if it had been modified by a "nasty unscrupulous modifier" of folk songs, and made into a rock and roll song.

What follows is an affectionate (?) spoof of top-40 rock'n'roll circa 1964; it's interesting, coming from a trio who would, in just a few years, be singing "I Dig Rock'n'Roll Music" (but how sincerely?). I mean, the college-crowd smugness of the folk revival is on full display here: like college rockers of every subsequent age, they clearly prided themselves on their superiority to top-40, and allowed themselves to indulge in it only with the safety net of irony. But on the other hand they have a point: there was an intellectual ambition, a social seriousness, about the folk revival that wasn't always in full evidence in top-40. Meanwhile, the success of this satire depends on the skill with which they pull off their pastiche, which is considerable. They sell it, with a sheer musicality that would save them when they realized they needed to embrace electricity. Like I say, this track is listenable: it's musical, and the humor contributes to the musicality, even when it doesn't make you laugh.

But I'd still rather hear the Byrds' version of "Blue." Roger McGuinn had come straight out of the folk revival (he was one of those multi-instrumentalist anonymous accompanists who helped the singers fill out their sound - PP&M, for example, used bassists, but never credited them on their records), but here he doesn't put himself above either the song or the pop-rock style in which he decides to deliver it. With the help of Gene Parsons's nifty stickwork and Clarence White's spry country guitar licks, McGuinn finds the childlike heart of the song. It's psychedelic squaredance music, but it's also the perfect picture of a boy's love for his dog. No irony required.
Posted by Tanuki at 11:42 AM No comments:

Everything is not a (or an) remix

Freddie deBoer is back, and I didn't even know I missed him, but Lord, I think I did. Not only is he just about the Only True Liberal (I'll let you poke around on his blog for that one), but he's also a borderline disaffected academic humanist. Unabashed support for unions and unapologetically intelligent cultural criticism. Tally ho.

Like today's screed, about how "everything is not a remix." He takes a lot of good swipes at a lot of good targets, and I'll let you discover most of them for yourself. One of the less obvious, despite the title, is the insecurity of the aging intellectual who knows perfectly damn well that there's nothing really new about "remixes" or "mashups" as manifestations of intertextuality, but who goes along with the techno-utopian claims on their behalf made by the young, for fear of looking superannuated. 'Cause there's nothing worse, in 2011, than looking like a cranky old man, I guess.

Life is complicated. Human beings are complicated. To understand them takes work, and time. (Even pop culture is complicated - it seems to be deBoer's blind spot in this article, but hey: we all have our synchronic idiocies.) But we don't want to know that anymore.
Posted by Tanuki at 3:14 PM No comments: