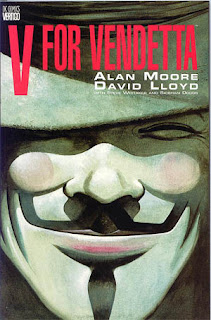 Picked this up at Powell's, figuring it was time I started giving myself more than a nodding acquaintance with some of the English language graphic novel landmarks.  I expected great things from this.

And I have to say, I was a bit disappointed.

Art:  I like the mostly outline-less heavy black art.  It has something of a German expressionist woodcut feel to it.  I hate the pastel colorings, though.  It's an interesting idea, but has nothing at all to add to this particular story.  (I know that it was originally published in b&w and it was the American reprint that added the colors, but it was Lloyd himself who did them:  I don't blame Vertigo.)

Story:  A classic, to be sure, with that familiar literate pithy excoriating Moore writing.  But to be honest, as a script it got a little talky in the last third, not to mention preachy.  The ideas were pretty clear already, and V eventually goes from being a charismatic enigma to an annoying blowhard.  (I grant that part of this may be Moore's intention.  But I doubt all of it is.)

Overall:  This suffers from a known issue with ambitious graphic novels where the script and art are by different parties:  both are trying to raise the stakes independently, and they do that by each honing their individual craft, and in the process destroying a lot of the comics-ness of the thing.  (I think McCloud talks about this, although not w/r/t this title.)  That is, Moore's writing is brilliant but way too much for the medium - too many words, too much literary posturing.  I have fewer issues with Lloyd's art (color aside), but I feel like he's trying to cram so many panels into each page to keep up with Moore's monologues that the stories can't really get going in a comics way.  Thus, script and art are independently quite fine, but for me at least don't really fuse together in the way that the best comics do.

But then again I'm probably spoiled by manga.  I mean, I guess I was expecting this to be, according to the hype, one of the most sophisticated, complex, and adult comics of all time.  But there are a half-dozen things running in Morning alone right now that beat it on those counts.
Posted by Tanuki at 12:48 AM 3 comments: