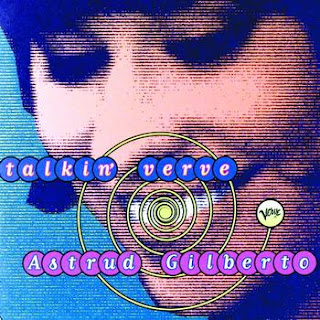 The killer track here is the opener, "Beginnings." Yes, that's a cover of the Chicago song. The first time through it, you'll think: this is shit, Astrud should not be covering Chicago, and this song should not be covered like this. The second time through it, you'll think: well, actually she may have a point there. The third time through it, you'll be in love. The arrangements are almost identical; the one Astrud uses is a little lighter, with a little more beach in the rhythm and a little less grease in the horns, but still it's mostly the same arrangement. And she sings the same melody: all she does is whisper it, rather than croon it like Robert Lamm. But that's all she needs to do. It's a prototypical case of less is more: by whispering that gorgeous melody, she makes it even more powerful, even more seductive. Chicago's "Beginnings" gets you up and dancing; Astrud's sends you flying.

I've loved Astrud's voice for years and years, placing her at or near the top of any barroom discussions of sexiest female singers. But my opinion of her was entirely based on her work with Stan Getz: Getz/Gilberto, sure, but more than that Getz/Gilberto #2 and Getz Au Go Go (I've always maintained that the definitive version of "The Girl From Ipanema" isn't the original, but the live version from #2). I'd always avoided Astrud's solo work for Verve, as I'd read that it was lame.

How wrong I was, if this disc is a fair sampling. And it may not be: this disc concentrates on her later Verve recordings, from 1966 to 1970, avoiding her immediate post-Getz work. Whatever: what's here is really really nice. A lot of bossa nova, to be sure, much of it in lush orchestrations by Gil Evans (tending to the moody: "Berimbau") or Eumir Deodato. But a lot is straight pop: covers of Chicago, the Bee Gees, Nilsson, Petula Clark, the Association. All is interesting, and at best beguiling: "Crickets Sing For Anamaria," "Maria Quiet," "So Nice (Summer Samba)" with the limpid accompaniment of Walter Wanderley...
Posted by Tanuki at 2:29 PM