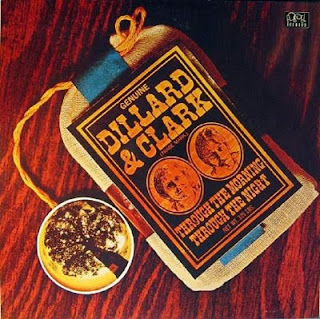 About ten or twelve years ago I developed a real obsession with Byrds spin-off bands.  It started back in high school, really, with CSN(Y), when like most fans I realized that the quartet's paucity of releases could, and indeed really demanded to, be augmented by solo and spinoff records.  When I realized that CSN(Y) was half Buffalo Springfield anyway, my eyebrows shot up, and when I realized that they also had Byrds DNA, well, my little mind was blown.  It wasn't until much later, though, that I seriously began collecting.

When I did, I started with the Byrds, and like anybody with ears, I fell in love with them for their own sake.  But, like most collectors of this scene do, I soon realized that some of the most interesting work to fall off the whole Byrds/CSNY/Buffalo Springfield family tree came from some of the more obscure acts.  Which brings us to Dillard & Clark.  That's original Byrd Gene Clark, teaming up with Doug Dillard (whose namesake bluegrass act is another minor but rewarding limb on the tree) for two albums of country-rock-pop-soul-Cosmic American Music in 1968 and 1969.

Okay, I've just invoked the spirit of Gram Parsons, and any D&C fan will inevitably claim that they were doing what he did, but with less fanfare and notoriety.  It's not quite true.  Yes, they were wedding country and rock, broadly speaking, just like he was, and they were doing it in 1968 just like he was.  But the important distinction to be made is that they were wedding different kinds of country and rock.  The country that Gram was arguing for was honky-tonk, whose wry drunken outlook matched perfectly with the stoned hippie pop-rock that the McGuinn-led Byrds were doing - so perfectly that it looks obvious in retrospect.

The country that Doug Dillard is bringing is bluegrass:  something a little more back-country, and a little less easy to mingle, than honky-tonk.  And Gene Clark was never much of a rocker - he was a sensitive balladeer.  He took to rock, but through folk:  his talent, probably more than anybody's at the time, was perfectly matched to "folk-rock," however you define it.

What I'm saying is that the things D&C were doing, the ingredients they were playing with, were probably a tougher sell in 1968 than what Gram was doing, and even now what they came up with doesn't sound obvious in any way.  And I say that as a big Gram fan - I don't mean to disparage the Burritos one bit.  But what D&C did was something special, too.

Their first record, 1968's The Fantastic Expedition Of Dillard & Clark, is usually pointed to as the most successful.  Perhaps not coincidentally, it's the one where Gene Clark's influence is most audible.  It's mostly a collection of soft, moody, haunting folk-rock tunes with some unexpected but totally appropriate bluegrass touches.  It really makes for something new, but something as natural and beautiful as the sun burning through the mist in the woods on an autumn morning.

Famously, Gram Parsons kind of lost interest in the Burritos for their second record, leaving second banana Chris Hillman to pick up the slack.  Oddly, the same thing happened to D&C:  the second record (1969's Through The Morning, Through The Night) is much more of a straight bluegrass affair, which suggests that Dillard was the main mover.  But for my money it's just as good.  And if Gene's style was getting submerged in Dillard's, he's just as big a presence in the songwriting.

In fact the most traditional-sounding original on the record, the gospel-bluegrass "I Bowed My Head And Cried Holy," is a Gene Clark original.  You'd never know it.  It's a Jesus-praisin' fast-pickin' raveup that sounds like it roared right out of the Ozarks, and Clark sings it without a lick of his usual self-consciousness.

Unfortunately it doesn't seem to be on youtube in any other version than this cover by an Italian bluegrass band.  But it's well worth seeking out the record.
Posted by Tanuki at 11:13 PM

Love Dilard & Clark, man. Their Beatles cover, Down Let me Down, sublime.