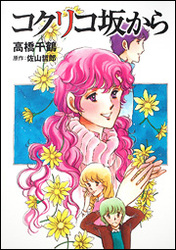 This summer's Ghibli release, Kokurikozaka kara コクリコ坂から, was based on a manga by the same name.  It was drawn by Takahashi Chizuru 高橋千鶴 with a story by Sayama Tetsurō 佐山哲郎, and it was serialized in the girls' comix mag Nakayoshi なかよし in 1980.  It's currently available complete in one volume, in stacks next to all the movie paraphernalia in the bookstores.

Taken on its own terms, it's an utterly typical shōjo manga.  Average.  I guess I mean that as both a pejorative and a mere descriptor.  That is, I don't find the manga really remarkable in any way;  but there's a certain value in reading unremarkable works, too, because they help you appreciate the excellent ones.

The art:  it's undistinguished.  Very few compositions struck me as being memorable or arresting.  At the same time it's obviously using the visual vocabulary of girls' comix circa 1980 in typical way:  the flowers, the floating-in-space emotional moments, the dizzy-angle closeups of eyes, mouths, etc.  It's kind of a primer on the genre.

The story:  same.  Puppy love presented with an accent on beautiful boys just out of reach, and the endless internal sufferings of a girl in love.  Just enough complications to keep the plot going, and a resolution just in time to bring tears to your eyes.  (Theoretically.)

Read in terms of the movie, however, it's fascinating, precisely because Ghibli was able to make such a deeply resonant movie out of such average source material.  They kept the basic outlines of the story (Mer and Kazama's relationship, the boarding house, the school), but changed the setting from "contemporary" (in 1980 the manga was set in 1980) to "past," and thus the tone from up-to-the-minute (in the manga the boys all have Shaun Cassidy long hair) to nostalgic.  Furthermore they drew out the emotional, almost mythic power of the dad-lost-at-sea motif.

Here's an example of what they did.  High-school-student protest is a theme in both.  In the manga, it's a gag:  Kazama manufactures a student uprising against school uniforms, as a way of selling more papers (he's on the school newspaper).  It's mildly funny, but mostly a shockingly cynical parody of the student protests that had swept the country just ten years before.  Takahashi and Sayama's youngest readers may or may not have had any memory of them, but older readers would have, and it's some kind of sign of the new decade that student unrest in 1980 could only be thought of in terms of this kind of ridiculous parody.

In the movie they keep the theme, but transform it into a crusade to save the Latin Quarter dorm.  Notably, this too neutralizes the student-protest theme - what in the late '60s would have potent political significance is recast in the film as pure-hearted young people trying to save their community.  But at least it's taken seriously by the filmmakers - commitment to something other than puppy-love and hairbrushes is held up as a real thing.
Posted by Tanuki at 7:10 PM