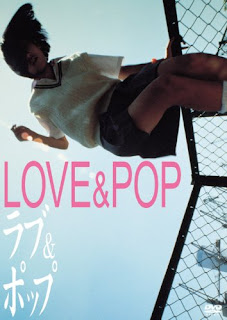 Love & Pop is a film about enjô kôsai (subsidized dating) released at the height of the public hysteria about the phenomenon (1998). I was in Japan during those years - teaching at a high school, in fact - and while I can't pretend to any specialized knowledge, I tend to lean toward the idea that the scandal was overblown: a typical case of adults freaking out about what they imagine (fantasize) their kids might be doing. The kids themselves were alright. On the aggregate, at least.

Which is not to say that this film, which depicts the phenomenon as if it were real, is sensationalist. Working from a Murakami Ryû novel, it's doing what Ryû likes to do with topics like this, which is to aim at somehow humanizing all the participants, so that you understand all their motivations and reactions, while studiously avoiding a dry sociological approach: which is to say, you manage to get an objective sense of the states of mind of the girls and their johns, while simultaneously owning up to your own subjective state of erotic excitement and moral worked-up-ness. Like, Ryû can't help but ogle, and he also can't help but smirk, but somehow he (almost?) convinces you that these responses are honest and worth including in the total picture. Ryû's a dirty old man, and has been since he was a young man, but he's also a smart social observer and critic, and he never lets you forget either.

But, all that's not what's brilliant about this film. What's brilliant about it is director Anno Hideaki's camerawork. He's shooting on DV, and from weird angles - under tables, up through dinner dishes, through the bottom of a beer mug while it's being drunk from, from beds looking up at ceilings, from ceilings looking down at beds. The camera is always moving, the point of view is always shifting, and none of the moves and shifts are dictated by the logic of the narrative. I think this creates two effects.

One is the hidden camera effect. Sometimes it's a security camera, but more often it's the hidden porn camera effect: we're constantly gazing at the high school girls protagonists from odd angles, as if we're hiding in a purse or behind a chair or in the corner, and we're constantly getting closeups of random parts of them - wrists, ankles, shoulders, lips. We're constantly circling around them, or darting under them, or sneaking up behind them. The camera is, quite forcefully, putting us in the position of the voyeuristic male obsessed with high school girls (not a rare type in Japan, a fact that fueled the whole subsidized dating scare - it was plausible because everybody knew lots of guys wanted it to happen like that). Combine that with the way guys seem to jump out of nowhere, offering these girls impossible amounts of money just to have dinner with them (literally, just that), and you get a pretty compelling depiction of what it must be like to constantly be the center of unwanted eroticizing attention. These girls are always being watched, at an age when they're still pretty innocent. How would any sane person process that kind of attention?

The other effect is the dream camera. If the hidden-camera effect in this film is, not precisely objective, but rather radically objectivizing in its view of the girls, the other thing Anno's camera does is to depict their subjectivity in an equally radical way. Often this happens when the camera is a stand-in for the gaze of the main girl, Hiromi, in extreme ways: we see through her eyes as she splashes water in her face/the lens. Once we're used to assuming her perspective, we begin to notice that when the camera is not stealing voyeuristic glances at her and her friends, it's often gazing off into space, at the sky, or at buildings, at gutters or stairwells. The city of Tokyo, specifically the environs of Shibuya, is seen with a mundane and yet somehow luminous beauty in this film, and I think it's because we're seeing it through the eyes of a (putatively) innocent and dreamy 16-year-old girl. She thinks deeply about things, but with the pure inexperienced urgency of the teenager: we know this from the voiceovers. And she herself is constantly looking - she carries her camera everywhere, and is always taking pictures. And what she sees is - peace and beauty, love and pop. Not, usually, the dangers stalking her.

Put these two perspectives together and you get, of course, an excellent correlative to Murakami's approach. More than that, you get a heartbreaking vision of vulnerability and perversion, tranquility and menace, in end-of-the-century Tokyo.
Posted by Tanuki at 11:19 AM