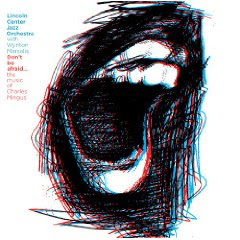 In some ways it's their most puzzling release. As a jazz modernist (I know, all jazz is modern), he's as daring a choice as Coltrane, but then again, since he often wrote for a large lineup, maybe he's not: of all the modernists he's the best fit (unless they want to tackle Gil Evans's work for Miles) (hey, now there's an idea). So why do him? Of course they started out mostly recording Ellington, who was a perfect fit, not an adventurous choice at all; but then again, Ellington was due for a revival, and most of his recordings had been made with primitive technology: for the sonic upgrade, if nothing else, he was worth doing. But Mingus? His records still sound good today. So again: why do him?

I've got no answer. I'm just familiar enough with Mingus to know the above facts (plus, that he's awesome), and not familiar enough to tell you if they're doing anything radical with his stuff here. But I can say: it sounds good, and preserves the humor and weirdness of Mingus's music, if not quite the soulfulness. What I've heard of Mingus never sacrifices grit for glitz; this sometimes does.

So: I've now listened to all of the LCJO's records (except for the ones where they're just Wynton's backing band, playing nothing but his compositions: I figure those belong in a different category). What do I think?

I think they're best experienced live. In concert it becomes clear that their mission is the thing: to present a broad cross-section of the history of jazz, and to do it with a lineup big enough and versatile enough to do it all some justice. And bringing it all together like that, the Duke next to Wayne Shorter, WC Handy next to Fred Rogers next to Dizzy Gillespie, it all makes a certain kind of sense, and of course the music itself is fine.

On record, they haven't quite figured out the best way to present themselves. The discs devoted to the ouevre of a single artist are spotty and even at their best it's hard to think of a truly persuasive reason for their existence. I think their most successful records are the two that just draw from their tours, with eclectic track selections and this historiographical aspect of their work in full swing (pun intended). If they had just released one record a year, documenting each year's repertoire, I'd probably buy them all. That would be something. It might even go further toward making the case for them as an artists' collective to be reckoned with, rather than the combination tourist attraction/PBS special that they seem to be thought of as now.

Then again, that seems to be working out for them. So.
Posted by Tanuki at 1:32 AM