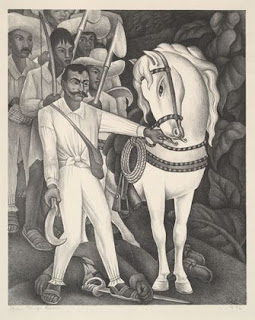 We went to the MFA last night, probably our last visit before we move. We regret not having gone more over the past year. We were busy.

The exhibit in the photography gallery has been changed: now it's work by Edward Weston and his associates from his time in Mexico. Nice, but even nicer is the companion exhibit of prints by Diego Rivera and his contemporaries. It included two works that stopped me in my tracks.

One is a copy of Rivera's famous (it turns out) lithograph of Zapata. You can find color versions if you google it, but this was the black and white lithograph. Pretty striking. Look at the expressions on the faces of the peasants behind him. Look at the horse, like the white steed in 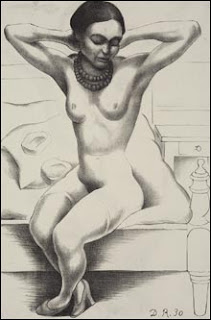 The other was a two-sided print Rivera made of Frida Kahlo, called La Mujer. On the front is a realistic, and beautiful enough, sketch of Frida nude. But on the back (I couldn't find an image online), Rivera had printed the image again, but twice, once facing left and once facing right. At least, that's how the caption described it, but I think he did more. It looked like Frida had six arms and six legs, or a hundred, all fanned out. Sh 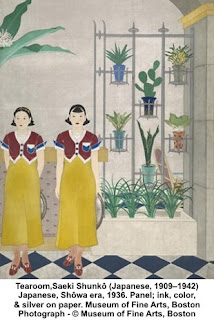 e looked like a thousand-armed Kannon. This was the Frida Kahlo of myth.

An even better exhibit was this one: Shôwa Sophistication: Japan in the 1930s. About half of this was landscape or animal screens that, the exhibit noted, had decorated a wedding chapel in Tokyo until a few years ago, and they looked it: gaudy.

But the other half was a bunch of really striking nihon-ga of men and women in cutting-edge modern situations - the proverbial moga and mobo.

This image of two tearoom waitresses, by Saeki Shunkô, was a highlight. The setting is tres modern, as are the girls' uniforms, and that, rendered in the mostly 2D style of the nihon-ga, is already fun. The placement of the figures, drastically off center, is another striking feature. But look closely at their poses. The girl on the right is stiff from the waist up, looking expressionlessly at the viewer; but from the waist down she's relaxed, in an almost sensuous position. Sensuous, but also maybe recalling the graceful stances of ancient Buddhist statuary. The girl on the left is a little more demure in the placement of her legs, but her upper body is utterly relaxed, and she's gazing off beyond the border of the picture, bored or wistful. Really nice. There's another Shunkô there that's just as impressive, Umbrella - I couldn't find an image on-line. Two girls sharing an umbrella. These girls, one in a red flower-patterned kimono, the other in a solid red overcoat, form just as pleasing a contrast. I guess this was Shunkô's thing.

Then of course the MFA seized the opportunity to bring out their masterpiece by Tateishi Harumi, Clover. They had it out in another exhibit a few years ago. I just love this painting. The colors and composition, the texture (when you get to see it up close: the bamboo grass in the top left just leaps out at you), and all other technical aspects, sure, but more than that the way it captures this wonderful sense of freedom. The girls' school uniforms accentuate that: they're stealing time, stealing leisure. Quite a bold thing for 1934, but not just a political statement (if it is one); a universal human emotion, I think. At least, this painting speaks to me.
Posted by Tanuki at 6:47 AM

I just made an interactive puzzle about the restored Diego Rivera mural of the history of Mexico. If you have a sec, let me know what you think! Thanks! :)