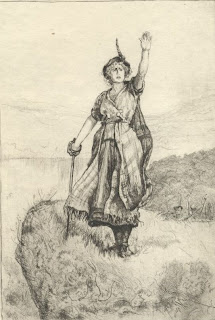 I finished this a couple of days ago, and I've been trying to figure out what to say about it. It's tough, because I'm somewhat stupid in my love for Walter Scott. I read him - once or twice a year for about four years now - for sheer pleasure. Which is not to say that I don't try to think about what he's doing in his books and why. But whatever momentary observations I formulate regarding his themes and his methods are quickly washed away in the glorious flood of his prose.

"I do not know if Helen MacGregor had personally mingled in the fray, and indeed I was afterwards given to understand the contrary; but the specks of blood on her brow, her hands and naked arms, as well as on the blade of the sword which she continued to hold in her hand—her flushed countenance, and the disordered state of the raven locks which escaped from under the red bonnet and plume that formed her head-dress, seemed all to intimate that she had taken an immediate share in the conflict. Her keen black eyes and features expressed an imagination inflamed by the pride of gratified revenge, and the triumph of victory. Yet there was nothing positively sanguinary, or cruel, in her deportment..."

Note how he moves from a calm moment of later contemplation ("I do not know...afterwards given to understand" and all the multisyllabic words in the first half of that sentence) backward in time, while forward in motion, into a scene of intense agitation (picking up the pace with lots of monosyllables). Note the impression of action he gives: the blood, the flushed countenance and disordered hair, verbs like "escaped" and "inflamed," in what is really a static scene - we're just looking at Helen MacGregor as she stands there. Note the careful color balance - her black tresses, black eyes (and sun-darkened features?), set off by the red of her hat, her plume, her cheeks, the blood that flecks her skin, and even the ruddy flames of her imagination. Above all note the sheer beauty of the language: the rhythm of "personally mingled in the fray," the alliteration of "imagination inflamed," the musicality of "raven locks," and the wonderfully heavy qualification of "positively."

Sometimes I think Scott wrote English better than anybody before or since. At its best, as here, his prose is lively and vivid but always carefully composed. He writes in those long, complicated sentences that seem so foreign to moderns - I certainly spent most of my life unable to enjoy them - but once you get the hang of them they're so much more exact, and therefore often more expressive, than what usually passes for literary prose today, not to mention beautiful in a way we don't seem to have much use for now.
Posted by Tanuki at 8:35 PM

Email ThisBlogThis!Share to TwitterShare to FacebookShare to Pinterest
Labels: books