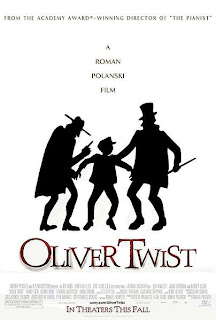 This review pretty much captures my take on Roman Polanski's version of Oliver Twist (2005). It's a letdown for a number of reasons, not least because most of the actors aren't up to the characters they're playing. I was particularly disappointed in this film's Artful Dodger and Bill Sykes. (Some of the grotesques really look the part, however: if I'd seen this film as stills rather than as moving pictures, I'd probably think it was perfect.)

But mostly I think the problem is, as the Little Professor notes, Oliver himself. And, echoing LP, I'll point out that this is a problem with the book, not Polanski's adaptation: Oliver is an almost completely passive creature. What I realized, after this film, is that one reason that halfway works in the novel is because we know he's actually highborn - that he actually doesn't belong in this society. He's thus connected with tropes of the wan young nobleman, and more than that of Christ - passive suffering makes sense because we see Oliver as not of this world. That's what weakens the novel's social criticism (as I've said), but I now realize it helps the novel hang together. Polanski eliminates that subplot, which strengthens the social criticism (and of course makes the story easier to film), but it makes Oliver's passivity more of a problem for the narrative.

The other reason Oliver's mildness works in the novel is because everybody else is such a grotesque. We've already established that Polanski moderates the grotesques - and that the other actors (with the exception maybe of Kingsley as Fagin) aren't very memorable. So, again, Oliver's mildness becomes a real problem.

Unless you're like this guy, and see Polanski's Oliver Twist as not a Dickens adaptation at all, but a depiction of Polanski's harrowing childhood. In which case the passivity makes historical and emotional sense as part of Polanski's vision. Unfortunately, I think this writer is seeing what he wants to see: he admits that what he really wants is for Polanski to film The Painted Bird. And he's right: that would be something. I'm almost tempted to agree with him that Oliver's passivity here is an echo of that novel, not Dickens - but in the end I don't think so.

Rather - and I don't mean to pick on a blogger whom I only discovered looking for other opinions on this movie - but I will - that review strikes me as typical of a lot of what I read on Polanski. It borders on hagiography. I often think I see a willingness to overlook imperfections in his films just because they're his - even an eagerness to interpret these imperfections as marks of a personal vision, and therefore evidence of the auteur's genius. Judgment calls like that are difficult for any critic with any artist, to be sure, but I seem to notice the calls going Polanski's way an awful lot of the time.

I'm not as bothered by certain aspects of Polanski's past as some people are (and that's all I have to say about that), but neither am I as taken by his personality as others seem to be. I'm not sure, now that I've seen so many of his films, if I'd rank him a genius. I think he's made maybe four or five films that I'd rank with the best ever - which is of course a great achievement - but a greater number of imperfect films. And while I sometimes see something interesting going on even in the failures, I don't find his failures as fascinating and revealing as I do, say, Kurosawa's or Coppola's. In short, I'm not sure I see the appeal of Polanski as an auteur.
Posted by Tanuki at 9:20 PM