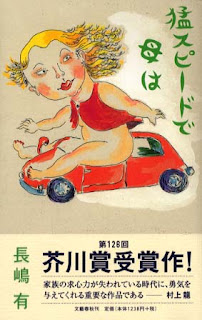 The first story, unusually, is the o-make: “Saidokâ ni inu サイドカーに犬,” “Dog in a Sidecar.” Narrated by a woman named Kaoru of unspecified age; in the present she’s enjoying a rare reunion with her younger brother. Most of the story consists of Kaoru’s reminiscences of her fourth-grade summer.

Her mother leaves at the beginning of the summer, and we follow Kaoru, her brother, their father, and their father’s new lover Yôko through the summer. There are several emotional arcs going on in these scenes, as well as one unexpected plot development.

Kaoru doesn’t really miss her mother. This is due to a couple of factors, the story seems to suggest. First, her parents’ marriage was so messed up, and more specifically her mother was such a difficult, repressed, and controlling person to live with that all Kaoru felt when she was gone was relief. Yôko sort of half moves in to help take care of the kids, and the way Yôko does things is liberating, even to a fourth-grader who can’t quite process things. Second, and not unconnected, Kaoru is an emotional recluse. Normal kids, she reminds us, ask for stuff from adults: candy, toys, attention. Her brother does this, and Kaoru, even in fourth grade, is aware that she can never bring herself to ask for stuff. She means, she can’t ask for candy or toys, but we know she means she can’t ask for attention; maybe doesn’t even know she wants it. But it’s clear that when her mother leaves, Kaoru doesn’t even realize she can want her back; and when her mother comes back and kicks Yôko out, Kaoru can’t bring herself to ask Yôko not to leave her life, even though by this point she realizes that’s what she wants.

Her growing relationship with Yôko is another arc. Yôko is nothing like the neurotic, gloomy woman Kaoru’s mother is; she’s got her own life, her own way of doing things, she reads. She treats Kaoru like an equal, like a friend. We only see Yôko through Kaoru’s young eyes, so we don’t really know her as a person, but we know how much her affection comes to mean to Kaoru, and it’s heartbreaking when Kaoru’s mother kicks Yôko out.

Then there’s the plot. We’re like Kaoru: it never occurs to us that her mother could come back. She does, disrupting this idyllic summer, this temporary parole from rules, and when she does, Kaoru’s father takes off. Then, rather abruptly, he’s arrested—before the summer began he had stolen from his former employer. We’ve known all along that he’s kind of a slacker, semi-employed in shady trades, but we never suspected anything like this. He goes to jail, his wife divorces him, and Kaoru, her brother, and their mother live gloomily ever after.

The title combines Kaoru’s weird metaphor for the affection she feels toward Yôko for paying attention to her. She feels like a dog being kept. She means this as a good thing, although of course we can find it a bit pathetic. In one scene, she gets to ride in a motorcycle sidecar, like a happy dog.

Striking story. For what it’s worth, Nagashima, who’s a man, creates a convincing (to me) female narrator; more than that he creates a vivid individual as a narrator, believable in her childhood hesitation and adult gloom. A deft portrayal of child, adult, and family.

The title story. A young boy named Makoto and his single mother in a small town on the south coast of Hokkaidô. Her parents live in the next town over; Makoto’s mother got married and lived in Tokyo for a time, but she and her husband split up and she moved back into her parents’ house, with Makoto. After a while she gets on her feet and moves with Makoto into public housing in the neighboring town in which the story is set.

The marriage and break-up and time with the parents are all flashbacks. The story itself, the present narrated, is rather sparsely populated by incident. Basically we follow Makoto through a period of a few months while, sort of in the background, his mother gets engaged to a guy, and then he leaves her. Sometime after he leaves her, her mother dies and Makoto and his mother move in with her father, Makoto’s grandfather, for a while, commuting back to their town for work and school.

The story is told in the third person, but the focus never wavers from Makoto: his perceptions and feelings. He’s a quiet, sensitive, somewhat insecure boy; we’re meant, I think, to see him as a character study of a child of a single mother. Uprooted, dependent; bullied at school, but slowly learning not to let it bother him.

His character is sketched out against the backdrop of his mother. She’s not an irresponsible person, but the responsibilities of single motherhood (she has to work full-time) mean that in the eyes of, for example, Makoto’s teacher she’s a subpar mother. We know, Makoto knows, that she’s doing her best, but society expects a mother to be nothing but a mother, and judges her when she’s not. At the same time Makoto’s grandparents ride her somewhat mercilessly for what they perceive as the mistakes she’s made. These are never spelled out for us – we don’t know quite why she’s single, why she moved back in with her parents – but again, we see that she’s giving life her all, and therefore sympathize with her, as Makoto does, even as we (like Makoto, presumably) wish we understood more.

The engagement passes by similarly on the edge of our understanding. There are several nicely rendered scenes of Makoto and the fiancé, Shin’ichi, trying to bond, and a key sequence in which Makoto’s mother and Shin’ichi go away on a day trip and end up not coming back. Makoto thinks they’ve abandoned him, but it turns out they just got into an accident. When they come back, largely unharmed, Makoto is relieved, nonplussed that they weren’t more worried about him, and most of all inarticulately puzzled by the whole situation.

The title (“Mom, at Breakneck Speed”) promises either more humor or more danger than is delivered. There are several instances of the mother bombing along one of those Hokkaido highways, but no tragedy, as the accident with Shin’ichi turns about to be nothing. It’s a vivid title: I want it to mean more.

Which is how I feel about the story as a whole. It does a good job of capturing the particular emptiness of small Hokkaidô coastal towns: the foggy sea just across the highway from a forlorn public housing tower, the spiked tires (this and other details seem to set the story in the ‘80s) and ubiquitous cars, the piddly little municipal aquarium. And the relationships and personalities of Makoto and his mother, and the way the other characters interact with them, are sharply drawn. But the story kind of peters out without really resolving anything. Does Makoto grow? A little bit, maybe, but it’s not conclusively demonstrated.

A let-down after the first story.
Posted by Tanuki at 6:52 AM